In my ‘real life’, that is, while I’m not playing Magic or managing this website’s content, I’m a doctoral student at a university in the United States. But even when I should be paying attention in class or completing vast amounts of assigned reading, I often find my mind wandering, wishing I could spend my time learning to build Classic and Vintage decks at a different school. Which school is that, you ask? 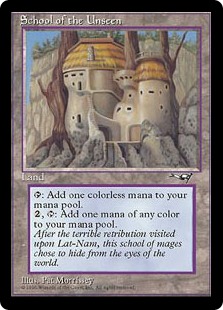 Ah, School of the Unseen. Imagining walking through your doors on the first day of the fall semester feels like studying a Celestial Prism in a Blasted Landscape. In my head, it’s about as good of a learning environment as the College of Henge of Ramos. And, truth be told, I would probably hate going to class each morning; I think I could likely get a strictly better education in open tracts of land like the Unknown Shores or even inside a Shimmering Grotto.

I want to go to a much better school — a school with Rectors and Chancellors and Master Wizards, a legendary place with its own sunny shore so that I don’t even have to fly to Shiv for Spring Break! That’s right, it’s the number-one school on Tolaria: 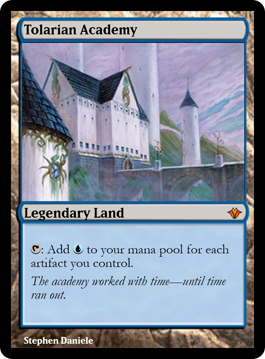 In my current doctoral program, I’m not allowed to do any work on time travel, which is 50% of the reason why I wish I could enroll in Tolarian Academy. The other 50% is that it produces an insane amount of blue mana. So let’s examine the card with strict attention to academic detail: first, with attention to its limited ramifications; second, with respect to its constructed ramifications; and third, with respect to the Magic Online economy.

In the context of Vintage Masters — which is a set, much like Modern Masters, designed for drafting — it is unlikely that Tolarian Academy will have a notable role. Since we don’t yet know the full contents of the set, it is possible that a large artifact-oriented theme, if present in the set, will allow Tolarian Academy to shine as a land capable of ramping a player into high-casting-cost spells. However, since the card is at mythic rarity, it will be difficult to plan to draft around this land’s impressive mana production unless a drafter selects it, or a pair of Academies, very early on in the draft. Of course, it is also possible that the set is so artifact-heavy as to make Academy often worth drafting, but to make any claim about this would be speculative at this point in the set’s spoiler schedule.

Tolarian Academy has had an impressive constructed record. See, for instance, Tommi Hovi’s Extended deck from PT Rome in 1998:

So, indeed, a number of these cards have since been restricted — and at the time, due to the much-dated Legend Rule, whoever got out their Academy first was in significantly better shape — but anyone can respect the deck in the context of its heyday. (Dear opponent: Please draw one million cards with my Stroke of Genius. Thanks!) Tolarian Academy is the engine that can run a deck of this sort because it can power out an obscene amount of mana so quickly and reliably that it sometimes even makes Blacker Lotus look like Gilded Lotus, and it often makes Lotus Cobra look like Lotus Guardian.

But even though Academy is now restricted, it’s still nuts. You can already see it in action online in many popular Classic decks, including everything from Workshop Prison, to Aggro Robots, to Blue-White Control, to Tezzerator, to Aggro-Combo Birthing Pod (will Frost Titan have a home in Vintage, too? 3 Moxen + Academy = 6/6 ICE SHIELD GIANT on Turn 1!). In some Classic matchups, if Robots is able to draw its Academy, it can get out of a horrible situation against an Energy Flux or Kataki, War’s Wage, proving its utility and explosiveness in a variety of decks and board states beyond ramping into a nutty combo. And this is going to be nothing compared to how it feels to rip an Academy when you have Power 9 in your grip (now finally possible for us non-oligarchs with the release of Vintage Masters on MTGO).

And what can we expect from after Vintage comes online to MTGO? Hopefully weird, transformational decks that look like this one, which just won a tournament:

Because Tolarian Academy is already accessible online from the Urza’s Saga flashback drafts that are sometimes available, I don’t think that its printing at the mythic rarity in VMA will shake up its price too much. Though it might go down a little, it’s possible that with increased demand to acquire Vintage-playable cards on Magic Online, its price may actually increase a bit over time.

I hope all of you are as excited as I am to get to (affordably) play with Tolarian Academy next to the Power 9. Let me know what you think about the set in the comments below, and let me know your thoughts about how Vintage’s appearance online this summer will shake up the format. Will it stay the same, or will it become a brewer’s paradise? (I think and hope for the latter myself!)

PlanetWalls
A.J. Goldman (PlanetWalls online) is MTGO Academy's content manager, a Philosophy of Religion grad student, and a semi-competitive Johnny Magic player (emphasis on the 'semi') whose full biography you can read here.