Despite the end of the PTQ sealed season, an understanding of the Theros sealed format can be valuable due to several limited GPs that are coming up. It is still unclear how Born of the Gods is going to change the format, but nonetheless, a lot of things about full-Theros sealed will remain important.

Theros limited is a very unique format. Although both Theros sealed and draft have very specific characteristics that set them apart from previous formats, I think that Theros sealed is much more peculiar and different from past sealed formats than Theros Draft is from other draft formats.

The goal of this article is to discuss which are the features that contribute the most to this peculiarity and how we could benefit from this information both in the deckbuilding process and while making in-game decisions. Also, in the attempt to understand faster and better the new format that is coming, let’s analyze how each one of these characteristics can be affected by the new elements that will change the environment when Born of the Gods hits the shelves.

It is worth noting that this format evaluation is based mainly in the commons and uncommons of the set because those are the cards that truly dictate the texture of the format.

General Overview of the Format

From the start, a lot of people previewed that this format was going to be slow. In a way they were right; the format certainly is not super fast like Gatecrash, but it is also not like Magic 2014 either, where 2-drops almost don’t matter. In my opinion, in this sealed format if you can’t start interacting with your opponent by the time you hit your third land drop, it likely will be too late. This format is about tempo, about developing a board advantage first; if you fall a little too far behind, it is very hard to turn around the situation. In fact, in terms of speed, it is a very well balanced format where you have to go bigger than your opponent but you have to do so at an adequate pace.

A limited format is defined by a lot of things, including the quality and quantity of removal spells, the average CMC of the creatures, how the power and toughness of the creatures match against each other, the mechanics, the mana fixing, etc. For me, the two main features that dictate the nature of Theros limited are the quality of the removal spells in the set and its novel mechanics.

The removal spells’ quality is low in this format. We don’t have premium removal like Doom Blade, Pacifism, Murder or Oblivion Ring. All available removal presents one or both of the following problems:

(1) They are situational. Most removal does not match up well with the creatures at their point in the mana curve, or it gets outclassed by the size of the creatures very fast as the game progress. An example of this is found looking to the two 5-cost removal spells Lash of the Whip and Rage of Purphoros. Both don’t deal with Nessian Asp, a common green 5-drop that you likely will face when playing against an opponent playing green. 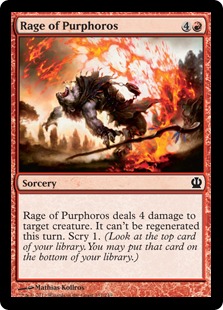 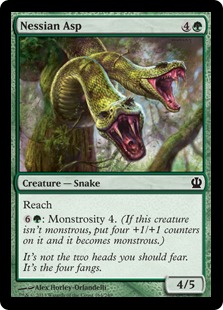 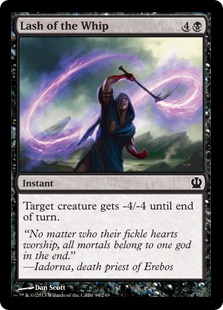 That said, Time to Feed is actually pretty good, as it can provide a reliable removal spell at a reasonable cost. Despite requiring you to have a bigger creature in order not to get 2-for-1′ed, it is not difficult to meet this criterion, as you’ll probably be the one playing with the bigger green creatures. Also, it can trigger Heroic and gives you life to win a close race.

(2) The mana cost is too high for the effect the removal spell offers when compared to what has been the traditional ratio observed to produce similar effects. This means that usually you will use more mana to kill a creature than the amount that was spent to cast it, and that you’ll have to decide between killing something or developing your own board position.

A comparison between Sip of Hemlock and Murder illustrates this very well, and this is without considering that one is a sorcery and the other is an instant. 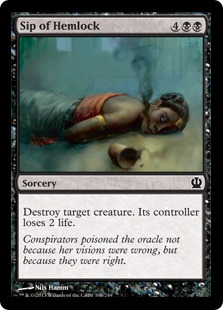 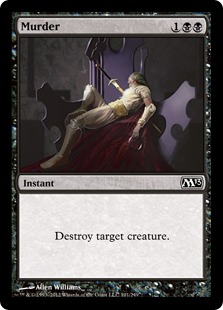 The mechanics of this set are, in my opinion, the other factors that make this format so unique. It is pretty clear that among Theros mechanics, monstrosity, heroic, and bestow are the ones that have made more impact and difference in shaping the limited environment. It is very interesting to note that devotion, the less impactful mechanic in limited, is actually the most important mechanic in Standard constructed right now!

Each of the monstrosity, heroic, and bestow mechanics, in a way or another, helps towards the “going bigger” theme of the format. And that makes all the situational removal spells even more situational. You can no longer “trust” that the sizes of creatures will remain as they currently are from one turn to the next. In a blink of an eye a creature moves out of the range of your removal (or you may not know during your turn which of your opponent’s monstrosity creatures is going to grow during his next turn). I believe that a lot of people learned this the hard way. Everyone experienced or knew about this situation at least once: Your opponent casts a Wingsteed Rider, then it is your turn and you do HAVE the Lightning Strike in hand to kill it, but you chose to cast your 3-drop and develop your board a little further because… well… you can kill that stupid rider later, right? Then it is your opponent’s fourth turn and he slams an ordeal or bestows a Hopeful Eidolon on the Rider, and your Lightning Strike becomes garbage just like that! YEAHHH, GOOD GAME! In this case, heroic was the mechanic to blame (actually heroic plus bestow if we consider the Hopeful Eidolon example, but you understand what I mean), but any other two mechanics can bring a creature out of the removal range, too. 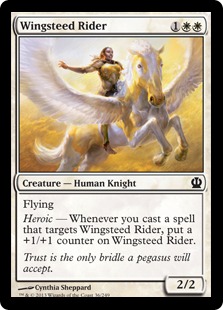 That kind of scenario made me think that in this format, we have to play with our removal in a very similar way to how we play with countermagic in general. Recently, Paulo Vitor Damo da Rosa wrote a very nice piece about playing with countermagic, where he pointed this out:

“With counterspells, you can deal with anything–but only at a very specific time. Compare, for example, a counterspell to a removal spell. When they play a creature, I don’t have to Lightning Bolt it immediately—I can wait, and then, if it becomes a problem, I’ll kill it. With counterspells, I can’t do that. If I miss my window, it’s gone forever. I have to make the decision to counter the spell the moment it is played, without fully knowing how important it’s going to be to the game” (my emphasis).

We have a remarkably comparable situation with removal in Theros limited because the mechanics and the set’s theme in general work very well to make the creatures better and the removal useless. We have to Lightning Strike that Rider immediately; we can’t wait until it becomes a problem, or we will just lose the game if we do not have another way to deal with that in time. Once a creature is bestowed, once it goes monstrous, once it gets a couple +1/+1 counters, we missed our window and probably also the game.

The interesting context of Theros sealed makes the blue “bounce” spells Voyage’s End and Griptide extremely valuable and of high quality in this format. It is without mentioning that Sea God’s Revenge is just absurdly powerful. In previous formats this kind of effect was always valuable, but only in the decks built to exploit it well. This was the case because this sort of effect generates a tempo gain but not card advantage; in fact, you are losing a card in exchange of being ahead on the board. In Theros limited, due to the format being very tempo-oriented, we have a context where this kind of effect is almost always very powerful. Unlike many removal spells, these cards have a good mana cost/effect ratio and provide an efficient answer to deal with the huge creature your opponent is trying to assemble or has assembled. Your opponent will either invest a lot of mana (monstrosity) or cards (enchantments or pump spells to trigger heroic) or both (bestow creatures) to go big, so bouncing their “all-in” investment is a huge blowout.

Another way of framing this feature of the format is that sometimes you do not need to permanently get your opponent’s best creature out of the game as long as you are going bigger too. All you need to do is to make sure that you can delay their game plan while you are executing yours. The bounce spells deliver exactly that. It is not a coincidence that UG and UB are the two-color combinations that have more appearances among the sealed undefeated decklists in the Limited GPs where Theros was the format.

Another important feature of Theros sealed is that you should be always aware of your sideboard. Among situational removal, enchantment removal, and specific color-hate cards, there are several scenarios (matchups) where these types of card can range from mediocre to all-stars. Imagine, for example, that for your GW deck, it is very hard to interact with Wingsteed Rider. You have no reach creatures and no Time to Feed, but you have one Glare of Heresy and one Shredding Winds in your sideboard. Suddenly, you gained two premium answers to deal with a pre-board hard-to-deal-with threat. Be aware!

With all that said, now I would like to provide some of my perspective on how this format’s characteristics may or may not change when Born of the Gods is released. By the time I am finishing writing this, only five cards have been spoiled, and none of them revealed a new mechanic of the set or gave any kind of significant information about what is coming.

I think that we should pay close attention to the removal. If the removal gets substantially better, we can see the format evolving to be more like the formats we have been more used to in the past. But to be honest, I do not think Wizards will do that. They wanted the enchantment-theme of the set to work well, and that’s why they made the removal this way this time. That leaves our hope to see a change in the format in the hands of the new mechanics of Born of the Gods. If they somehow present a philosophy very different from the one used with monstrosity, bestow and heroic, i.e., increasing the size of creatures, then I think we can have a shift in the format’s Tempo-oriented nature.

As for the speed of the format, I really don’t think that we will see a drastic change either way. Let’s see if we get something right, and hopefully this will help you understand the new format better and faster.

Well, this was what I had to share with you. I really hope you enjoyed it and that it was somehow useful to you. I welcome any feedback in the comments.

Thanks for reading,
Rodolfo Maia

RCMaia10
RCMaia10 is a Brazilian Magic player working on becoming more competitive. This year he'll be playing in more tournaments after moving to Europe to complete post-doctoral research. His favorite way to play Magic is drafting, especially the Dark Ascension-Innistrad-Innistrad Draft format.