Jesse K: Hey Jesse T, did you know that team-ups are the cool new thing? Marvel’s Avengers proved definitively that the more cool characters you shove into a thing, the better it gets. There are literally no downsides! Thankfully, the world of pop-culture has taken this lesson well, with Wizards jumping on the bandwagon a mere several years after this trend materialized. What am I talking about? The Oath of the Gatewatch (TM, merchandise coming soon) of course, your and my favorite planeswalker super team. But I still think Magic could be doing more. Let’s help em’ out by proposing our own ideal planeswalker teams.

Jesse T: What’s faster than a Reckless Bushwhacker and more powerful than a Crush of Tentacles? What crosses the two-year gap between the design and release of a set in a single bound? The Wizards of the Coast creative department! Much like the Vampires of Zendikar showed up just in time for the public to lose interest in Twilight, this planeswalker superteam has arrived just in time for my Facebook feed to be flooded with “Make Your Own Suicide Squad” links, and so has this article! In the spirit of the season, I’ll be transparently modeling my team after popular films from 2-4 years ago. What’s your theme, Jesse K?

Brought together by their shared anthropomorphism (sometimes Vraska helps too), this band of do-gooders defends animal rights and pickets companies that use animal testing. Their most exciting storyline involves thwarting an effort by Nicol Bolas to make a coat out of 101 endangered thoctars.

After being discarded by the Wizards of the Coast creative department at a dubious animal shelter, Ajani decided to strike out on his own and find like-minded planeswalkers to adventure with. Ajani’s main technique is writing strongly worded letters to local governments advocating for animal rights, but he also occasionally organizes protests and e-petitions. He is followed everywhere by an entourage of stray cats. 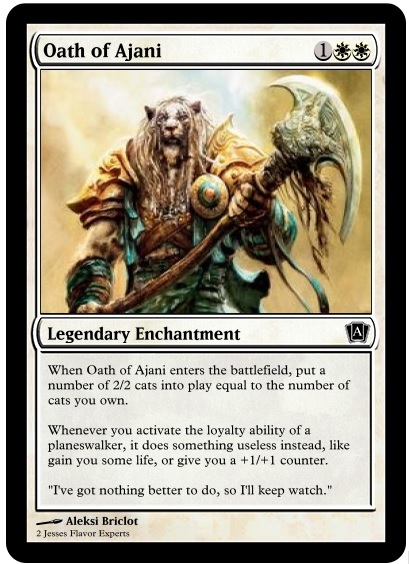 Tamiyo was recruited to join the team at a public library, where Ajani was checking out some Zoobooks for research. Tamiyo, as usual, is driven by her quest for knowledge, which is evidenced by her sitting out most battles so she can catch up on her podcasts. She runs the team’s social media, where she can be found reposting unsourced articles about science and politics. 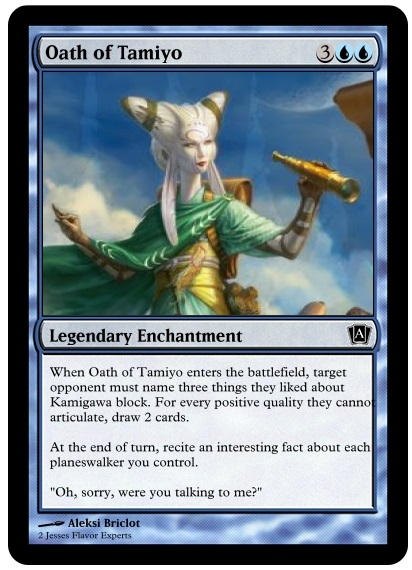 With the Eldrazi on Zendikar, mostly, sorta vanquished, Kiora is free to return to her real passion, searching the multi-verse for adventure and giant sea monsters. Once the other team members agreed to her signing contract stipulation that at least one third of all world-saving missions involve octopi, she became a card-carrying member of the Unusual Animal Friends. Her most common contribution to the team is trying to show everyone that one episode of Planet Earth about the deep ocean over and over again. 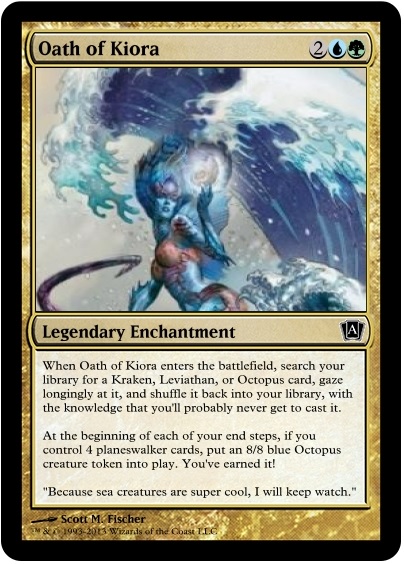 Xenagos lost a bar bet with Tibalt, and joined the squad under duress. However, after saving the day in their first mission together by rowdying up a mob of squirrels, he’s grown to enjoy the planeswalker lifestyle. A loose cannon who plays by his own rules, Xenagos mainly contributes by creating chaos and hoping everything works out in the end. Also responsible for maintaining the team’s bar cart. 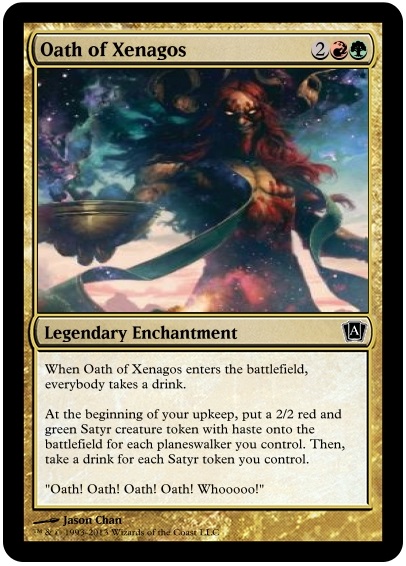 Jesse T: That’s a tough act to follow! Then again, almost anything would be. My team of planeswalkers was brought together by their individual popularity among various target demographics. I now present to you my very own completely original intellectual property:

Concern-Trollers of the Multiverse
by Jesse T

Raised by trees, Arteniss Forestfire loves forests as much as she hates the fire that destroyed her childhood home. In an ironic twist of fate, she was gifted with the power to create and control fire: A power she vows to use only to protect her wooden cousins. When the trees of Zendikar come under threat from the Eldrazi, Arteniss makes sure the Concern-Trollers are first on the scene. 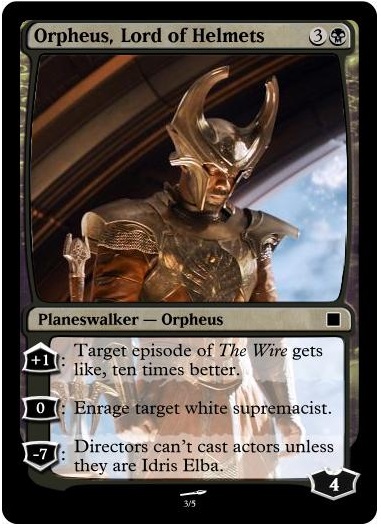 Remember when they cast Idris Elba as Heimdall and some people got really upset about it, implying that it’s plausible that someone could forge a magic hammer for a thunder god, but not that they could be black? Of course you do! Geeks love Idris Elba. I now present to you the completely unrelated Orpheus, god of weapons and master of the cosmic forge. Orpheus is the group’s primary strategist and sobering voice of reason. He’s super splashable (Cast him in anything!), and his second ability costs 0 because he doesn’t actually have to do anything for that to happen. 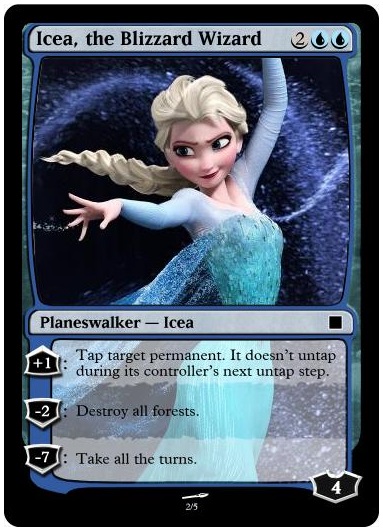 Arteniss’s ex-nemesis is Icea, with the power of cryokinesis. Fire vs ice is a battle as old as hot vs cold, red vs blue, and elephants vs horses, but these two one-time foes were brought together by the common threat of the Eldrazi menace. When the Eldrazi destroyed all the snow in Sejiri, they went too far. As her name implies, Icea’s ice powers are formidable. She can freeze creatures, lands, and even other players! Arteniss and Icea’s teamwork lets young girls know that they can accomplish anything when they put aside their personal differences and focus on the gross tentacled things that keep attacking them all the time. 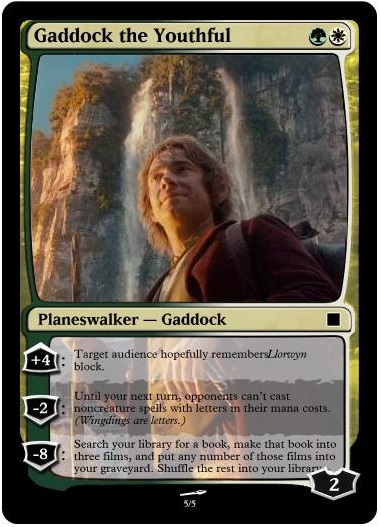 In his youth, Gaddock Teeg discovered a magic ankle bracelet in an old cave that granted him the power of the planeswalker spark. He joined the Concern-Trollers to use his newfound powers for good (he was also incidentally concerned about trolls), but his ankle bracelet holds a dark secret: It’s actually a broken piece of the chain veil, and it’s slowly corrupting his soul! Will he discover the truth in time, or will he kill everyone in their sleep one night? 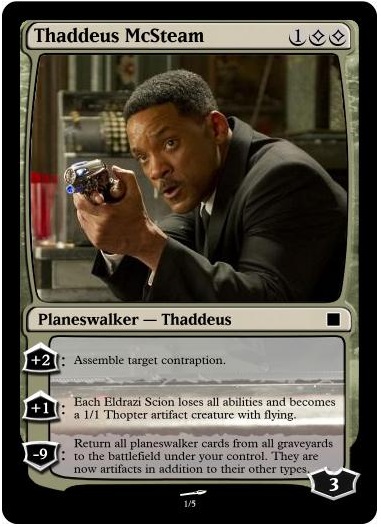 If you still haven’t gotten enough terrible parasitic planeswalkers, check out Thaddeus McSteam! He’s obviously better if you’re playing a lot of contraptions and planeswalkers, but you can still activate his +1 ability with no targets. He came to Zendikar from the technologically advanced plane of Kaladesh to defeat the Eldrazi using artificially-enhanced colorless-mana-powered gadgets. In fact, much of his practical know-how actually came from extraplanar beings very similar to the Eldrazi themselves! He knows all the weaknesses of their physiology, and the group is happy to have him along, even though he seems to have his own ulterior motives. With his help, they just might save Zendikar yet.

Jesse K: Wow, those were Intellectual-prope-terrific! If anything, seeing this whole spate of new planeswalkers makes me even more excited to see what happens with MCU (Magic Combined Universe) next. Will we see a team of badguy planeswalkers rise to challenge The Gatewatch? Will they add a new member every set to spice things up? Or maybe a West Coast Gatewatch. Only the Wizards creative department knows, so god help us all.

Jesse T: We hope you enjoyed our planeswalker superteams! If you didn’t you can always make your own. It’s pretty easy. I used Magic Workstation. Jesse K used Magic Card Maker. There’s plenty of great software out there. Have fun, and be creative! They can’t come out any worse than the ones Wizards of the Coast print.

Two Jesses
Jesse K (IAnonymous on MTGO) is a Bay Area, California wizard who's been playing and complaining about Magic: the Gathering since 1995. In his free time he enjoys building Commander decks that he rarely gets to play, gardening, and bird watching. Jesse T is an improviser, educator, and level 30 flavor judge. When he's not crusading for justice in the streets of Boston, he can be found on MTGO as gob of spit.