Most of the banned and restricted changes in recent years have been underwhelming, to put it mildly. Magic development rarely makes the sort of radical and obvious mistakes of years past, as in the Urza’s Saga era, which required mass restrictions and/or bans. But while Khans of Tarkir doesn’t contain anything like the brokenness of Tolarian Academy or Yawgmoth’s Will, it now bears the distinction of being the most recent set since Saga to have two cards on the restricted list (Mirrodin got one restricted and one unrestricted with this update, so it has had two restricted at some point). A several-year-long era mostly defined by safe unbannings has come to a screeching halt in 2015.

Dig Through Time is now restricted in Vintage and banned in Legacy.

The impact in Vintage is not likely to be very high. The card is very powerful there, but blue decks running the spell commonly played only 1 or 2 copies. In many aggro/control lists, the restriction will only require replacing a single Dig with, let’s say, the 4th copy of Preordain or Gush. Not precisely the same, true, but not a huge downgrade.

Of the 5 blue decks running the spell in the Top 8 of Vintage Champs this year, two decks did run three copies each. Ryan Eberhart’s Delver list would play similarly with other draw spells in place of Dig, but John Grudzina’s Jeskai control list seems to lean much heavier on Dig.

With singletons such as Moat and Supreme Verdict, it is likely that Dig acted more as a virtual tutor than merely a draw engine in such a list. Grudzina’s list already plays the full set of Dack Fayden as his primary draw engine, so it’s not immediately apparent what he would use to replace Dig – he was running only 3 Preordain, but contrary to the assumptions of 2011’s many Caw Blade pilots, Preordain is not actually Demonic Tutor.

The stated rationale of the DCI is that Dig was pushing out other draw spells that would otherwise see play. In terms of draw power and card selection, the historical analogues of Dig are not cantrips, but rather big spells like Fact or Fiction and Gifts Ungiven. Neither of those spells has seen much success in the era following the printing of Jace, the Mind Sculptor, with the powerful ‘walker having largely replaced those as the best big blue draw spell. With Jace being played in his lowest numbers since 2010, under the pressure of Delvers and token swarms and an uncommonly large number of opposing Lightning Bolts, could some of the other big blue draw spells make a return to supplement Dig? The DCI seems to hope so.

In Legacy, I think the dominance of Miracles in the online metagame suggested something could be banned there – but of course, my choice was and remains Brainstorm, as I explained at length in Eternal Warrior #44. Dig was used in numerous blue decks from Miracles to Delver to Shardless BUG, and was beginning to offer interesting developments to the format – in particular, the adoption of Jace, Vryn’s Prodigy. Baby Jace is quite strong in Modern Grixis, and was beginning to gain acceptance in Legacy thanks in part to his ability to fuel delve spells. Of course, Baby Jace might survive and continue to see play, as evidenced by 3 copies being in the Top 8 of a post-banning SCG Open. But personally, I was content to see Dig play itself out for a bit longer and see what else it brought to the metagame.

As a side effect, could Dark Confidant take advantage of the absence of Dig and Treasure Cruise to make a triumphant return? He seemed to be on the downswing even before the delve spells ran wild all over the format. Being domed for 8+ life was certainly reason enough to cut Bob, given the amount of damage the red-based Delver decks can throw at you in short order. But his inherent weaknesses remain. He was never great against Delver, is weak to miracles, and too slow against Elves. My bet is that Bob remains mostly on the sidelines, but that some players will give him another shot in BUG. 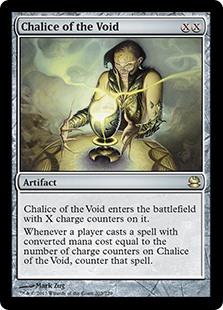 This one was certainly a head-scratcher, and the DCI explanation didn’t shed much light on the subject. The stated reason to restrict Chalice of the Void was that Workshop decks have become “more popular” recently (if you define recently as “since Lodestone Golem was printed,” maybe this is true) and that Chalice was preventing people from playing Moxen. As Stephen Menendian pointed out on his podcast, if “playing” reads as “casting”, I suppose that’s literally true. But it certainly didn’t prevent people from including them in decks where appropriate. Fish-style decks, from actual Merfolk to contemporary Delver decks, have rarely if ever played off-color Moxen, and that has nothing to do with Chalice. Finally, the DCI noted that the point of Vintage was to be able to play cards like Moxen. Nobody who owned Moxen was replacing them with Elvish Spirit Guide to dodge Chalice. The idea that the format is designed as a place for Moxen is true if you mean “include them in decks,” but taken to the extreme this would suggest that perhaps Stony Silence should be on the watch list!

The inherent tension of Workshop Stax, similar to the Legacy Chalice Stompy decks I’ve often played in this column, is that you can dump a lot of lock pieces on the table and still lose because you have no draw engine or tutoring. Your opponent has plenty of time to draw out of it if you don’t put any pressure on the board. That’s why Lodestone Golem, in stapling a 4-turn clock to a tax effect, is the most important card in Workshops. If they wanted to reduce the tendency of Workshops to effectively win on Turn 1 on the play, preventing the opponent from playing Magic, Golem would have been the most obvious target.

But this restriction does make sense if you view the DCI as wanting to preserve Workshops as a pillar of the format. Restricting Golem might have weakened Shops a bit too much. One of the best ways to dig out from under a Golem is to dump a bunch of Moxen on the table, and a Chalice set to zero was a free and easy way for the Shops player to prevent that. If you’ve decided that Golem is going to stay unrestricted, restricting Chalice is a nice measure to moderate Shops’ power.

Will this restriction have much impact? So far, MTGO Vintage Daily Events have been dominated by Shops decks since the restriction. The Hangarback Walker aggro variant of Shops, which burst onto the scene at Vintage Champs, didn’t rely much on Chalice. Those decks are including the singleton copy, probably to set at 2 against Oath of Druids. Those decks will likely rely more heavily on Grafdigger’s Cage and Witchbane Orb, and Cage in particular is a cheap artifact to feed your Arcbound Ravager and thus was already an easy inclusion in that style of deck. Of the Hangerback Shops decks that placed in Vintage Champs, Rich Shay’s is the most impacted as it included 4 Chalices and no Cages. Brian Demars’ version should be the most stable moving forward, as it included only 2 Chalices and a full set of Cages in the sideboard.

Thus far, at least online, it appears Shops is continuing to succeed after the Chalice restriction, in both the traditional Stax form and the new Aggro form that we were familiar with from the days of Classic. 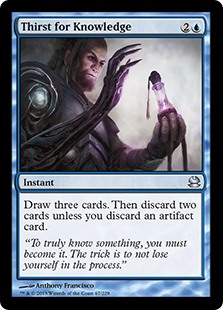 I’m quite happy with the decision to unrestrict Thirst for Knowledge. I believe the unrestriction is perfectly safe, and will have either minimal impact or the positive impact of reviving a category of decks that had been in decline in recent years.

This powerful draw spell has obvious synergies with Goblin Welder, but is Thirst for Knowledge still the best choice for those decks in light of Dack Fayden’s greater utility? Or is it a complement to Dack?

The classic home for Thirst was alongside Welders in Control Slaver decks. Brian Demars’ 2008 Vintage Champs Slaver list included 4 Strategic Planning alongside the set of Thirsts, so it’s not unreasonable to suppose a set of Thirsts and a set of Dacks might be crammed into a single deck – though that deck might now want to play Cruise and Dig as well, so the slots may no longer be there for that many such effects. But Control Slaver is long gone. The era of 4x Mana Drain decks with pricey draw spells has mostly passed. Those decks certainly have vulnerabilities to Delver’s cheaper countermagic and draw spells, so the current metagame is not particularly welcoming to Big Blue.

Other homes for Thirst before the 2009 restriction included Painted Stone — famously played by Owen Turtenwald in a memorable Vintage Champs performance — and Tezzerator, an all-in Vault-Key combo deck that has fallen out of favor in recent years. MTGO players seem to have taken Thirst’s unrestriction as a challenge to resurrect those archetypes, and we actually have a couple of new lists to use as starting points:

Both of these decks look fun to play, and it’s exciting that the Thirst unrestriction may have helped revive them.

I was excited about trying these out, so I blew 20 tix on a Mox Opal and took some time to test out the Tezzerator list. I’ll have more to say about it in detail during my next article, as some of the card choices are very interesting, particularly in the sideboard. My initial impression after a night of matches is that I would be needing to win with Yawgmoth’s Will a fair bit of the time. Not having played much with that card since the days of Classic, I was making too many silly mistakes with it early on, and I will need to re-adjust to the sort of calculations required to take the correct line of play with it.

My original intention for this week was to have matchplay video of the deck ready to go, but because of a death in the family I had to try cramming testing and recording into a single night and ran up against the Saturday night Daily Event occupying all the Vintage players. By my next article, I should have matchplay video of one of these Thirst decks ready to share with you.