In this tutorial piece, I cover a very fundamental topic in Magic: Mana bases and land counts. Mana is the currency of our favorite card game. If you are interested in casting spells and winning the game, it’s essential to have an adequate amount of mana at every point. Of course, there are some rules of thumb how many mana-producing lands you should play (namely, 17 for limited, or 24 for constructed), but these are just very rudimentary guidelines.

For instance, I had the feeling I struggle to find mana sources too often when playing 17 lands in limited, so I wanted to know the hard facts. Checking Google, I found a number of articles and discussions on this topic, but none of them provided adequate numbers and probabilities.

In this and the following piece, I will illuminate the topic of a proper mana base from different angles. In each, I will define a potential problem concerning the number and distribution of mana-producing lands in your limited deck. After clarifying which aspect I want to discuss, simulation-based results will help us make the right choice to avoid the aforementioned kind of mana problems.

In Magic you want to be able to cast your spells. Not having enough available mana is the easiest way to fail in this. And it is perhaps the most depressing way to lose a game of Magic. Of course, there is an easy way to avoid this problem: Just put more lands into your deck.

On the other hand, doing so might lead to another problem. Having just mana sources and no spells isn’t much of an improvement. So where is the right balance?

To answer this question using statistics, I have to define the issues more precisely. What about this formulation?:

1. A limited deck plays enough lands if you are consistently able to play one land each turn for up to k turns, where k depends on your strategy, the speed of the format, etc. (In M14 I am usually happy if I am able to play a land every turn up to Turns 4, 5, or even 6, so my k-value for this analysis will be somewhere between 4 and 6. You will have to adjust this for your kind of deck, your strategy, the set you are playing, etc.)

2. A limited deck plays too many lands if it regularly gives you j or more lands in the starting-hand and/or if you are able to play one land each turn for up to i turns.

Again, j and i depend on the format, your strategy, etc.

Usually we would not like to start with 5 or more lands in our opening hand. So I’ve determined that, for our present situation, j is equal to 5.

While I like to play 5 or 6 lands in a row in M14, I would like to avoid playing more than that without missing at least one land-drop. This is because in a typical game, I empty my hand by Turn 6 and would like to draw more spells most of the time from then on. So I set my i-value to 7. (This value would be different if I were playing a different strategy, such as a deck that ran four Garruk’s Hordes. Then I would probably want to consistently play seven lands without missing a land drop.)

I performed simulations for decks with 15 to 22 lands per 40 cards total. Each simulation used 1,000,000 games of Magic. For each game, it was counted how many lands we could play in a row without missing a land drop. The results are summarized in the following graph: 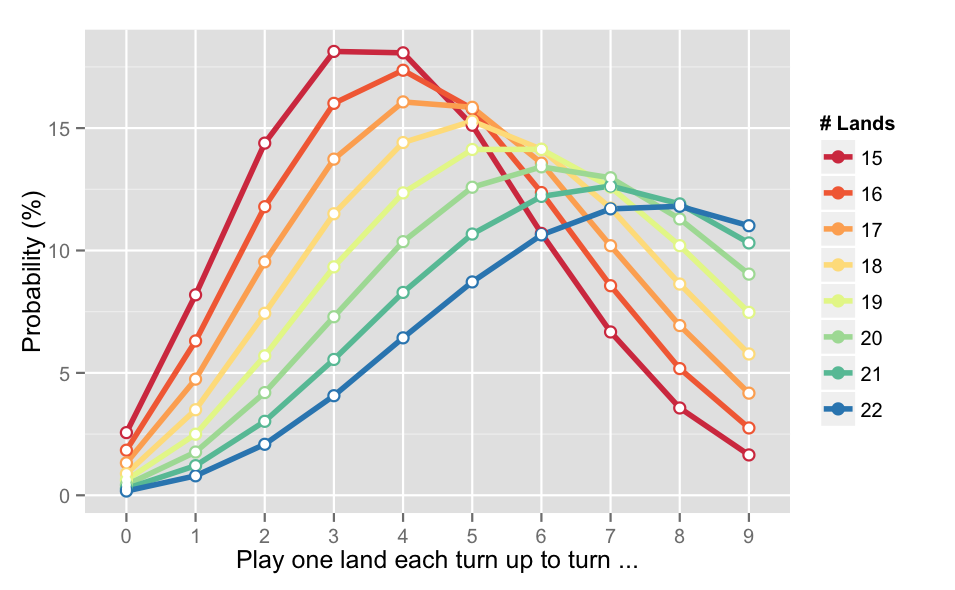 Each line represents the probability of hitting a number x land drops in a row when playing the given number of lands in a 40-card deck:

The red line represents the probabilities of being able to play 0, 1, 2, 3, etc., lands in a row without missing a land drop playing 15 lands in a 40-card deck.

The first red bullet is the probability of having a no-land starting hand in a 15-land 40-card deck (we are on the play in this simulation all the time, and we have not mulled it), which is 2.6%.

The second red bullet is the probability of having one land in the starting hand and not drawing a second one by Turn 2. The probability is 8.2%. 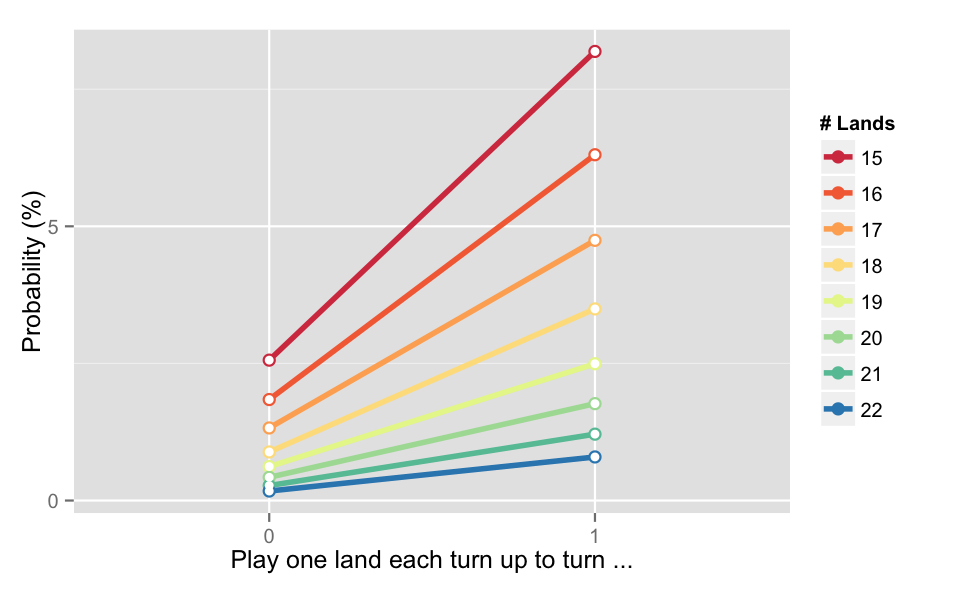 Overall I think the upper graphs give a bit too much information. Let me provide some simplified scenarios. In a M14-draft I am usually:

So let us summarize the probabilities for the different scenarios depending on the number of lands played. 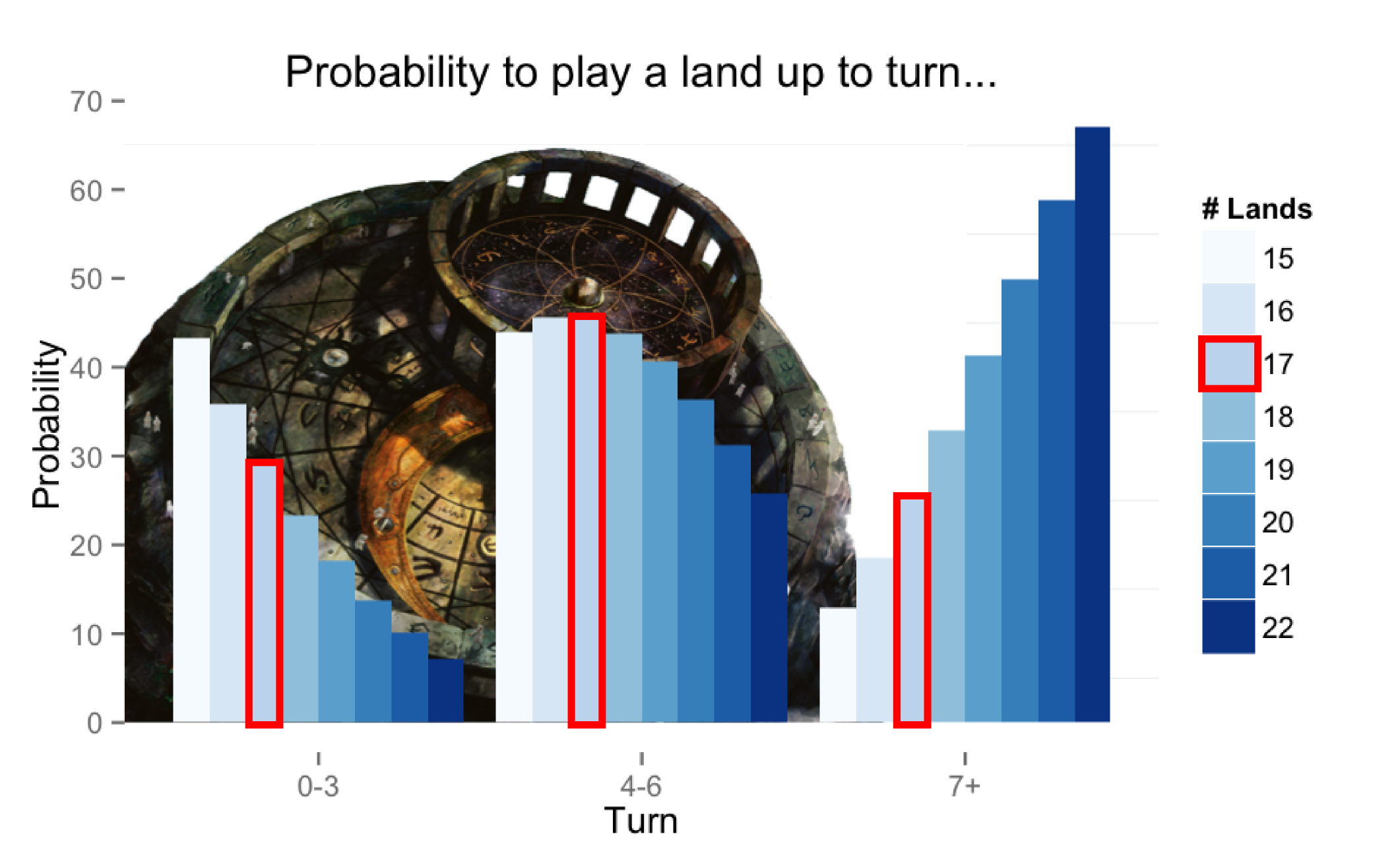 Here each bar represents the probability for one of the above scenarios when using a 40-card-deck with the given number of lands.

Not surprisingly the known recommendation of 17 lands seems to be one of the best solutions. The probability of not having at least 4 lands by Turn 4 is relatively low: 29%. The probability of the preferred scenario is the largest of all the analyzed decks (15 to 22 lands): nearly 46%. At the same time the probability for too many lands is reasonably low at around 25%. (Note, of course, that this presumes you haven’t cast any card draw spells or cantrips.)

In my opinion, the comparison of the 17-land deck with the 18-land deck is of special interest.

I already mentioned that the number of lands in your starting hand is of special interest because opening hands are the only information source you have to decide whether to mulligan. (For example, your opening hand may contain 6 lands, suggesting a mulligan, even though the next six cards are all on-curve spells. This means that some cases in which your first six turns would fall in the “Just right” scenario above could prompt a mulligan, rendering the opening hand even more important to consider.) The decision to mulligan is rarely easy. My approach is to avoid the mulligan as much as possible by minimizing the number of starting hands with too many or too few lands.

To evaluate this, we don’t need simulated results, as the probabilities can easily be calculated. (See Hypergeometric distribution on Wikipedia.)

All probabilities are rounded.

Of course, there are always additional factors to consider. For instance, running a number of cantrips or card draw effectively reduces the size of your deck, changing the math. But this will often not be very helpful in your opening hand, when you must make a decision about whether to mulligan before seeing what cards you will cantrip into.

Especially in a slow format like M14, when in doubt, I prefer to have too many lands over missing lands. This is why I play 18 lands all the time in M14. Decreasing the probability for the “not-enough-land” scenario by 6% seems to be good enough for me to accept that I might have too many lands from time to time; in fact, these chances are increased by about only 8%.

Avoiding one kind of mana problem in 6 of 100 games might sound marginal. But are there many 23rd cards that increase the chance to win a game by that much? I don’t think so.

My next article, “The Right Ratio,” will follow a similar approach to find the right ratio of lands in two-color decks. Like this one, it will not revolutionize the way we play Magic, but it will provide some explanation about why we do it the way we do it, when we do it well.