In the last piece of Expected Results, I presented a mathematical way to approach the desired number of lands for a Magic limited deck. That article focused on the number of lands only, without respect to varying combinations of different basic land types for multicolor decks.

Today I will discuss this second aspect of a mana base. In the first section I present a way to evaluate the quality of a multicolor mana base. The second section presents a web application that allows you to analyze any deck using the previously discussed approach.

Let me quickly explain my consideration about the right distribution of basic lands using a couple of my latest draft decks as examples. 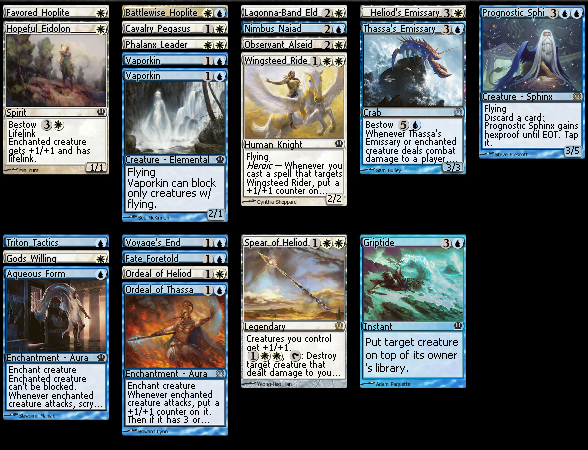 My first consideration is the number of cards in each color in the deck. In this example the distribution of blue and white cards is even (11 white, 11 blue and 1 blue-white card). My conclusion is that the number of islands should be more or less the same as the number of plains. Of course that’s not possible, when playing 17 lands.

Should I prefer 9 islands and 8 plains over 8 islands and 9 plains? To answer this question, I have to focus on the cheap cards. The expensive cards shouldn’t be a problem because it is very unlikely to be unable to cast an expensive card due to color problems at the time you have enough mana for it as long as your mana base is reasonable. E.g., it should not be a problem to cast Prognostic Sphinx when I have 5 mana available. 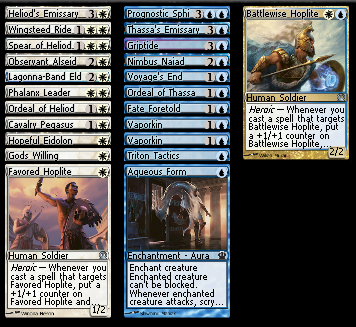 In this kind of deck, my win-strategy is to cast early creatures and ordeals. So I have to make sure that I am able to cast cards like Phalanx Leader, Battlewise Hoplite, or Wingsteed Rider as soon as possible. Other cheap cards like Aqueous Form or Gods Willing are typically not early-game plays, so they are less important for my mana base planning.

Finally I decide to play 9 plains and 8 islands, because of the double mana symbols in important cards such as Wingsteed Rider and Spear of Heliod.

Let’s go through another example: 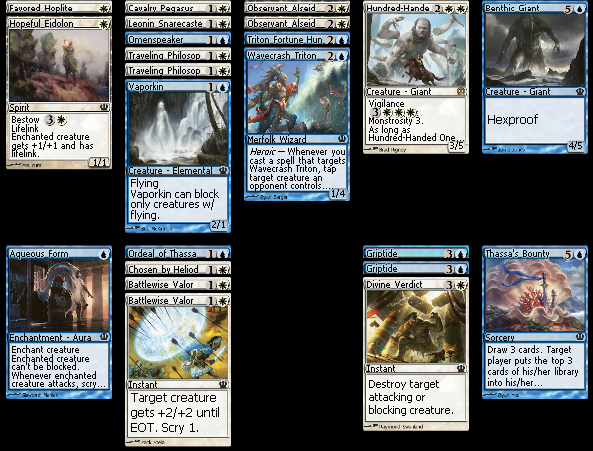 Clearly this is a less focused, weaker deck. 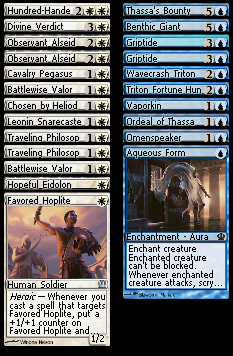 It plays more white (13) than blue (10) cards. The early game is stamped by the white cards, while most of the blue cards are late-game cards. My conclusion: Play 10 plains and 7 islands.

Here I was very short on playables and had to add a black splash to the deck. Especially without any mana fixing, this will be a interesting mana base. 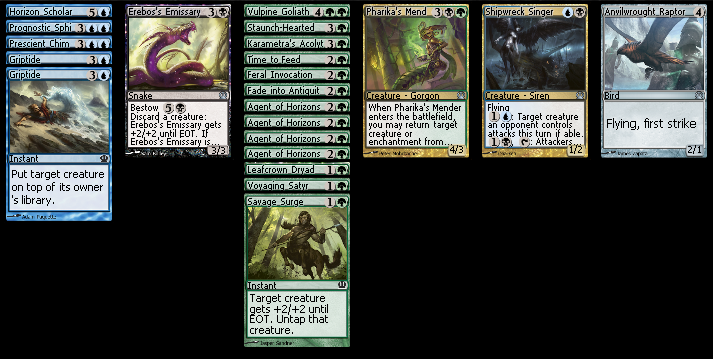 There are 6 blue cards (including Shipwreck Singer), 3 black cards, and 14 green cards. Additionally we have to consider that the 4 Agent of Horizons are most useful with blue mana.

Take a moment to think that through. What number of swamps, forests, and islands would you play?

Optimality of a Mana Base

Let me summarize what I usually think about when trying to find the right mana base:

Now my intention was to find a mathematical way to put most of these questions into one number. I wanted to calculate a statistic that answer to the question “How good is a chosen mana base for a specific deck?” Therefore I answer the following question for every single card x in my deck:

Assuming card x is in my starting hand, for a given mana base, what is the probability to cast card x as soon as possible?

Take my first example. I want to answer the following questions:

The resulting score measures how good a land-distribution is for a given deck. If the score is close to 100, then we have a very good chance to play any card in my deck as soon as possible. The smaller the number is, the less likely it is to be able to cast the right spells early.

Doing this for all possible combinations of basic lands, I am able to measure this quality for all of them. Just choose the one with the largest score.

Too complicated to do this on the fly?

Of course it’s a lot of work to go through this every time you do a draft. I needed a fast way to go through this. So I wrote a small web application which is doing the math for me. Let me show you how to use it:

The first step is to save your decklist as a .csv file. This can be done by changing to the list view in Magic Online. Select all the cards in your deck and right-click somewhere on the selection. You will see in the context menu an entry to “export to .csv”. Save the file somewhere on your machine. You will need it in the next step.

As a second step, follow this link and upload your deck list using the “Upload” button. The application will do the math and display the best 3 land distributions for your deck.

The second part of “All Land Combinations” gives an overview of all the other possible basic land combinations.

For most decks I tried, the web-app and thus my optimality criteria, produced very reasonable recommendations. Here are the results for the three discussed examples:

The top 3 recommendations are usually very close to each other in terms of my score. Here I played the 3rd best solution for each example because the statistic does not covering everything I want to take care of when planning my mana base.

Thus, be careful with how you interpret the results. The application does not know Magic. It is just crunching some numbers. In my first example, the app is calculating the probability of casting Gods Willing on Turn 1, which is not a reasonable play at all. The application is not able to replace thinking. But it might give you a good starting point for your evaluation.

Furthermore the app does not incorporate any mana fixers into its logic. So if you have any Traveler’s Amulets in your deck, the app is going to ignore it for the moment. The same applies for all lands producing more than one kind of mana (e.g., the scry lands).

I still have some more ideas to improve the app, which might result in some changes in the near future (e.g., support other sets than only Theros, allowing the user to add a weight for each card — so that, for example, one can manually decrease the importance of playing Gods Willing on Turn 1).

But in the meantime: If you like the idea, give it a shot! Try the app and send me some feedback (bugs, feature requests, etc.)!