So the Khans of Tarkir release events finally came to an end. Card prices should start to go down now, so it is time for us to see what we can build on a $20 budget here.

Tarkir is a plane with 5 clans that battle for control. They all represent an aspect of the dragon. Those flying lizards have long gone from the plane and Sarkhan, the Dragonspeaker is around to find them. Also around is Sorin, Solemn Visitor who left his home plane Innistrad for a quest with an unknown purpose.

The clans of Tarkir are based on “wedges”. Have a look at the Magic color wheel, which was originally from this article on Wizards’ website: 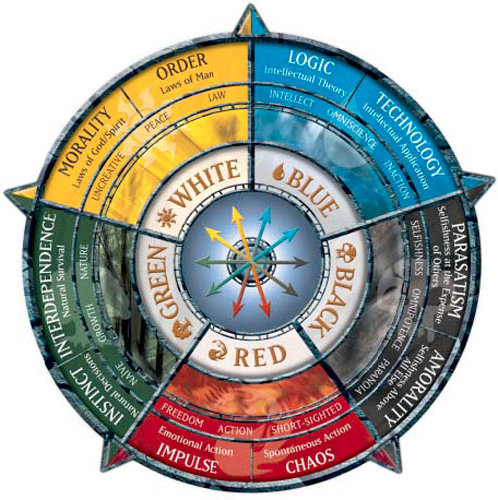 A color in Magic is allied with its two neighbors. It is enemy to the two opposite colors. Wedges are clusters formed by two allied colors and their common enemy color. For example white, blue, and red. Or red, green, and blue. The five clans on Tarkir are as follows:

● The Mardu Horde (Red/White/Black) views speed as the greatest aspect, and use the wings to represent that. They are led by Zurgo Helmsmasher.

● The Jeskai Way (Blue/Red/White) prefer the cunning nature of the dragon, and represent themselves with the eye. They are led by Narset.

● The Temur Frontier (Green/Blue/Red) believe in the dragon’s savagery, and use the claws as their symbol. They are led by Surrak Dragonclaw.

● The Sultai Brood (Black/Green/Blue) make themselves ruthless like the dragon, and see the fang as its most ruthless part. They are led by Sidisi.

● The Abzan Houses (White/Black/Green) see endurance as the most important quality of the dragon, and use the scales to show that. They are led by Anafenza.

Each clan got its own intro pack, so we now have to choose which one to take. In the previous episodes I featured all colors except black. So I want a black deck this time. This leaves us with either the Mardu, the Sultai, or the Abzan. Abzan is W/B/G and we just finished a G/W deck. So the decision is to be made between the Mardu and the Sultai. I think the Sultai got the more interesting clan mechanic but the Mardu are led by Zurgo Helmsmasher, who seems to be a very likeable guy. I also think that a pure aggressive deck like the Mardu are easier to build on a budget than an equally strong Sultai deck. So we go with the Mardu Horde.

So let’s open the Mardu Raiders intro deck and look what’s in there!

Okay, that’s a ton of cards. And most of them are single copies. Great. Wizards usually uses these decks to show off their set and give new players as many cards to have fun with as possible. That this isn’t a terribly efficient approach doesn’t seem to matter. As usual you can get this deck for $15 at the MTGO store or for about 2 tickets at the Academy_Sellbots.

So let us analyze this heap of cards, shall we?

The first major theme of the deck holds true to the Mardu doctrine of speed. It sports a ton of cheap, aggressive creatures that you can play and send to the red zone. The most expensive cards cost 5 mana. The color distribution of the creatures is relatively evenly spread over white, red, and black. Some, but not all, creatures sport the Mardu clan mechanic Raid. Raid rewards you for an aggressive play style. If you play a card with raid after having attacked this turn, the card has additional effects. That forces you to throw creatures at your opponent instead of hiding behind walls. I think the power level of the creatures is very meh. The best creature might even be Valley Dasher as a 2/2 with haste. That tells you something about the rest of his comrades. Even the rare Ankle Shanker is quite underwhelming. It gives your creatures first strike and death touch. That means your opponent won’t want to block them, since she would lose her creatures in the trade. But the Shanker costs 5 mana and is only a 2/2. If the creatures you played up to Turn 5 are already removed by Anger of the Gods, then Ankle Shanker is the worst 5-drop you could possibly play.

The second major theme of the deck is removal. Since we need to attack with our creatures in order to activate the raid ability and to ultimately win the game, the deck needs some way to clear the opponent’s blockers. It found one in the form of damage and kill spells like Lightning Strike and Flesh to Dust. That’s good since it kills two goblins with the same stone. Firstly we get our creatures into our opponent’s face where they can hit her life total. And secondly we get rid of potentially dangerous creatures that can win the game for our opponent. But one problem I see here is the lack of spells that can do 4 points of damage. That means Courser of Kruphix will stand his ground as a blocker. But since the raid mechanic works better than bloodthirst from the Ravnica block and fairly recent core set, we don’t have to actually hurt our opponent. We can attack, get blocked by the Courser, and then remove it via Lightning Strike. Raid will still activate and net us a nice effect.

One minor theme of the deck is tokens. Raise the Alarm and Hordeling Outburst create a bunch of 1/1 tokens. If you read the last part of this series, you’ll know that we created half a token deck at that time. While it was pretty good back then, I am not sure about its usefulness in the kind of deck that is Mardu Raiders. But we’ll see.

Another minor theme of the deck is mana fixing. With a 3-color deck you want to make sure that you can actually cast your spells. Mardu Raiders tries to achieve this through a variety of lands and Mardu Banner. It includes one copy of every life gaining land that provides mana in two of the needed colors. It also includes Nomad Outpost the three-color-mana uncommon land for Mardu. Nevertheless, I am skeptical about the life gain lands and not totally sure that the mana base is stable.

So what is my overall impression? I think the deck sticks to its theme of aggressiveness. All cards are working toward this goal in one way or another. That is quite unique for a Wizards deck, since they normally throw in a couple of cards that behave just weird. The trade off seems to be that we don’t get more than 2 copies of any single card which gives the impression of a commander deck. The overall power level of the cards is mediocre at best. I expect the deck in its current state to run out of steam before the opponent is reduced to 0 life points. We probably have to change the creature base somewhat in order to replace our current zoo with a couple of highly efficient beaters. So what are the best and what are the worst cards in the deck?

In a heap of averageness, it’s hard to identify the best cards. Let’s try it anyway.

Valley Dasher: As stated above, this card is pretty good. It is a 2/2 for 2 mana with haste. That it has to attack every turn is pretty negligible since we want to do that anyway. So hooray for a 2/2 common to be the best card in the deck.

Ankle Shanker: This is the signature rare of the deck. As written above, it has its drawbacks when you play him onto a clean board. But if you have three or four creatures on the board on turn 5 or 6 and your opponent started to play creatures that are bigger than yours, then this little fellow can turn the tide to your favor.

Nomad Outpost: Yes, this pick is born out of despair. But as far as mana generation goes, this land is pretty solid. It generates every type of mana we need and the only drawback is that it comes into play tapped. This may actually be a huge drawback since we want to play our creatures on every turn. But with our budget we do not have access to the fetch lands of Khans of Tarkir or the dual lands of Magic 2015. So Nomad Outpost is our land of choice. We can probably build around its drawback by not playing any creatures with conerted mana costs of 1.

Surprisingly, it was much easier to identify the worst cards in the deck than it was to name the best cards.

Gurmag Swiftwing/Mardu Hateblade: Any creature whose sole purpose it is to attack is pretty bad if it has only 1 power. It would take 20 turns to reduce your opponent’s life to 0. A creature with a mere power of 2 is already twice as good. Even additional effects like haste, first strike, or deathtouch are not good enough to make up for the lack of power. The Hateblade is much like Typhoid Rats. It has a certain appeal because “look, it can kill all your creatures!” But your opponent can basically ignore your 1/1 creature because it deals so little damage. In this deck these creatures are slightly less bad because they can trigger raid. But they are still some of the worst cards in the deck.

Mardu Banner: Mana fixing is always nice. There is nothing more frustrating than to lose a game because you were not able to cast a spell you needed to. This said, an artifact for 3 mana is a pretty bad way to generate your mana. You won’t be able to play anything else on Turn 3 if you play the banner. The banner doesn’t affect the board at all so you are basically wasting a turn that you could have used to play something good like Goblin Roughrider. That you can sacrifice it to get another card doesn’t make it better. You could get this effect from Dragon Mantle which costs 1 mana and nets you an enchantment on the board.

The cycle of life gain lands: As Mardu Banner above, these cards are here for mana fixing. But in opposition to Nomad Outpost, they only provide two types of mana. They also come into play tapped which is bad in an aggressive deck. That you gain 1 life when they come into play is a miniscule effect that we do not want in our deck. We do not want to outlast our opponent but to beat them down as quickly as possible. A 2-color land with life gain is just not enough to justify it to come into play tapped. I’d rather have a Nomad Outpost or even a Temple of Malice that got pretty cheap in the last weeks.

I think if you play this deck against another intro deck, it stands a high chance of winning. You can simply bring threat after threat onto the board and overwhelm your opponent with creatures and burn spells. Against a better constructed deck it will probably struggle due to the low threat nature of most of its creatures. It looks more like a well-made limited deck than a constructed winner to me. Luckily, there are a lot of good Mardu creatures out there that will fit right into our budget. So I am looking forward to bringing this deck to the tables and improving it in the process!

What do you think? Is the Mardu clan to your liking? Will the deck work out at the tables? Is the mana base stable? Feel free to comment or write me at MTGO under the screenname Gurkengelee.