In this tutorial we will examine one of the most popular Magic: The Gathering formats – Drafting. You will learn how the format works, what you have to take into account before you jump into the tournament queues, and how to deal with various issues that can arise during drafting and the games. This piece is aimed at beginners who want to learn how the format works and how to avoid the common pitfalls. I will provide screen shots where useful and show you what the various buttons and stats mean that you will find during the drafting.

What is Booster Drafting? 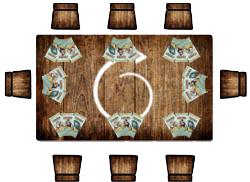 In a Booster Draft players, (usually eight) sit around a table, and each of them has three sealed Booster Packs in front of them. This boosters have to be from a specific set or block, and each player has the same boosters. Now everyone opens the first booster, flips through all the cards in the pack, picks one and only one of the cards, puts it face down in front of him, and hands the rest of the cards to the left neighbor. This means you are going to receive the leftover of your right neighbor’s booster, from which you will again pick one card to add to your pool and hand the rest to your left neighbor. This repeats until all fifteen cards have been distributed this way.

Now you open the second booster and repeat the process but you hand the cards to your right neighbor this time. The third and last pack is again handed to the left until all players have 45 cards in front of them (3x 15 cards). During live events a judge will make sure that all players stay in sync, and that no one is cheating cards into their stacks. He will also limit the time that each player may take for his choice. MTGO will do that automatically and limit the time you can take before it automatically picks a random card for you when your time runs out (without a choice from your side). Please note that you will be able to add as many basic lands as you like to the pool, so you don’t need to worry drafting them at all!

See this video for a live coverage of a top draft tournament (Pro Tour Nagoya):

When you have finished the draft portion, you will use those 45 cards in your pool to build the best possible deck, with which you will then play against the other players to determine the tournament winner. Your deck has to have a minimum size of 40 cards total, including lands but has no upper limit. Why it is still recommended to stay as close as possible to the minimum we will discuss later.

All cards you are not using in your deck become your sideboard, and you are allowed to exchange cards between your sideboard and deck between the games of a match, but you have to start each new match with your initial configuration. All cards that you have drafted will remain yours when the tournament ends, regardless of the outcome of the matches. You might, however, win additional booster packs depending on your result and the type of Booster Draft you have entered.

How does it work on MTGO? 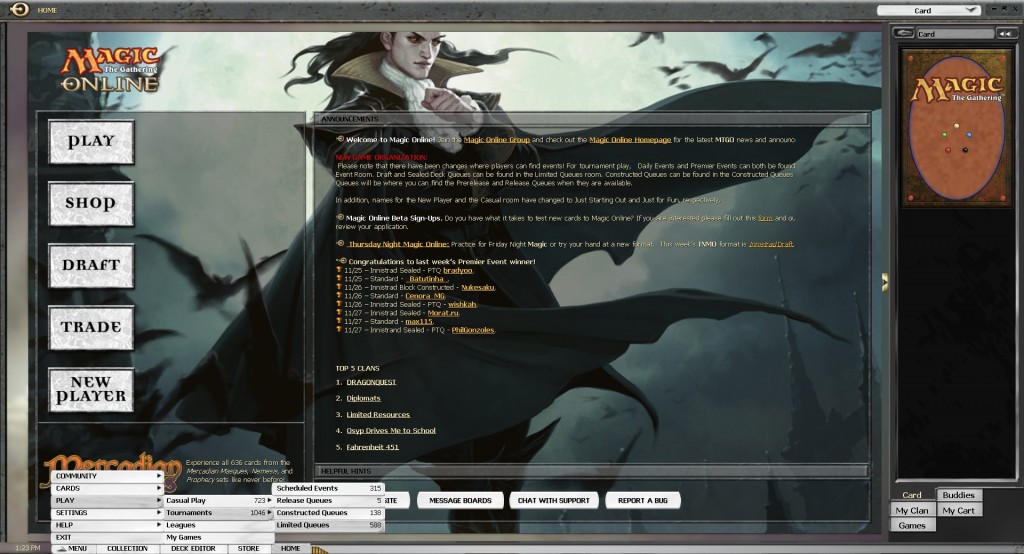 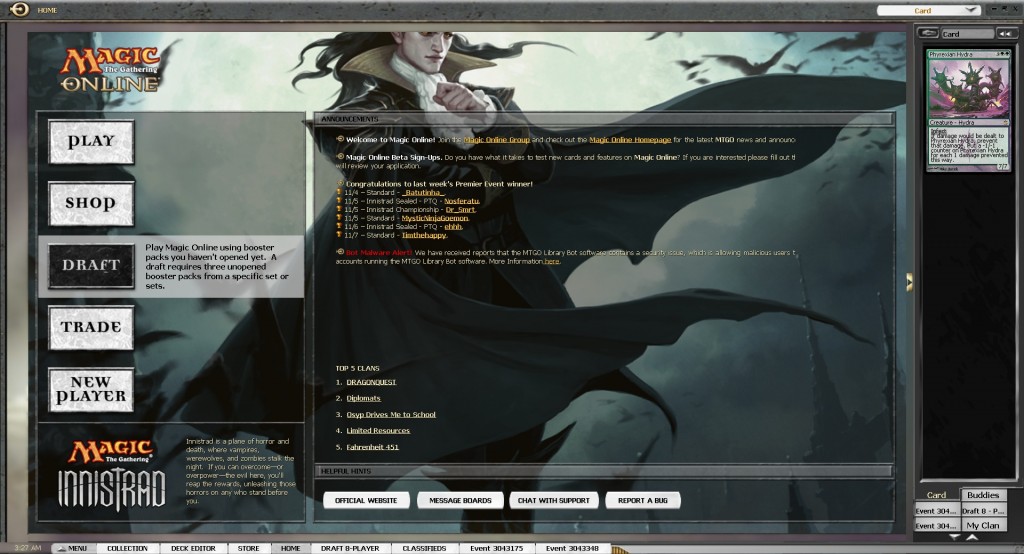 2. Description – The description will show you what sets or which block will be drafted and the type of tournament you are
entering. Depending on your skill level and risk preference you will have to choose between.

a) 8-4 Drafts: This simply means that you will have to win the first two rounds to receive a price. When you lose a match, you are out of the tournament (single elimination). The loser of the finals receives four booster packs and the winner eight booster packs; the other six players get nothing! This is great, of course, if you have drafted the set a lot and you are a very strong player, but we do not recommend this to beginners at all!

b) 4-3-2-2 Drafts: This simply means that you will have to win the first round to receive a price. The loser of the finals receives three booster packs and the winner four booster packs; the winners of the first round receive two boosters. You will find many different kinds of players in this prize structure and it is less risky but also provides a smaller reward. Usually you will want to play here if you are already well familiar with the format and feel confident in your playing ability.

c) Swiss Drafts: In a Swiss Draft you will play all three rounds regardless of whether you win or lose any round. You will get one booster pack for each of the three rounds you win, and you will get paired against an opponent who has the same win/loss ratio you have, e.g., if you have lost the first round, you will play against someone who also lost his first round. Swiss provides a maximum reward of three booster packs but gives you the opportunity to stay in the tournament regardless of the outcome of the matches. It is a great way to gain experience with a format and with new cards. This is the format we would highly recommend to beginners who feel ready to jump into competitive Limited tournaments.

d) Phantom Drafts: In a Phantom Draft you pay a much lower entry fee but do NOT keep the cards you are drafting. See information about this rather new format here.

3. Status – Is showing you if the tournament is finished, in progress, or if it is waiting for players.

4. # Players – Here you can see how many players are seated at the table. When eight players are present the tournament starts automatically and your first booster will be opened for you.

5. Speed – There are tournaments that allow less time for choosing your card. We recommend you stay with the “Regular” speed, which in most cases is the only option anyway.

6. K-Value – The “K-Value” determines how much your rating can change when playing the tournament. It is not really important precisely how it is calculated at the moment, and it is enough to know that the higher the K-Value, the more important the tournament is for determining rating changes. It shouldn’t really matter for you at this stage.

7. Time Limits – Shows you how much time you will have to build and submit your deck and how long a round will take maximally. 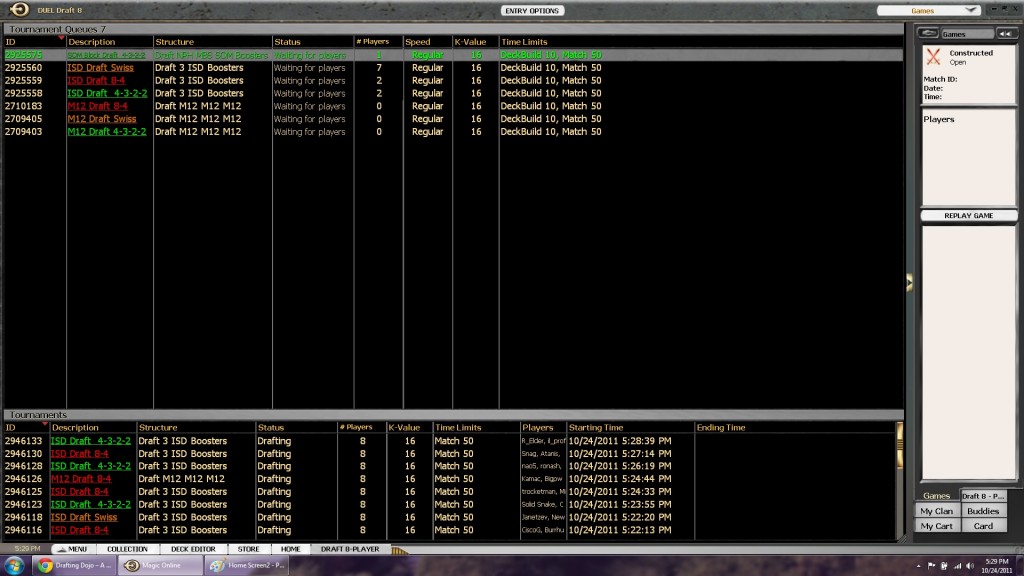 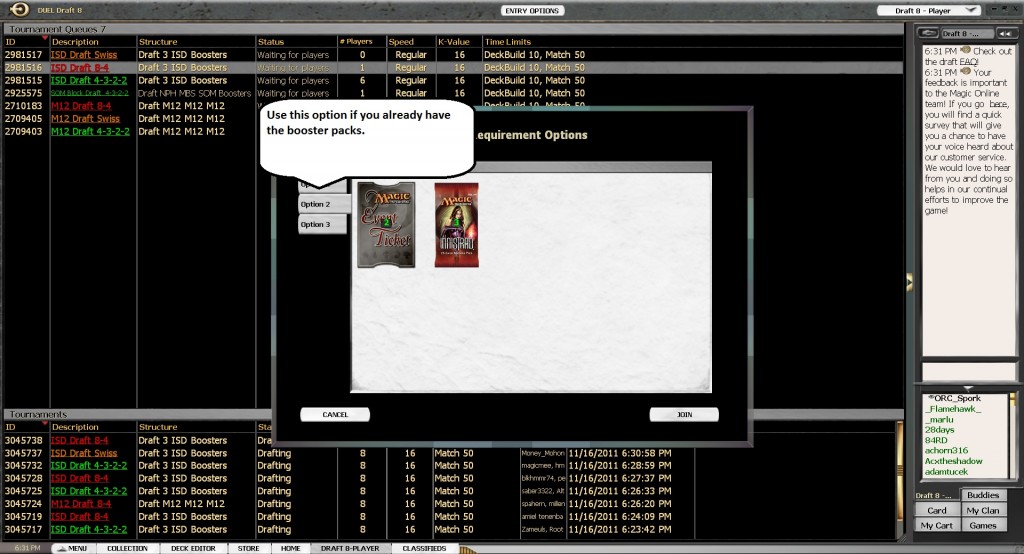 When you have entered the tournament, it will start as soon as 8 people are in the Draft. Depending on the time and the format, this can take a while or fill within seconds. Then you will see a screen like this (double click to enlarge): 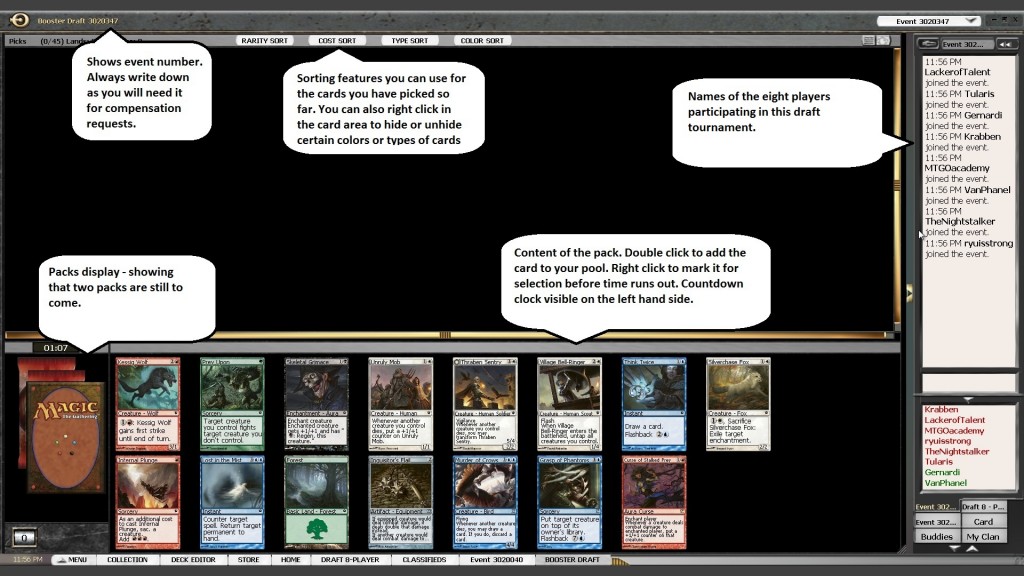 Once you have picked 45 cards and all the other players have done the same, the screen view will switch to the deck building screen. Here you can use the cards you have drafted to build a 40 card deck you will use to play out the matches versus the other players. All cards that do not end up in your deck build your sideboard and can later be used to make changes between games.

IMPORTANT: All cards you have drafted are permanently yours and you will keep them unless you participate in a “Phantom Event”. Those are far cheaper to enter but you do not keep any of the cards.

See the following picture for an overview of the deckbuilding screen: 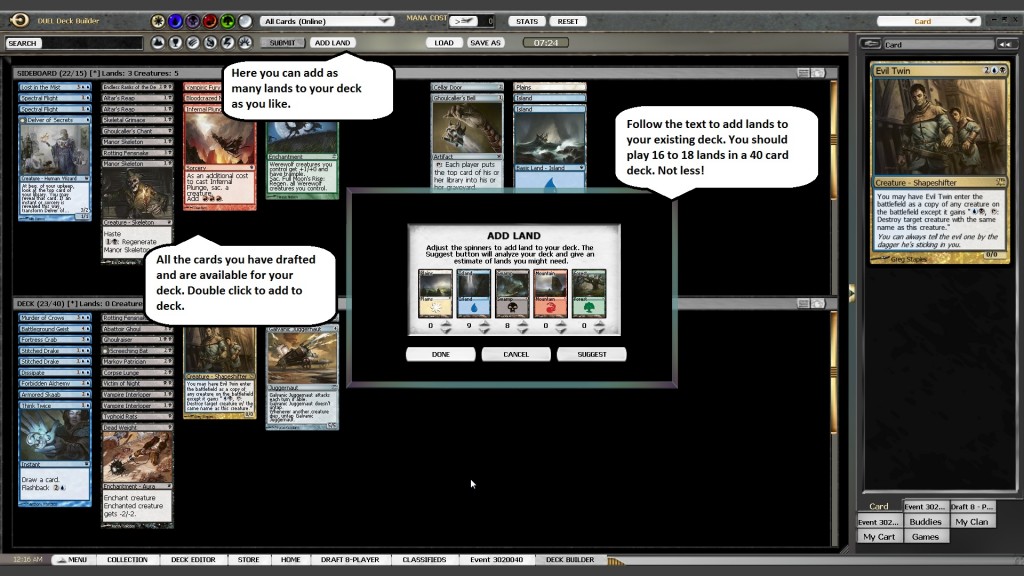 When the deckbuilding time runs out, you will be automatically matched with one of the other players in the Draft and play a best of three match. The first person that wins two games advances to the next round. You are free to change your deck between games to adapt to your opponent’s strategy if you have useful sideboard cards. When you are satisfied with the composition of your deck, click on “Submit” and wait for your opponent to do the same. If you lose a match in a 4-3-2-2 or 8-4 Draft, you are out and will have to wait until the event is completely over to receive any prizes you might have won.

If you are playing a Swiss draft you will ALWAYS play all three rounds regardless of the outcome of the previous round.

What else should I know when drafting on MTGO?

To make the experience as positive as possible for you, I have compiled a list of short tricks, advice, and general rules of thumb you can refer to moving forward. I have also collected the most valuable links for you to help you advance your knowledge as well as find resources you might want to use to increase your play skill.

Useful Resources to Expand your Knowledge

Booster Draft Simulator – Wizards of the Coast offers you the possibility to test the water with this tool without spending any money. You can simulate the draft portion of a draft and compare your choices with other players.

MTGO Academy Draft Videos – Here you will find videos of some of the best players drafting on MTGO. You will not only see what cards they pick and why but also follow them along during the games.

MTGO Academy Play Interface Tutorial – If you still feel unsure about the play interface, check out this short video that explains how to use the game interface during gameplay.