Welcome back to Premade to Awesome! Two weeks ago we fleshed out the Mardu Raiders deck and I promised you to bring it to a Standard constructed event.

Well I did and I didn’t even get to the second round. I went against a Abzan deck full of Courser of Kruphix, Wingmate Roc Sorin, Solemn Visitor and dual lands. I, on the other hand, had a lot of lands. 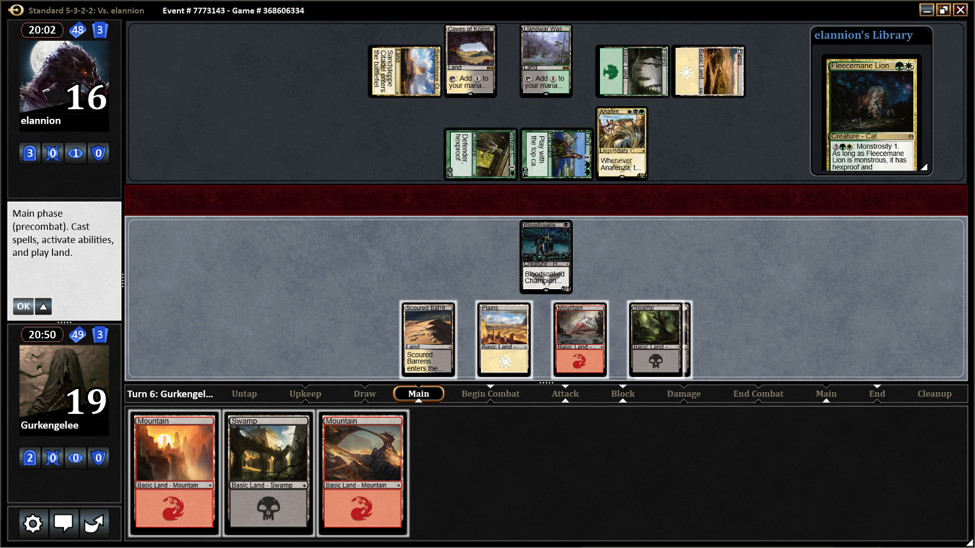 So no boosters for me.

This week it is time to open up another premade deck with another clan of Tarkir. I decided to go with the Temur this time, mainly because they feature a badass elephant on the cover but also, since with green and blue, we have two colors that were absent the last 6 to 12 weeks. So let’s open the deck called Temur Avalanche.

You can get these cards for $15 at the MTGO store or for 1 event ticket at the Academy_Sellbots. Your call.

The Temur clans fancy the dragon’s savagery. They have its claw as symbol and are led by Surrak Dragonclaw. This guy is quite a monster. Albeit being human, he is 6/6 and therefore could single-handedly kill most dragons that dare to cross his way. Oh well.

Let’s see what this deck wants us to do with it.

First we have morph. Morph is a very fun ability that dates back to the Onslaught Block where I started playing (and collected dozens of Scornful Egotists – ahem). A creature with morph can be played for 3 colorless mana as a 2/2 creature. It is placed face down onto the table and can be turned face up when you play its unique morph costs. Usually it also has a special effect when it is turned face up.

Having a lot of creatures with morph is a lot of fun. Firstly you do not run into mana problems. Come Turn 3 any three lands will allow you to at least play something. And it basically turns Magic into a game of poker. This is especially fun in paper Magic when you can see your opponent’s face while she tries to determine if you have Aven Liberator or Exalted Angel on the board.

The second major theme is ferocious. Ferocious is the Temur clan mechanic. It’s very simple. If you have a creature with power 4 or more on the battlefield, you get an extra effect. If not, you don’t. There are six spells in the deck with ferocious but Heir of the Wilds is the only creature among them. So basically it is hit or miss. If we have to cast one of our instants or sorceries and we have a 4-power creature on the board we are lucky. If not, we lose a lot of power from that specific card.

A minor theme of the deck is temporary creature buffing. With Titanic Growth, Savage Punch, and Temur Charm, we have three spells that can make our creatures bigger. This can activate ferocious if we have enough mana to play a second spell this turn.

Two of the aforementioned spells also allow our creatures to fight an opponent’s creature. This is basically the green variant of a removal spell. As a more classic removal spell there is Lightning Strike.

The last minor theme is blocking shenanigans. With Temur Charm we can prevent our opponent’s creatures from blocking, with Avalanche Tusker and Roar of Challenge we can make them block unfavorably. This is actually pretty good since it can work as another way to remove pesky creatures from the board.

Okay, so let’s make an educated guess if this deck will work or not. As opposed to Mardu Raiders, it doesn’t come as a zoo of single-copy cards. This is nice. On the other hand it looks a bit slow. I see us playing a lot of morphed 2/2 creatures and then waiting until we can turn them face up. We may need some good land draws or pump spells to get through the early phase. The lack of trample then makes it difficult to finish games, especially if the opponent is able to generate tokens with cards like Goblin Rabblemaster.

The deck also lacks a way to draw cards. On the other hand Mardu Raiders also had no way until we added Raiders’ Spoils. And that didn’t come up more than once. Nevertheless with blue mana we may want to add a generic draw spell. I also don’t like the power level of our creatures. They are obviously included to provide us with something to activate ferocious. But outside of having 4 power or more, they are not that good.

On the other hand with most creatures having morph we shouldn’t run into mana issues too often. This was a serious problem with Mardu Raiders that I did not manage to fix until the end. Therefore the deck may have a mediocre mid-game that can transition into a nice late game when we can turn our creatures face up. We will see how it works at the tables.

Traditionally we now identify the three best and the three worst cards of the deck. So here it comes.

Heir of the Wilds: Yep I think this uncommon is probably the best card in the deck. It is 2/2 for 2 mana which is okay, but it comes with deathtouch and as soon as we have a bigger buddy for him, he becomes 3/3 on the attack. Therefore he is good at all stages of the game. He is useful in getting in some early points of damage but he can also hold the line if we need more time to assemble our army. Props for the heir.

Snowhorn Rider: Currently this card is our finisher. The reason being that he is 5/5 for 5 mana (if you play him out of morph) and trample. Besides Souls and Gods he can kill nearly everything that our opponents throw at us and get out alive.

Icy Blast: I think this card can serve as a win condition. If we can activate ferocious we should be able to get two attacks in for free. This is pretty nice and should get the opponent to zero most of the times. And if worst comes to worst, Icy Blast can also be used defensively buying us two turns’ worth of time time before we face the opponents attack.

Woolly Loxodon: It is a 6/7 creature for 7 mana which is better than a Vizzerdrix (I still have one from Starter 2000). And it is an elephant which is a big upside. But it isn’t much else, and for 6 mana I expect a bigger punch than this.

Tusked Colossodon: Same story as above but it is only 6/5 for 6 and not even an elephant. Shame on you.

Temur Banner: I am not a big fan of the banners in general. And I don’t think we need one for mana purposes in this deck. Also it is just a waste of time if you play it on Turn 3 when you could also play a morphed creature that can actually do something sensible. That you can sacrifice it for a card doesn’t make it more appealing. It just replaces itself for a total of 6 mana. Complete waste of time.

So this is our deck! I think it already has the potential to win against some of the weaker decks out there. It has two cards that act as countermagic which might help to thwart the plans of some of the stronger decks too. Elvish Mystic and Heir of the Wilds are both pretty good starting creatures but with a total of four copies we won’t see them every game. Our midgame apparently consists mainly of morph 2/2 creatures, which is not great but, in the just for fun area, also not too bad. Late game we can then turn our creatures face up and support them with some of our spells to remove the opposition and go for the killing blow.

I expect the deck to struggle against opponents that are fast and aggressive. I see us as very vulnerable until Turn 5 or 6, and if the enemy got too big a lead until then it is unlikely that we can turn it around. Also cards like Drown in Sorrow could be a real pain, since many creatures we play will be 2/2 morphed. On the other hand once we get one or two big creatures we should be able to win most of the time, if the opponent doesn’t have any removal spell available.

What do you think? Does Temur Avalanche work? Is it better than Mardu Raiders? Do you agree with my choices of best and worst cards or are they totally off? Let me know in the comment section below or on MTGO under the screenname Gurkengelee.