Hello and welcome to the information page for Vivat Centum‘s December 1st, 2012, installment! All prizes, pairings, standings, and winning decklists for this event will be featured on this page. Scroll down for information on how to register for the tournament, claim any prizes you have won, donate to the tournament, etc.

You can find results here!

To register, you must do the following before December 1st, 2012, 3:00pm PST (23:00 UTC)! (NOTE: This is a different process than we used during the first Vivat Centum tournament of the series.)

After you have done so, go to THIS PAGE to register your deck for the tournament. Once registered, this must be the deck you play — card for card — during each round of the second tournament of the series. Then be sure to show up to the room “vivatcentum” in Magic Online (just type “/join vivatcentum”). The tournament organizer will be in that chatroom 45 minutes before the beginning of the event. If you have not registered for the event and registered your deck by the start time of the tournament, the Gatherling software we will use will automatically drop you from the event.

The event will start immediately at 3:00am PST (23:00 UTC). Any user not online and joined to vivatcentum (or previously joined within 45 minutes of 3:00pm PST (23:00 UTC) will be dropped before pairings. You will also be dropped, as noted above, if you have not registered your deck properly by that time. Please do not be late!

Each subsequent round will start after all previous round matches have been completed and recorded. Please do not leave your computer for too long at a time lest you risk game/match losses. 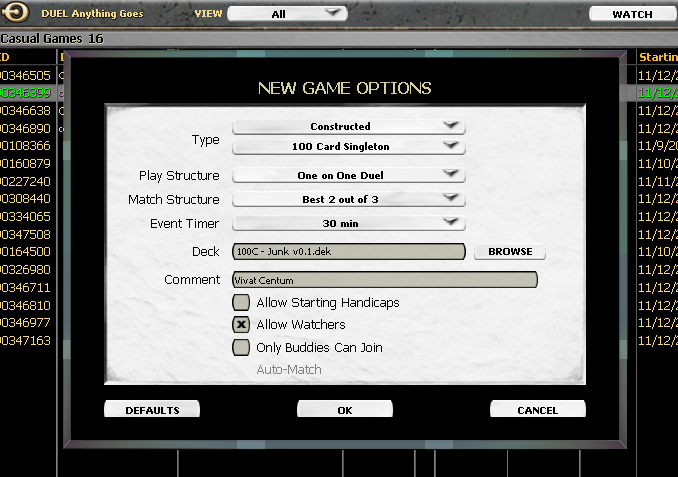 Players who went 3-0 in the previous tournament are the following. Click on each to see his or her decklist:

Players who went 2-1 in the previous tournament are the following. Click on each to see his or her decklist:

Note: Other secondary prize pool item donations have been rolled over for this (i.e., the second) tournament in the series. They are as follows: