I had the best of intentions last week. I built a UW Delver deck and was all ready to run it through an imaginary gauntlet of decks I thought would be popular in the format. So I started with the obvious favorite to test against, BW Tokens. I decided that if this deck couldn’t beat BW Tokens consistently, it wasn’t worth playing.

And sadly, it couldn’t. As much as I like Invisible Stalker and Delver of Secrets, I couldn’t get through a wall of tokens unless I had Stalker + Runechanters Pike. I usually won those games. Usually, but not always. Sometimes they just had an Intangible Virtue and followed up with Lingering Souls and/or Increasing Devotion and raced me. It was very depressing to see how much damage output tokens give you.

I know could’ve tuned the deck a little more to beat up on BW Tokens, but that’s metagaming in a one-deck metagame. I still had no idea what the format would shape up to be. So instead, I figured I’d spend this article’s length looking at the few tournaments that have happened so far since the prerelease events started firing. It’s an early look at the metagame to be sure, but looking at how the early events are shaping up is proving to be interesting. Let’s talk about the more popular decks I’ve seen flung around to properly assess the metagame.

First up, control is basically at the low end of the spectrum now. Token decks have been popular in the past, but the rise of the UR Invisible Stalker decks led control decks to take a different form, one withTribute to Hungers and Liliana of the Veils. But right now, Dark Ascension has led people to adopt token strategies in a variety of color combinations. And Liliana and Tribute are unsurprisingly poor against tokens. People are still playing Liliana, but I personally do not believe now is the right time for her. The average case with Liliana is that you get half of their Gather the Townsfolk and then it dies to the other half. Not particularly spectacular.

As for specific tokens decks, I found that RW – Boros – is the most popular, mainly because it’s essentially the old Boros deck, but with the Townsfolk-Champion of the Parish synergy added in. 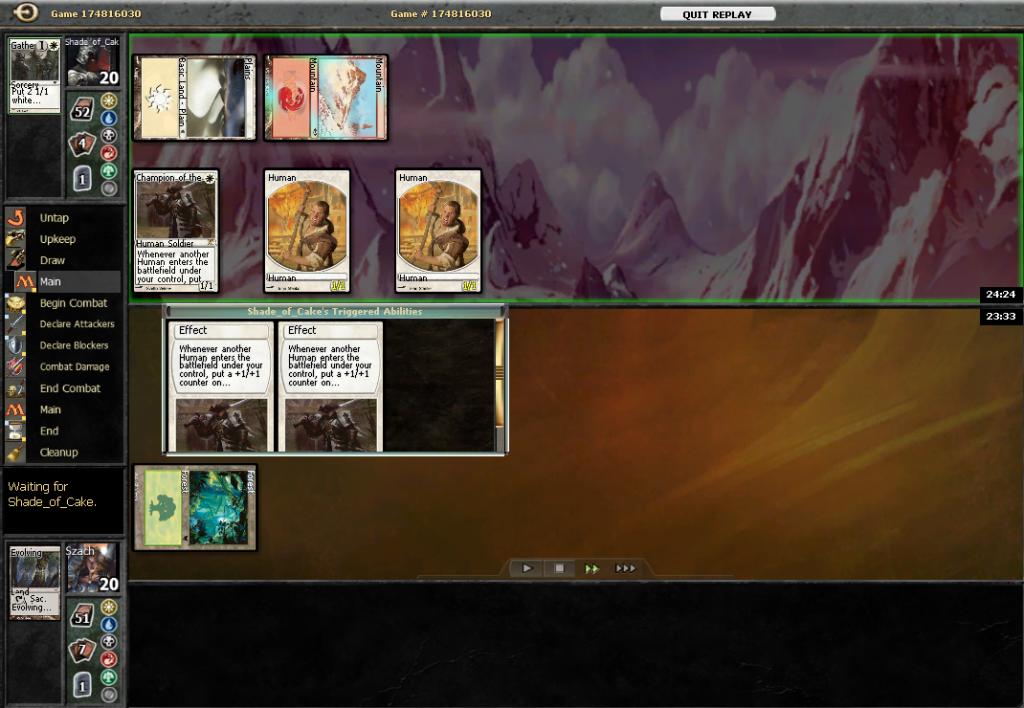 A better reason for Boros’s continued popularity after Dark Ascension would be Hellrider. The best creature in Innistrad Boros was Instigator Gang, no questions asked. It never really flipped and was much more fragile, but it let you kill them much faster thanks to your Spirit tokens. Now, why even play Instigator Gang at all? Hellrider is just better! It has the exact same damage boost as the Gang, with the added benefit of that damage being ‘unblockable’ like the Gang has only dreamed of. And it has haste, swooping down on Turn 4 and attacking for damage before it dies to their Brimstone Volley when they untap.

But let me put it in images. Compare: 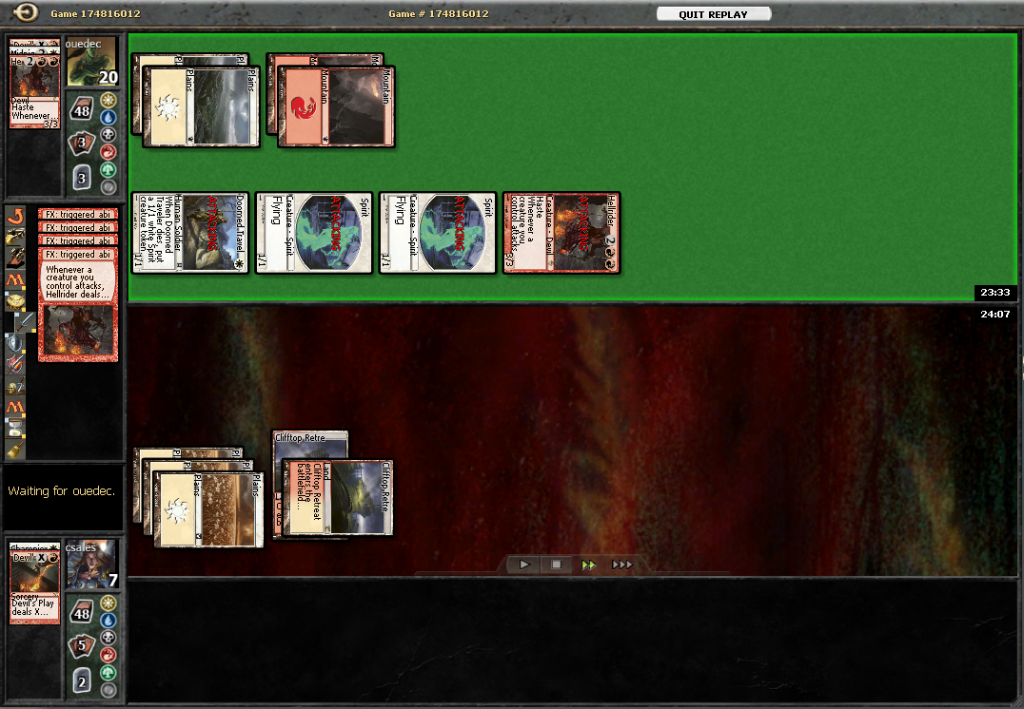 The second most popular deck I’ve seen has been BW Tokens, though not by as large a margin as I would’ve predicted. This is probably due to the inflated price of Sorin, Lord of Innistrad, thanks to prerelease week. But I’ve seen two distinct versions of this deck. The first is a more traditional, aggro version similar to the one I played a couple weeks back. This deck is very linear and straightforward ? I’ve heard of all the token cards in Innistrad Block referred to as a ‘Precon deck’ because it’s like Wizards of the Coast has built the deck for you. Throw in some Lingering Souls, add a dash of Intangible Virtue, and spice with Sorin for good taste. But – like spaghetti – just because the recipe is a bit straightforward doesn’t mean it isn’t effective (or delicious). This deck is mean. Remember when Squadron Hawk was running around all of Standard even after Jace, the Mind Sculptor was banned? Now imagine that you could play twelve Hawks and you had anthems and planeswalkers that synergized with the rest of your deck. Oh, and also you have this insane land called Vault of the Archangel that lets you be unable to lose any sort of aggro matchup if you manage to activate it with a couple of creatures in play. I’m actually very excited to play this deck on camera; it just looks so strong and resilient! I could go on about how this deck has improved because of subtle things like having an actual curve now (Thanks, Gather the Townsfolk!), but there are other decks to talk about.

The second version of “BW Tokens” is more of a slower, grindier deck that splashes green for Garruk Relentless and plays for more removal. It takes a control role by trying to tie down the board through its planeswalkers and larger creatures. Again, this deck is not very popular thanks to Sorin’s pricetag. However, it is still a competitor. It is yet to be seen whether it is more effective than a more aggressive and streamlined version of BW. I think right now, BWg needs to be geared toward acting as a control deck, playing Curse of Deaths Hold and such and winning on the backs of planeswalkers. Lingering Souls blocks quite well, after all.

Okay, now let’s talk about control. There haven’t been many showings of control since Dark Ascension started getting played. Vengeance has floundered and BUG is all but dead. These decks need retooling since they are both still attacking yesterday’s metagame. In the case of Vengeance, any Burning Vengeance deck nowadays probably needs to start splashing black. I remember the matchup against Innistrad-only GW being about even if they dropped Intangible Virtue and had more tokens than I had flashback spells. Now, Lingering Souls is just about more tokens than you can deal with – in one card! It’s probably wise to not consider playing a control deck without several copies of Sever the Bloodline.

BUG has had a couple of variations, the most popular one involving land destruction like Bramblecrush and even Maw of the Mire (I’m not joking), and tries to win with Nephalia Drownyard. I actually hated this version of BUG. It was basically good against every control mirror ever, thanks to the increased land count, uncounterable win condition and getting ahead on lands because of your many Stone Rains, but it floundered against any dedicated aggro deck unless they had a slow start. While you can still win games with that type of strategy, I wouldn’t sleeve up this deck and hope to avoid aggro right now.

Jund is looking fine, however. In my experience, Jund has always been that deck with an insane matchup on aggro decks and an unwinnable one against opposing control decks. So now that the field is mostly aggro, any BRg deck with a playset of Curses and Sever the Bloodlines stands to do fine.

Bottom line on control is that I would make sure I could deal with Lingering Souls AND other cards before I would sleeve one up. If you really don’t feel like attacking right now, Jund is probably your best bet.

The Oddball Decks and Brews

The odd man out is always the Splinterfright deck. Splinterfright got a couple of new enablers like Trackers Instincts, but didn’t really get any exciting new ways to actually win games. You’re still relying on winning games with Splinterfright and Kessig Cagebreakers and Spider tokens; Dark Ascension did nothing to change that. As much as I wanted this deck to gain more new tools and win conditions that weren’t so vulnerable to removal, it didn’t happen. That said, I’m not sure how the deck fits into the metagame right now. It can’t beat multiple Sever the Bloodlines, but there’s not a whole lot of control right now. But can it race the various token and Hellrider decks? Splinterfright always needed a lot of time to get set up for a large Gnaw to the Bone; are the aggro decks too fast to allow that now? I’m not sure, since I haven’t tested with Splinterfright decks much.

Another deck I haven’t seen any results in Dailies with but which crushed me several times in the 2-Mans was Tonkatwuck’s RG Stompy deck. Not really werewolves per se, just value creatures in red and green with undying. It’s surprising, but Young Wolf is a card that deserves more credit than it gets. Any card with undying makes combat harder for your opponent and naturally dodges wrath effects, so any deck that utilizes creatures that get bigger and complicate combat stands to do well in a creature environment. Though, the main selling point for me was seeing Vorapede get cast against me. That card is gigantic, tramples, blocks well after it attacks, and doesn’t die. Why aren’t more people playing this card?

A third deck that has done well in a Daily that interested me was Mono-Red by Butakov. Since I’m writing this before WotC updates the What’s Happening page for what is now Saturday, I don’t have direct access to his list. But it’s interesting to me that such a deck 4-0′d. His deck looked to be built for speed, with a bunch of 1-drops (Reckless Waif, Stromkirk Noble, and Forge Devils) to accumulate damage and board position, and then he drops Hellrider and kills them. Clear out all the blockers with burn spells. I don’t know if this sort of record is sustainable, because all the Mono-Red decks have dropped off in the past, but this one is definitely worth looking twice at.

That’s all for now! I’m sorry that my gauntlet-running didn’t go as planned, but I’m happy to have written this article. A large part of playing in tournaments is looking at what’s good in the moment, and right after the prerelease when no one is sure what’s good is a good time to gather as much information on the metagame as possible.

Thanks for reading!
-Lee McLeod