Hello everybody! It’s nearly been a year since my first MTGO Academy article. Do you know how I can tell? Because that article covered the (then fully spoiled) Magic 2013 core set, and spoiler season for its successor is currently underway! While this won’t be a complete set review, it will (hopefully) be an insightful glimpse into some of the cards that will likely turn heads, and even see some competitive play.

Allow me to admit ahead of time that I may overlook some cards while overvaluing others. This is due to the fact that evaluating cards before getting to actually try them out is not always easy. Regardless, I will do my best to be honest and impartial when looking at these potential new recruits. It’s time to be spoiled!

One of the defining attributes of Magic 2014 is the return of the slivers tribe. Slivers are characterized by their strength in numbers and their propensity for giving universal bonuses to each sliver on the battlefield. They are noteworthy in Pauper because they have not one but two(!) lords at the low cost of 2 mana. Lords (creatures that give other guys a buff, usually +1/+1) are already scarce in this format, which makes slivers a dangerous animal in the Pauper beatdown kingdom.

Because Magic 2014 ostensibly wants slivers to be a facet of both Limited and Constructed play, a number of cards with the sliver creature type have been spoiled at common! One of the big ones can be seen below, and its name is Predatory Sliver. 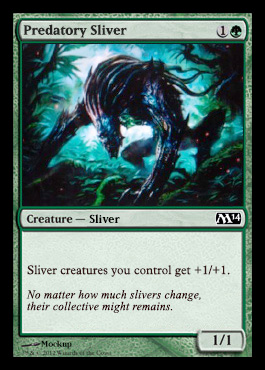 This card is awesome! It provides the slivers deck with copies 9-12 of a 2-mana lord, which is going to be hell for slower and less aggro-resistant opponents. On top of that, it’s a strict upgrade over Muscle Sliver and Sinew Sliver, because it won’t grow an opponent’s creatures in the mirror match. Let’s not forget that Plated Sliver already toughens up our team in addition to these 12 cards. Good luck sweeping that board with anything short of a self-abusing Crypt Rats or a considerably costly Rolling Thunder.

Let’s look at a decklist to see what these slivers are really made of.

As you can see, this list also incorporates Magic 2014’s Sentinel Sliver. This guy is slightly bigger than some of the older slivers (Gemhide Sliver, Quick Sliver and Talon Sliver) with its 2/2 base, and offers a relevant ability to keep racing options to a bare minimum for the opponent. The mana is one of the soft spots here (I’m not sure if what I have above is correct, but 15 Turn 1 white sources and four copies of Safewright Quest should prove helpful). In spite of this, I think we’ve got a decent Slivers starting point.

Here are a few sideboarding suggestions:

Strands is a usable means of counteracting Fling and Galvanic Blast, but our game plan against Affinity should be to outrace them with faster starts and the 12 lords in our arsenal. Dust to Dust offers up a useful tempo play by removing blockers or (occasionally) keeping the enemy off of critical mana. Sentinel Sliver feels like the least useful creature in the matchup, so I don’t see an issue with dropping to three copies here.

I envision this matchup as a pure race, and while Rancors can aid us in that department, Strands and Standard Bearer should have a higher degree of impact. If you feel comfortable cutting 1-drops here (I’m not sure that I do), I would also suggest boarding out two copies of Metallic Sliver in exchange for the two Aven Riftwatchers.

Not much we can do to stop them here (besides win first!), but we can try to slow them down. An argument can be made for keeping in Strands vs. Kaervek’s Torch, but that only works if they don’t bounce all of our stuff. Growth similarly fights Torch by keeping them off of insane mana. These decks are creature light, so dropping one Journey is not going to be a huge problem.

Depending on your preference. The game plan here is the same as the Stompy matchup, except Fiend plays far fewer creatures. The tradeoff is that they’re able to kill very fast thanks to Nivix Cyclops getting +3/+0. Standard Bearer is optional because it stops the Assault Strobe, Mutagenic Growth and Shadow Rift effects, and keeps burn from hitting more important creatures or the face.

Strands is much too defensive here and doesn’t have many powerful applications. The last cut is between Sentinel Sliver and Rancor, but I think Rancor will be more valuable against Frostburn Weirds and Spire Golems. While we could be playing Scattershot Archer in Sniper’s place, the absence of Quirion Ranger in our deck makes him less effective. Who knows? Scattershot may still be the better option.

Rancor does help us race them, but we should still have a pretty fast clock without it. I’m also really concerned about Kiln Fiend, since their ability to burn away blockers and smash for a lot is one of the best ways to steal games from us.

Let me know in the comments section if you think I missed any relevant matchups. From there we can figure out some additional boarding ideas!

For the sake of variation, we’re going to start with a decklist this time!

As you can probably tell, this is a deck built around Advocate of the Beast, another new entry from Magic 2014. Advocate is a Regal Unicorn attached to a Forced Adaptation, with the added benefit of targeting any beast we control with his ability.

What I’ve drawn up for him is a slightly bigger than Stompy green beatdown deck. Ramp into dangerous monsters and pump them with Advocates, Rancors, Slaughterhorns and Vines of Vastwood, which doubles as a protection spell.

While Blastoderm can’t be targeted with any of the pump, it is still an undeniably formidable beater. Grazing Kelpie is possibly underpowered, but persists infinitely thanks to Advocate’s +1/+1 counter bestowal. The pseudo-graveyard nuking can blank the usual Rancor and undying triggers, Mnemonic Wall and Unearth targets, etc. Monstrify might be just the trick for mitigating flood. It also pumps up mana elves in the late game, and keeps the trampling Garruk’s Companion and hexproof Primal Huntbeast in the red zone where they belong.

I wanted to start with mono-green so that the core essence of the deck could be identified. Down the line it may prove fruitful to move into red (which possesses beasts like Furnace Scamp and Kiln Fiend), or perhaps even black (for Blind Creeper and Wretched Anurid). It’s my opinion that mono-green is the best starting point, so let’s see how it fairs before getting too ambitious.

Don’t Call it a Comeback

Despite having 80+ spoilers, we have yet to discover Magic 2014’s returning mechanic. There are an extremely high number of possibilities, but my guess would be something that will play well with the slivers tribe, if not juxtapose said tribe in a dynamic way.

Battle cry would work well in a slivers-esque swarm archetype for obvious reasons, but it is a relatively recent mechanic to bring back. At the same time, it is considerably linear and straightforward, which tends to be the name of the game for core set. I think the biggest problem is that battle cry already occupies a similar conceptual space as battalion (both want multiple creatures to be attacking), which could result in “too many” triggers occurring all at once (at least in Standard).

With Innistrad Block already showcasing flashback and an overall thematic interest in the graveyard, I don’t really see something like dredge or unearth returning this soon (don’t forget that we will still have scavenge even when Innistrad is rotated out). In all likelihood, something considerably generic and uncomplicated will be the best fit for the Magic 2014 returning mechanic. It looks like we’ll have to wait until the rest of the set is spoiled to do any more speculation. With that being said, let’s talk about what will be coming up in future installments of this column!

I want to share my latest Affinity list with you guys because I’d like to try and showcase Affinity a bit more in the near future. It is one of the top contenders in the format, and can do some very broken things. In my opinion, it’s also really enjoyable to play. Take a look at this main deck:

For the sideboard, I’ve been using this:

That leaves three slots I’ve been tinkering with and am not quite sure about. Sideboard aside, the initial 60 have been really solid. You may remember that I piloted a similar-looking list to a 3-1 Daily Event finish in this article, and I’ve really appreciated the less arduous mana requirements. The land count of 19 has felt really good, and so has the trimming down of Springleaf Drum from four copies to three.

Terrarion over Prophetic Prism helps us build the artifact count on Turn 1, and has fewer drawbacks in a RUG deck than it does in a four-color deck. Somber Hoverguard is still in testing, but hasn’t caused any problems for me (in fact it’s really nice to have some evasion and interaction with fliers around, though the Hoverguard isn’t Turn 2 cast-able like Auriok Sunchaser).

What I’d like from you guys is a handful of suggestions to help make this list as good as it can be. What should those last three sideboard slots be? Should anything be taken out or adjusted? What are your thoughts on Affinity in general? Does it deserve its spot among the top decks, or is it too easy to “hate” (with cards like Gleeful Sabotage and Gorilla Shaman)?

It’s great to have exciting commons spoiled this early on, since we often have to wait until the tail end of spoiler season to find any Pauper playables. I’m hoping for more interesting cards to appear, and wouldn’t be surprised if more playable slivers show up. Let me know what you think of the spoilers so far, and any thoughts you have on this article. Thanks for reading, and please comment!

You can find Jason
hosting the Pauper’s Cage podcast
on MTGO as BambooRush
on Twitter @dimecollectorsc
and on Youtube at youtube.com/dimecollectorsc