Welcome to Part II of “14 Pauper Cards to Brew with This Year!” As I’m sure you’ve guessed, it may be beneficial for you to read Part I before we get started, though doing so is not mandatory. Our goal here today is to explore the latter half of our 14-card list, and consider a deck option or three while we’re at it.

The following cards are listed in no particular order, and the majority of them are creatures (hope you don’t mind). Well, let’s get on with it already!

A slightly narrower (but also less costly) Auramancer/Sanctum Gargoyle effect, Leonin Squire is quite the Grizzly Bear with value. It doesn’t hurt that white already has a number of cards that care about artifacts (Court Homunculus, Sanctum Gargoyle and metalcrafters like Auriok Sunchaser come to mind).

One of the best card cycles to incorporate synergistically with Squire are the Spellbombs. The original cycle (AEther Spellbomb and Pyrite Spellbomb, for instance) gave us either the effect or the cantrip. The latest cycle (Nihil Spellbomb, Origin Spellbomb, etc.) potentially gives us both. Which Spellbombs are the “best” ones to be using? It sort of depends on what we want to accomplish. In a vacuum, however, it’s hard to be too mad with Pyrite Spellbomb.

Leonin Squire has a considerably synergistic pal in Classic Pauper, albeit in another color. I bet you know who he is, too! 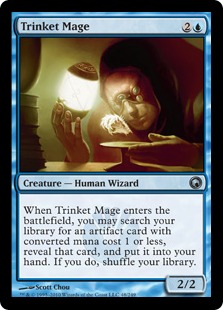 An Azorius artifact value deck seems like it would be pretty sweet. Could it compete with the Dream Stalker-“Azorius Kitty” decks? Perhaps not. Additionally, it’s very important to make sure that a Leonin Squire deck has a coherent plan, and isn’t just a bunch of synergistic things taking up space. For a solid example of this concept (that just so happens to feature Leonin Squire, Trinket Mage and Spellbombs), check out this previously referenced Pauper theory article by Academy’s former columnist souljah632.

So the basic questions to be asking about Leonin Squire are: What does a deck playing Squire actually do, how many “good” targets exist for him in Classic Pauper, and how many targets should we play in our deck?

Here’s hoping my decklist below will answer some of those questions.

This deck has a very clear plan: beat opponents down! 32 artifacts at relatively low costs contribute to explosive starts and undercosted aggressors. Sound familiar? Mono-White Metal may be a “worse” version of Affinity, but has some clear selling points. The first is a more streamlined mana base, which means our Turn 1 and Turn 2 plays can be focused on presenting threats and setting up the most devastating attacks. The second is more evasion (in this case, Auriok Sunchaser and Glint Hawk Idol.

On the contrary, Mono-White Metal has nowhere near as much card advantage as Affinity does. This is where Leonin Squire comes in. Squire can pick up everything from Court Homunculus to our free regeneration spell Welding Jar. We’re also packing my janky reach suite of Blazing Torches with the potential for Squire recursion later in the game.

Is this the optimal Leonin Squire shell, or are there more promising possibilities out there? Let me know what you think!

Freed from the Real

Freed from the Real is a bit of a no-brainer. Many have worked toward breaking the card in Classic Pauper, but no one has managed to promote the enchantment aura to top-tier status.

Freed carries the same weaknesses as most auras, including the danger of the creature we’re hoping to enchant being killed while Freed is on the stack. Another notable downside is the fact that a Freed from the Real combo requires a number of components to be in place for us to win.

The most common Freed combos involve enchanting a creature that can tap to generate 2 or more mana, and then using 1 of those mana to activate Freed’s untap ability. This process is repeated constantly in order to generate infinite mana.

With infinite mana we can Fireball the opponent out of the game with Kaervek’s Torch or Rolling Thunder, some sort of Drain Life variant, or possibly mill them with some obscure cards I can’t seem to think of at the moment.

A couple creatures that immediately come to mind are Axebane Guardian, or any creature that untaps a land (think Arbor Elf or Tidewater Minion on a Utopia Sprawled Forest, or in Minion’s case even a Karoo).

I’m looking forward to hear some more of your thoughts on this long-standing combo piece!

While expensive, Ivy Lane Denizen has a formidable ability that can really put board positions over the top. What I’m wondering is whether or not a deck with Ivy Lane Denizen is fast or high impact enough.

Here is a deck idea that may help us find out:

I’d like to thank Academy’s ChrisKool for giving me some pointers here!

The mana acceleration not only helps us flood the board, but the combination of Avacyn’s Pilgrim, Borderland Ranger and Civic Wayfinder also allow us to play a high density of green sources in our manabase. This goes a long way in the realm of consistency.

The white splash is for Fortify, one of the faster pseudo-anthems I could think of, and Journey to Nowhere. I originally envisioned Selesnya Evangel and Travel Preparations in the deck, but the truth is they might not be fast enough to have a considerable impact.

Ivy Lane Denizen obviously works well with Fists of Ironwood and Scatter the Seeds, and just think of the impact any token generation has when paired with multiple Denizens. Furthermore, Essence Warden synergizes with just about anything we want to be doing.

While I’ve seen Denizen get pretty gross in the Standard Pauper arena, only time will tell if it can earn a spot amongst the Classic Pauper chosen.

I’ve noticed that a lot of people like playing with this card. Though Gatecrash Limited was not something I had the pleasure of playing, I bet the card had some degree of impact there since aggro was quite viable. In Pauper, Madcap Skills has the potential to work well if it’s enchanting the right creatures.

Down the line there may be room for a Gruul or Naya hexproof deck, though as it stands currently Selesnya is just better (think Armadillo Cloak and Ethereal Armor). The fact that Aura Gnarlid and Silhana Ledgewalker are already pseudo-unblockable doesn’t do a lot to boost Skills’ appeal.

In spite of this, Skills might perform well in something along the lines of Heroic Red, an aggressive “Stompy”-style red deck with pump targets like Akroan Crusader, Two-Headed Cerberus and Vault Skirge. If you have any additional ideas when it comes to going mad, please share them!

I remember Immolating Souleater getting a considerable amount of attention when it was spoiled. The idea of Phyrexian mana had some people up in arms, and others looking for ways it could be abused. Souleater has similar pros and cons to many early aggressive drops. It can equate to a lot of damage if allowed to connect, but it otherwise is vulnerable to removal, sturdy blockers, etc.

The more obvious Assault Strobe, Fling and Tainted Strike pairings might end up being threatening enough to make Souleater a thing, but we have to decide if it’s more viable than the creatures that already have infect (or can attack for a lot of damage without the whole paying life requirement). It’s an interesting proposition, and may just take the right card being printed to become a reality.

Numerous people have suggested that I play Horned Kavu in my Gruul decks. While I’ve never been big on the guy, there are some merits to including him. To start things off, the base stats are just fine (assuming we think of this card’s “downside” the same way we would Kor Skyfisher’s). Unfortunately for us, x/4s are beyond plentiful in Pauper. This means that Horned Kavu will be easily removed in a high number of matchups. If we are willing to accept that, then we can start thinking about the potential benefits of Kavu’s bounce clause.

As far as red creatures go, there are some damage dealers and artifact busters we may want to bounce (Keldon Marauders and Tin Street Hooligan among others), and in green we have various mana dorks Borderland Ranger, Nest Invader). Perhaps the big winner is Blastoderm, whom we can attempt to repurchase before having to sacrifice.

Is all this stuff good enough to make a deck with? For me it’s a hard sell. I’d like a Gruul deck to be awesome in Pauper as much as the next guy, but I don’t know if Horned Kavu is the man for the job.

And now it’s time for our very last card! I’ve been working hard to make this guy usable in the format, and I hope some of you will too!

Ah, Mister Electromancer. He’s seen a very small amount of Pauper play, but maybe that can change this year! Like I said, I’ve spent a bit of time trying to see if he’s playable. Here is about where I ended up after several matches and adjustments:

Some of the other cards I experimented with included Arc Lightning, Counterspell, Deep Analysis, Errant Ephemeron and Omenspeaker. Counterspell is obviously a great asset, though I think I’d up the blue mana sources a bit to include it. Electromancer obviously cheapens the other counters, and I’m playing Mana Leak because it seemed like the best option for countering Mono-Black Control’s 3-drops, Corrupts and Gray Merchants. I’m still not a huge fan of Leak in this format, but sometimes it ends up being usable.

Benthic Giant came in later, and only has the benefit of being hard to kill for some people. I liked him better than Ephemeron in some ways, since deciding when to suspend Ephemeron (versus waiting to hard-cast it) tended to be awkward. It also just dies to everything a Gray Merchant would, while at the same time taking longer to hit the table.

One of the seemingly strangest inclusions is Kabira Crossroads, though we are otherwise void of life gain. Crossroads does put in a bit of work, and it’s not unheard of to draw three or so a game (thanks to the amount of card draw we’re packing). The removal suite further guards our life total by having answers to creatures of all sizes and abilities. The Curse of Chains effects and Harvest Pyre are intended for big creatures, but are flexible enough to stop early dorks too. Electrickery and Staggershock net us multiple creatures, which is typically what a control deck wants to have happen.

Don’t get me wrong, this deck is very fun to play (and I’ve desperately tried to make it viable), it just loses to too much at this point in time. Controlmancer’s closest relative is the Izzet Control deck with Delver of Secrets that has been doing quite well in the current environment. While that deck is certainly better, there may be some sort of hybrid list (falling in between Controlmancer and Izzet Control with Delver) that can be cooked up.

While I’m not saying that this is the best style or strategy for Goblin Electromancer, it is the one I’m most interested in at present.

And that concludes our list of 2014 brew subjects! Of course with Born of the Gods soon coming to MTGO, there will be even more concepts and concoctions flying around. With that being said, I hope you’ve enjoyed what has been presented in these two articles. I’m looking forward to hearing your thoughts. As always, thanks for reading, and please comment!