Since the first Commander pre-con decks were released in 2011, Wizards of the Coast has seen these supplemental sets partly as a way to introduce new eternal-playable cards into the pool that are either too powerful, too narrow, or otherwise just not a good fit for printing in a Core Set or normal Expert-Level expansion. These sets have consistently delivered impactful cards for the eternal formats. With Commander 2011, we got Scavenging Ooze, a card that heralded the rise of Maverick as a top-tier deck in Legacy. Planechase 2012 gave us Baleful Strix and Shardless Agent, giving birth to the eponymous “Shardless BUG” deck and spawning a few fringe Legacy decks built around Tezzeret, Agent of Bolas. Commander 2013 brought us True-Name Nemesis, which warped the entire Legacy format around it for a time, and also gave us the powerful Toxic Deluge.

Will Commander 2014 keep up the tradition? 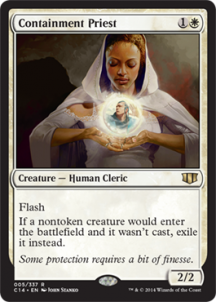 This card is very exciting. I had often thought about how one could create a card that hosed all of the various “cheat fatties into play” strategies at once, and how you would template such a card. Containment Priest is a very simple and elegant solution to the problem. Before we delve into the specifics, let’s talk about how this card works. If it is on the battlefield when another creature would enter the battlefield, it creates a replacement effect. Replacement effects do not use the stack, so the impacted creatures will never enter the battlefield, cause other effects to trigger, or have an opportunity to use any abilities.

To see how useful this ability is, let’s take a look at the cards and strategies that it shuts down:

Now, the card does leave a couple of small loopholes. For one thing, it applies only to creatures. For another, it doesn’t apply to any creature that was cast. A card which is actually cast from a zone other than the hand will still enter play, as will a card which is cast for free or at an alternate cost. Accordingly, Containment Priest will NOT prevent the following cards and strategies from working:

The list of impacted strategies is extremely long, and includes many of the most powerful combos, engines, and win conditions in eternal formats. By virtue of having flash, you can also use this as a “gotcha” play, effectively countering the opponent’s play and leaving around a 2/2 body that will have to be removed before the opponent can try again. Another upside of having flash is that Echoing Truth, the bounce spell most commonly used by combo decks to remove hate cards, is a less effective answer than usual. You can recast the Containment Priest at instant speed, so having it bounced at the end of your turn isn’t that bad so long as you have two spare mana available. Finally, as a Human, this is in the best tribe for Hatebears decks using Cavern of Souls. This card should absolutely see play. 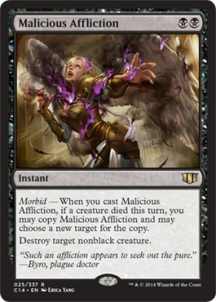 This is a very cheap and flexible 2-for-1 removal spell. The two questions I see with this are: Can the decks that want this reliably hit double-black, and can they trigger the morbid often enough and cheaply enough to have remaining mana to cast this spell? The most likely home would be in Legacy, particularly in the BUG Control or attrition-based decks such as Shardless BUG and Punishing Jund. Those decks often run Deathrite Shaman, so the casting cost shouldn’t be too hard. Liliana of the Veil is the best way to trigger morbid, as it potentially kills a creature for no mana if you untapped with it in play. Cruel Edict, Dismember, Ghastly Demise or Murderous Cut could all trigger morbid for one mana, and are all reasonable choices in Legacy. You could hope to trigger morbid from trading creatures in combat, but that isn’t very reliable. Sacrifice outlets would also enable it, and decks such as Nic Fit with their Birthing Pods and Phyrexian Towers could be another home.

If you can’t hit morbid, it’s not as if the spell is completely dead. I think you’d want to have enough cheap removal to feel confident of triggering morbid the majority of the time, but it’s not rendered unplayable if you fail to do so. This is good enough to see play in Legacy, and being a targeted 2-for-1 gives it more power than many of the options currently seeing play. If anything holds it back, perhaps it will be a crowding of the mana-curve at 2, where Abrupt Decay is the premier removal spell at present. 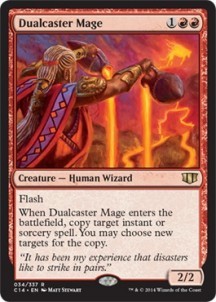 It’s the Fork-Caster Mage! This immediately evokes comparison to his blue cousin, Snapcaster Mage. We know Snappie is powerful in Legacy and Vintage, because rebuying powerful spells is a powerful play. So how about copying powerful spells? There was a time when Fork was restricted in Vintage, under the old DCI philosophy that any card which allows you to cast a restricted card more than once should be restricted itself. Now we live in a world where Fork sees no play, nor do any of its nearly-functional reprints, and Regrowth is safely unrestricted. Of course, it tells us nothing merely to note that Fork sees no play. Nobody played Relearn in 2011, but that didn’t stop Snapcaster from barging its way into Vintage and Legacy. Adding a 2-power body to the spell obviously powers it up considerably.

So just how well does Dualcaster Mage stack up compared to Snappie? Dualcaster has an extra point of toughness, but this isn’t very relevant. Small creatures in Legacy and Vintage tend to have 2 power, so a 2/2 won’t survive any more combats than a 2/1 would.

Having to cast this while the spell you want to double is actually on the stack is ultimately the reason Fork-type spells don’t see play, and why I think Dualcaster may be a dud. These cards are terrible topdecks, doing absolutely nothing on their own, unlike Snapcaster which is the equivalent of topdecking the best spell you’ve played so far this game.

But wait! You can copy an opponent’s spell! Snappie can’t do that! Does that push Dualcaster into eternal playability? Unfortunately, I doubt it. Copying an opponent’s powerful spell is great, but may not actually stop your opponent from winning. What are you going to do with your own copy of Yawgmoth’s Will on an opponent’s turn? Not much. If you aren’t built as a Tinker deck, copying a Tinker will net you perhaps a Mox or Black Lotus, which is fine, but not if the opponent is assembling Vault-Key to win on the spot. You can counter an opponent’s counterspell with this, but that’s not very efficient in a counter war compared to, say, a Red Elemental Blast. You can copy an opponent’s removal spell, but that will still result in your key permanent being removed.

Copying a spell is powerful in the abstract, but when you start going into specific lines of play, it begins to seem awkward and underwhelming. That being said, I could imagine the UR Delver decks of both Legacy and Vintage giving this a shot. In the long run, I don’t think it will see play. 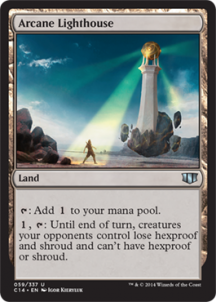 If only this caused creatures to lose protection as well, it would be a reasonable answer to True-Name Nemesis. There actually aren’t many creatures with hexproof or shroud seeing play in Legacy and Vintage these days. Geist of Saint Traft pops up occasionally, but that’s about it. Even if people were playing Inkwell Leviathan as a Tinker target, edict effects would be a better answer. In Legacy, Liliana of the Veil handles hexproof creatures fairly well, and Toxic Deluge is available, too. This would only see play if a dedicated hexproof deck were in the format. That pretty much rules out Vintage, but Legacy has seen a Bant hexproof deck pop up and win tournaments in the past. It is always deceptively powerful to have a counter-strategy stapled to a land. Right now, with the metagame as it currently stands, this land falls into the category of “powerful but unnecessary”.

I don’t see any marquee eternal all-stars here on par with cards that came out of these sets in years past. Containment Priest should see a fair bit of play, and Malicious Affliction has a future occupying one or two slots in some black-based control or rock deck. Dualcaster Mage is the card that looks like it should be the standout card of the set, but the effect it gives you isn’t as great as it looks at first blush. From the perspective of a long time player, this is a fun set, with lots of throwback references to characters from the early years of the game, such as Feldon and Titania. But as regards the competitive eternal formats, Commander 2014 doesn’t look poised to match the impact of its predecessors.