Sebastian (aka neuhier) is a statistician and has been a passionate Magic player since the time of Urza’s Saga. He still can’t decide if his biggest success was winning a draft at FNM or opening a Gaea’s Cradle.

I’m not a good Magic player. That’s what my credit card bill says. Personally it’s no problem for me to spend some money to have fun on MODO, but I really don’t like spending too much money. Recently an episode of the Limited Resources podcast reminded me to be more self-critical on the topic of how to get the maximum number of drafts out of my limited money.

There are basically three factors influencing the number of drafts you are able to play for a given amount of money:

1. Entry Fees: This is the price for the booster packs plus the 2-tix additional fee.
2. Win Rate/Prices: On MODO this is the amount of packs you win, depending on your skill and the payout-structure of the tournament.
3. Card Value: This is the value of the cards you pick up while drafting.

This article will provide some hints on the first two points above, but focuses on the third. I will present a card-price evaluation of the sets Gatecrash, Return to Ravnica, and Avacyn Restored. Based on the expected prices of the cards in these sets and the prices of each booster pack, I will point out which sets have the best expected value with respect to card prices.

For a long time I simply bought draft packages in the MODO store, consisting of three booster packs and two event tickets. For all of you currently doing the same thing, THIS IS WRONG! The price at the MODO-shop is $14 (14 US dollars). Now compare this to buying the boosters from, for instance, MTGO Academy’s bots. Their price for GTC boosters at the time of my authoring this piece is at $3.1/pack. This means that you are paying $9.3 + $2 = $11.3 for one draft. So you are able to save $2.7 per draft if you buy the packs from a secondary seller!

MODO offers three kinds of tournaments: 8-4, 4-3-2-2 and swiss. There is one way to do it wrong! I have to thank Limited Resources again for opening my eyes, namely that 8 + 4 = 12 total prize packs, while 4 + 3 + 2 + 2 = 11 total prize packs. It seems to be obvious, but before, I had never wasted a thought on that. The payout of swiss tournaments is 12 packs, too. It is a huge difference in the long run if you are playing tournaments for 12 packs compared to just 11.

I decided to play swiss, but 8-4 would be ok, too. Moreover, I’m buying my packs from bots trading in the Classifieds portion of Magic Online. Now I wanted to know, “Are there more ways to easily increase the number of drafts I can play per dollar spent?” Therefore I thought about the third part of my list: As I’m not much of a constructed player, I tend to sell the cards I draft from time to time. This directly led me, being a statistician, to the expected value of the card prices for different sets. I wanted to know if there were sets that were more valuable than others.

Thus, I checked the card prices on MTGO Academy for the rares and mythic rares of some recents sets. All the below prices are from the 13th of April, 2013. 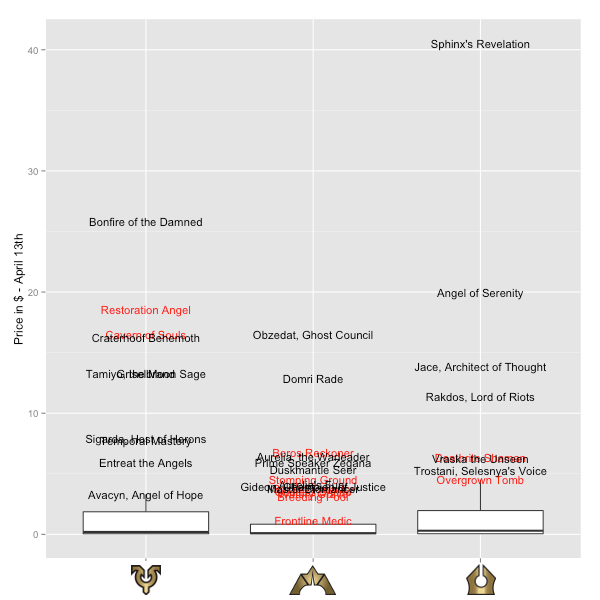 These so-called boxplots represent the prices. In this case the boxes in the bottom of the graph contain 75% of all rares and mythics of one set. They are the low-price rares. The more interesting cards are represented by their names in the top of the graph. You can see that Sphinx’s Revelation is the most expensive card, followed by Bonfire of the Damned. I guess most of you already realized that the red cards are of special interest, since they are rares (not mythics), e.g., Restoration Angel is priced at $17.90. This is important because rares show up when drafting much more frequently than mythics.

So do we draft RTR because of Sphinx’s Revelation? Or do we draft AVR because of the Restoration Angel, which isn’t worth that much but will occur more often since it is a rare instead of a mythic rare? Which set is better to draft from a financial perspective? We’ll have to figure it out, taking into account all the cards of one set and the corresponding probabilities of opening them. This is exactly the idea of expected value.

Let’s start with AVR as an example. Of course we are most interested in getting a Bonfire of the Damned. Luckily the probability of getting one is known: There is a mythic rare in 1 out of 8 packs. If we are opening a mythic rare, then it is one of the different mythic rares in that set. Thus we get the Bonfire in 1 of 15 cases of opening a mythic (since there are 15 different mythic rares in AVR). The final probability of getting a Bonfire out of a random AVR pack is 1/8 * 1/15 = 1/120 = 0.00833.

The expected value of a AVR pack is calculated by taking the price of the card, multiplying it with the probability of getting that specific card, and summing these values for all the cards in one set.

So the expected value of one AVR pack is $1.80. The following table compares the different sets:

Personally I was surprised by the huge difference between GTC and those other sets. Are we now able to make a final decision on which set to draft? Sadly no, but there is only one more step to go. Until now we did not consider the different pack prices. This may be done using the following table:

Depressing, isn’t it? Negative expectations aren’t good in most games. In the long run we will lose $8.45 for each AVR draft, $8.54 for each RTR draft, and $8.15 for each GTC draft we do. Based on this analysis, GTC drafts are the cheapest. The much larger EV of AVR and RTR does not compensate for the higher pack-prices, assuming that you won’t be winning any packs in the draft.

I was able to show that it is cheapest to draft GTC if you are not planning on winning any packs. Of course, you could remove the price for the packs from the calculation in the above table (the second row), if you are winning three packs in each draft in the long run. If you plan on winning an average of three boosters per draft, it is best to draft AVR, as its EV is the highest and you don’t need to consider the price of the packs in this scenario. But I guess this is pretty unreasonable, because you minimally would need to win 25% of your 8-4 drafts and place second in 25% of your 8-4 drafts to fulfill this condition. Whether or not this is attainable for you is not something I can calculate because each player drafts and plays differently, with different levels of seriousness and different skill levels. But you could certainly, upon estimating your winnings, recalculate using the above table to draw a conclusion — assuming you want to maximize the number of drafts you can do per dollar — regarding which set you should draft.