Greetings, goodly Magic the Gathering players! It’s time for another installment of King of the Scrubs. And boy howdy, is this going to be an example of scrubbiness. Scrubnitude? Scrubernicity? All of the above? I am a big fan of RoE Limited and I am always a fan of Sealed so I figured I’d do a KotS article on a RoE Release Sealed event. I thought maybe I could demonstrate my amazing ability to build the best deck from a given sealed pool and then impress you all with my incredible play skill. Unfortunately, 3 out of my 4 rounds were a complete train wreck and I want to talk about what went wrong. And maybe get some feedback from you guys. Was I just wrong when I did X? Were my keeps just terrible? Should I have played Green instead of either Black or Red? These are the types of questions I ask myself after the kind of backside drumming I received. Let’s get started by taking a look at the pool of cards I had to work with:

If you need a better look at this picture, right click and choose “View Image”

Taking a quick look at my colors, I think it’s safe to say that Blue is uninspired and White is just plain terrible. Blue has a couple of good cards in 2x Deprive and 2x Sea Gate Oracle, but aside from those 4 cards the only other cards I’d want to play would be Skywatcher Adept, Halimar Wavewatch, Frostwind Invoker, and Mnemonic Wall. The Lay Bare is fine, especially in Sealed, but over all I felt the Blue was just, Meh. Red looked really strong with a bomb in Lord of Shatteryourbrainsin, and the really strong Tuktuk the Explorer. The little 1/1 Tuktuk is one of those cards that make people play differently, especially, early in the game. He tends to be a 1/1 “unblockable” and then later in the game is a chump that upgrades into a threat. I had the good fortune to draft 2 in a team draft, along with 3x Cadaver Imp. I also had Drana…yea, we won. But anyway, I like that little dude.

Another Red rare in my pool is World at War. At this point, I haven’t played with it yet and was looking forward to casting it and attacking with a fully leveled Lord of Shatteryourspineinfiveplaces! Add in a few other decent guys and a couple of pieces of “not so great” removal and Red is definitely in. Also in are my 2 Eldrazi; Artisan of Kozilek and Ulamogs Crusher. Both are great in Sealed and are generally bombs if you un-tap with them on the board. Now the hard part.

My Black cards had several good removal spells, with Corpsehatch, Induce Despair, Last Kiss, and Vendetta. As far as creatures are concerned, Nirkana Cutthroat is great with just one level counter and “rare like” at level 3. Cadaver Imp brings back your bombs and combos nicely with Battle-Rattle Shaman. Much like Red, add in a few modest creatures and we’re good to go. A quick word on Thought Gorger: terrible. I do not like “all in” cards and this guy is pretty much all in, all the time. There are only a few instances where he would be good but just a few.

On to Green. I labored for many minutes over my Green. I love Pelakka Wurm and Joraga Treespeaker makes getting to the big mana a lot easier. Along with 2x Nest Invaders… Even as I type this, I feel Green was really the way to go but the lure of the Black removal was very seductive. That and I didn’t like to splash but I could have easily with Growth Spasm and Evolving Wilds. Hmm…King of the Scrubs indeed. At any rate, here’s what I ran with:

I thought the deck was pretty good. It had removal, a good curve, early creatures and great finishers. But perhaps the RGb would have been stronger.

I’m going to do something different with this article. Instead of going through the game play, turn for turn, I’m going to show some screenshots of board positions during my games that I thought were interesting or pivotal. Then I’ll share what I did…good or bad…

Round 1, Game 1 started really slow for me as I drew a bunch of lands in my first several turns and only played a Pawn of Ulamog and Essence Feed by Turn 6. While my opponent had an Overgrown Battlement, Ondu Giant, Totem Guide, and Makindi Griffin in play. He then played Eldrazi Conscription and I scooped. No screen shots for that one. I feel my keep of 4x Swamps, Pawn of Ulamog, Induce Despair, and World at War was fine if not exciting. I had removal and a dude but I didn’t plan on drawing 5 lands in my first 6 turns. Maybe it’s an obvious mully, but it seemed okay on the play.

Game 2 started pretty slow for me again but a Turn 3 Cutthroat allowed me to apply pressure but I took a big hit in the race when he put Boar Umbra on his Griffin. It was one of those things that if I had a 2nd Swamp I could have Vendetta‘d and 2 for 1′d…bla, bla, bla, waah, waah, waah, but I couldn’t kill it till the next turn and after my opponent cast Skittering Invasion, which I think is terrible, he put down a Hand of Emrakul, that I also think it terrible, but when you put the two together I guess it’s pretty good…especially against me… right now. Here’s what the board looks like on Turn 8: 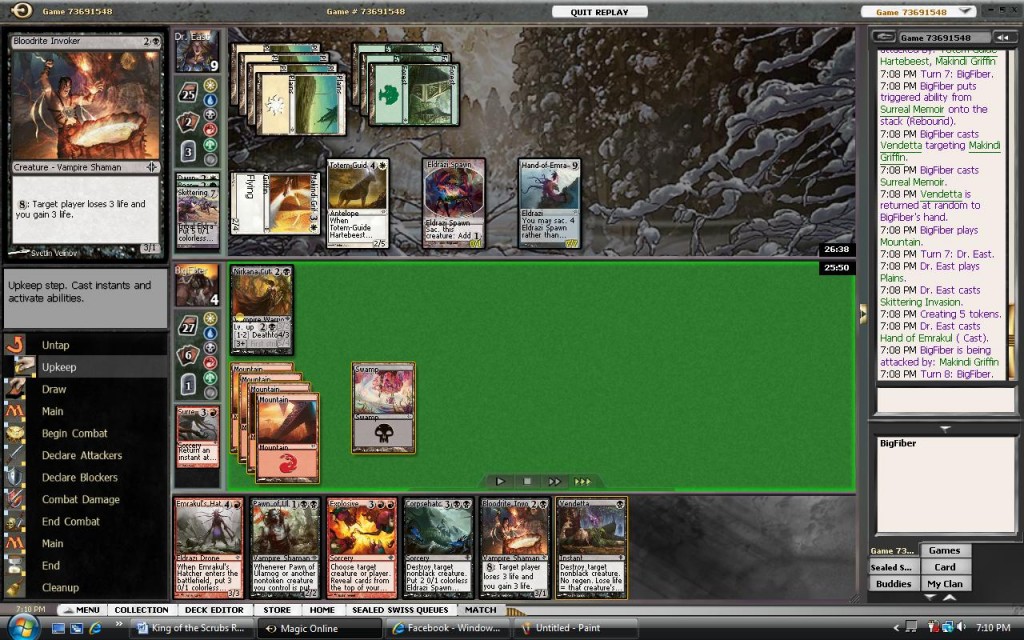 I know my position looks pretty bad here but if I draw a 2nd Swamp I can Corpsehatch the Griffin and have a couple of 0/1 chumps for the 7/7. Unfortunately, I draw Evolving Wilds and am forced to play Emrakuls Hatcher. After taking another 2 in the air and sacrificing 2 tokens (one sac’d, one blocking) I kill the Griffin and start to feel a lot better about the game. Next turn my opponent puts down Wildwood Invoker and Overgrown Battlement and I’m scared because he has tons of mana. I try to kill the Invoker with Explosive Revelation and (naturally) hit Null Champion. Explosive Revelation is fine but it does bad stuff like that too much and I’m starting to hate it…but the card draw is nice; maybe you can only aim it at small stuff and be happy with a bit of card advantage. IDK. So that’s the round because on his turn he swings and pumps and that’s that.

I honestly can’t feel too bad about that round. I felt like I was just a turn behind, the whole time the 2nd game. The first game was a classic flood…it happens. Let’s take a look at my Round 2 train wreck.

The first game looks like everything is great. Most of the game is spent with me and my opponent trading dudes and removal spells until turn 10 when I tap out and play my Artisan, getting back my Battle-Rattle Shaman. Here’s what the board looked like.

Game 2 seemed to be going along pretty well, until Turn 7 when (I guess) I made a tremendously bad play. Here’s what the board looked like:

I cast Vendetta on Bramblesnap thinking that the worst that could happen would be he taps all his guys and I take 7, but win on my turn. Unfortunately, I didn’t think about Might of the Masses… the one card he had in his hand. 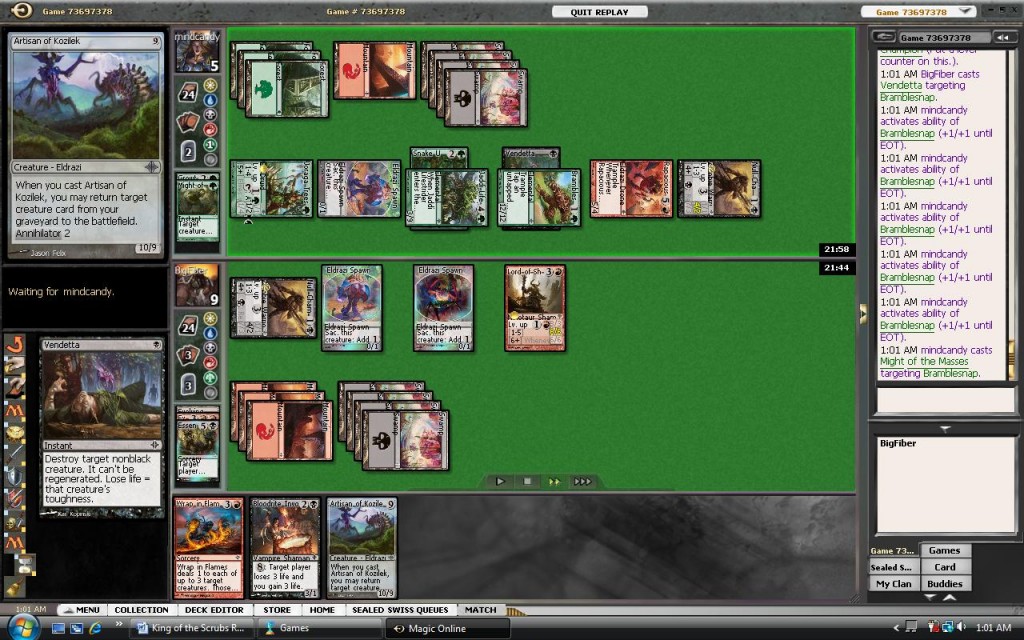 I guess I got greedy and should have played it more conservative. I was in no danger of losing next turn, especially because I was going to cast my Artisan. Sigh. But I guess my question for you guys is; was it a really, really bad play? Man that was hard to look at again… Let’s move on to Game 3, the tragic end to this tragic round.

I keep 2x Mountain, 2x Swamp, Tuktuk, Bloodrite Invoker, Surreal Memoir. Pretty solid hand, not great, but okay enough. Turn 6, this is what the board looks like: 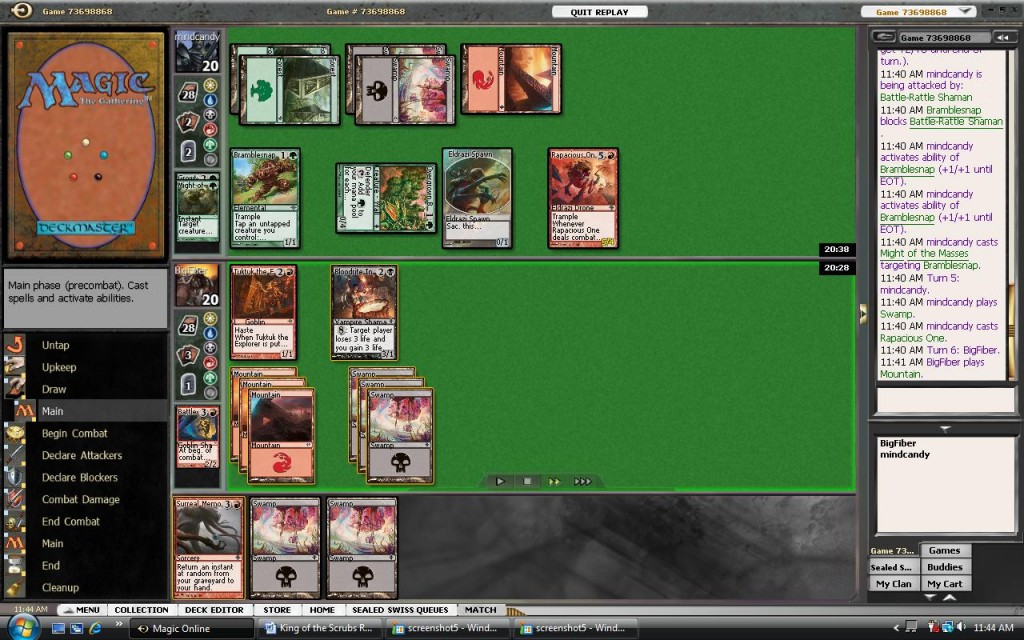 If you look closely you’ll see I drew 5 lands in 6 turns. It’s how I roll. Sigh. My opponent also used Might of the Masses again to wreck me by pumping his Bramblesnap and blocking my 4/2 attacking Battle-Rattle. It was like salt in the wound.

So, since I was planning to use this sealed for KotS, I felt it my duty to keep playing even though I was waaaaay past tilt. Like, pluck my eyeballs out of my head, tilt. It couldn’t get worse. Could it?

In Round 3, it does. This one’s all on me. Instead of casting Lord of Shatterskull I tried to kill his Stomper Cub with Explosive Revelation and I drew… Null Champion. Sigh. Honestly, I don’t think it would have mattered because this is what the end of the game looked like: 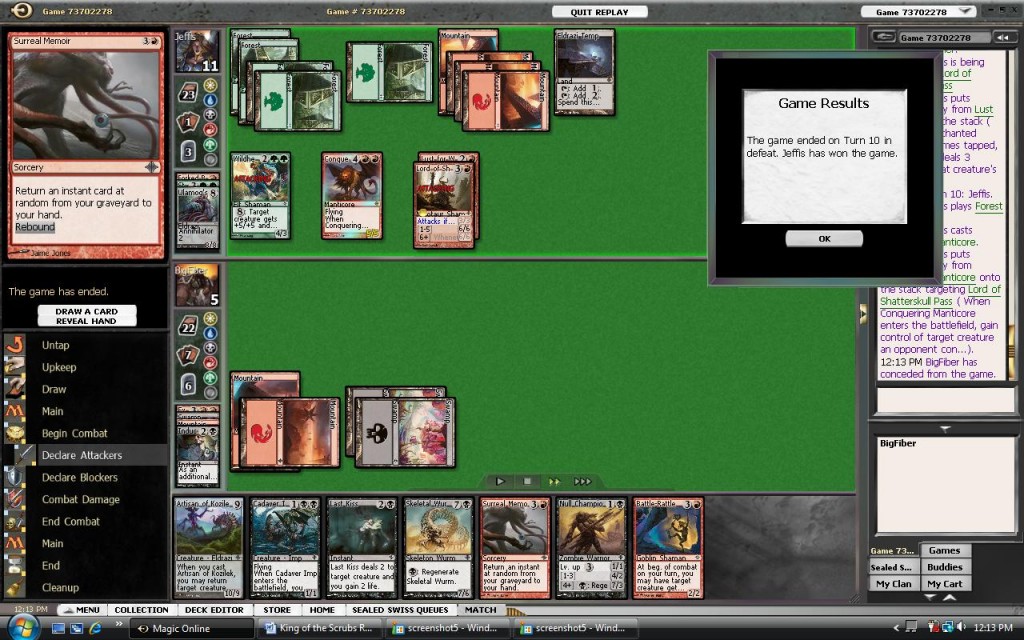 Even though I killed his Crusher with my Induce Despair, his Masticore ended it. And yes, he enchanted Lord of Shatterskull with a Lust for War. It was a race I couldn’t win. There is a small sliver of light in this dark storm of fail. I rolled my Round 4 opponent, 2-0. Let’s take a look at how awesome I am.

Game 1 I keep 2xMountain, Swamp, Induce Despair, Surreal Memoir, World and War, and Skeletal Wurm. I feel with Induce/Wurm+Surreal I can keep pretty much any threat they play, off the board till I can play my bombs. It didn’t even come to that as all he played was Zulaport Enforcer and Training Ground, while I played Null Champion (that he enchanted with Narcolepsy) and then Lord of ShattokI’llstopnow came to play. I induced his 5/5 Enforcer and he scooped.

Game 2 I keep 2x Swamp, Mountain, Vendetta, Tuktuk, Emrakuls Hatcher, Surreal Memoir. We play some guys, I kill a 4/4 Champions Drake, cast Lord of youknowwhat (I guess I should draw him more if I want to win), drop my opponent to 3 and then rip my 6th land to cast Essence Feed for the win next turn.

Honestly, both games took 5 minutes total. It’s a little strange winning like that after 3 rounds of hell. But then I thought that my 4th Round opponent was 0-X like me and may have just had a terrible deck or been new to the game. Neither of those options made me feel any better.

Well, that’s my sad tale. I mean sad. Sadder than eating cold Pop Tarts by the light of my refrigerator at 2am. Sadder than the Academy award winning movie: Precious. Have you seen Precious? Good grief. Watch this movie and I bet you appreciate your life a lot more. So I hope you were at least entertained if not marginally, magically enlightened. I know I learned a bit more about how I may be too quick to build a certain type of deck. (Read, I like RB) Remember to take your time and explore your pool for a while to find the best build.

Join me next month when I go back to drafting RoE. I’ve had a good amount of success in RL drafting all the colors of Rise and absolutely love the format. Good luck, have fun and thanks for reading!