Much has changed since my last pre-release (in 2006, with Coldsnap, brrr), with events switching to the store level (and with me switching to the Magic Online environment). Since I’ve recently broken down and purchased paper (to maintain my Cube experiment), the Avacyn Restored paper prerelease was mighty tempting. It even had an ample supply of +1/+1 counter-generating cards to acquire for said cube! The Helvault promotion sealed the deal, and I made plans to attend an event with some paper-playing friends.

10:50 PM EST: Starbucks happily charges me $2.11 for a moderately-sized cup of bean ash stewed in scalding-hot water. I hop on the loop and head across town to my destination for the evening’s midnight Avacyn Restored prerelease.

11:30 PM EST: I arrive at the Games To Die For parking lot (after only making one wrong turn en route)!

11:48 PM EST: After pregaming with Mitochondrion’s Archaeaeon (demonic invocations to put me in the anti-angel camp for the event) and the previously obtained coffee, I head into the store to meet friends who’ve joined me for many Grand Prix travels: Nick and Andrew (well, and Bobby, who doesn’t ever do anything fun with us).

12:00 AM EST: Our TO cracks the Helvault and distributes one token, one oversized legend, and one spin-down to players, with the oversized card pick based on order of signup. Only Bruna, Light of Alabaster and Griselbrand are left by the time my 40th- or 50th-something place comes up. I take Bruna as Nick promised me his Griselbrand for my token. (Note: Out of 72 players, everyone got a token, but only the first however-many got dice and oversized cards.) 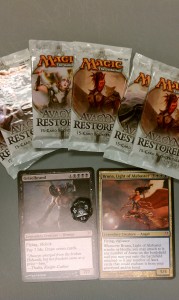 12:10 AM EST: The Tournament Organizer passes out packs and preregistered players not on record (me!) give our DCI numbers to the lady who would be staying up all night after the TO withdraws to rest. We then could sit anywhere in preparation to build our decks (which obviously means next to friends)! I don’t really like this decision, as it promotes cheating among the unscrupulous players, but it does make the prerelease a lot more fun for geeking-out about opens to friends!

12:25ish AM EST: Deck-building time! I cracked my packs and looked at the rares… 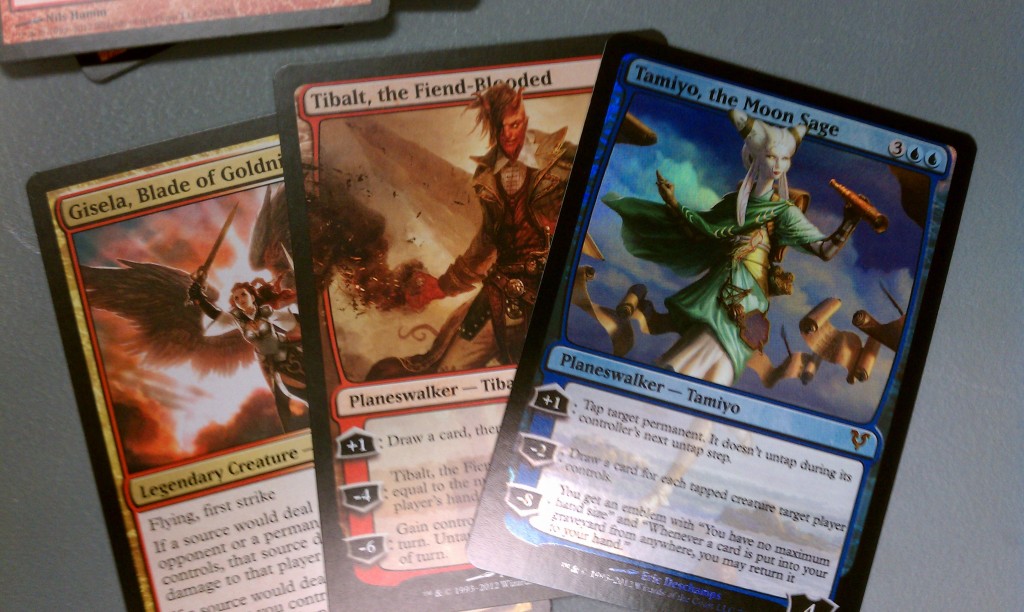 “Not bad” or “mythic madness”? In either case, jackpot! Here’s the full pool:

At first, I thought I might be able to play Gisela and Tamiyo, but blue-white didn’t feel deep enough. I also looked into black with its massive amount of removal and made a black-white deck splashing Gisela. But green seemed pretty deep with the soulbond selection, so this is where I ended up:

Let me tell you, having to manually sort cards and open packs is exhausting.

1:30 AM EST: Round 1. I had to navigate a slight maze of flesh to find my seat. When I sat down, I was greeted by an enthusiastic (and slightly intoxicated) fellow named Hurley. He had played at the shop prior to moving a few hours away and was back to see friends and get Avacyn Restored cards ASAP. Even with 18 mana sources, I had issues hitting my land drops on the draw. Hurley’s red-white aggro deck came out fast with Falkenrath Exterminator and Call to Serve in two games of our three-game match. “Miraculously,” I had Banishing Stroke both tims, but I lost a creature in the match’s deciding game (and lost the match). Game 3, I stumbled on colors and then total lands, and a myriad of 1/1s (including guys like Stonewright and Cathedral Sanctifier), Goldnight Commander and Kruin Striker, pummeled me into oblivion. I tried my black-white-splash-red list after losing Game 1 and did not like the results. It would be green-white-splash-red for the rest of the night! 0-1

2:40 AM EST: Round 2. You’d be surprised how many people left during or after Round 1; the building was easily navigable after the exodus. I played versus Wade this round; the match was over in about 10 minutes. Wade’s deck didn’t respond well to creatures soulbonded with Druids Familiars (something about mana screw). Sadly, my notes don’t indicate what colors he played. I blame sleep deprivation (but it’s probably just ineptitude). Oh well, my notes do denote I had time for a bathroom break after this round! I give the bathroom experience a 3 of 5 star rating. Clean enough, but still felt like a mop sink room with a pisser in it. 1-1

3:30 AM EST: Round 3. Chris mirror match! Chris was playing blue-black and had more than a few blue soulbonders; he actually had all of them. Okay, okay… I never saw Tandem Lookout, but he did play the other five over the course of our two games. Chris seemed a bit tired, as he missed more than a few EOT mills with Stern Mentor pairs. For being blue, he didn’t have many flyers, and my evasion pecked away after his removal had been used up to seal the deal. Deadeye Navigator was pretty annoying to play against, but luckily, other-Chris blocked a 4/4 with it when he was tapped out and I had Joint Assault. As in most of my games, Druids Familiars played a huge role (pairing with Farbog Explorer this time). 2-1

4:32 AM EST: Round 4. Another Chris mirror match! This time, he was even playing green-white (but without my mythical red splash)! Like most green-white Limited mirrors, our games took forever; large ground stalls occurred, and flyers were prime choices for any removal spells drawn. Game 1 featured two Defangs and an Eaten by Spiders from evil Chris (to deal with my Seraph of Dawn and Archangel, even after a Cloudshift saved one). Eventually, evil Chris broke through our stall with twin Howlgeists; that card is a Blitzkrieg of a beating. Game 2 dragged on for just as long with plenty of removal nullifying my large creatures and some flyers to pressure me and(!!!) twin Nearheath Pilgrims. Luckily, my deck coughed up some Geist Trappers and Druids Familiars to stall until Gisela appeared. The Pilgrim was so very obnoxious to play against. He must’ve gained 20+ life off of them! Time was called as we were shuffling up for Game 3, so the night’s most entertaining match ending in a disappointing draw. Sigh. 2-1-1

5:35 AM EST: At a glorious 2-1-1, I claimed my two prize packs and cracked them, hoping for some +1/+1 counter cards to consider for my cube. Vexing Devil stares back at me… not bad, I guess. I also snatched up a Blessings of Nature, Cathars Crusade and some other lesser cards from my friends’ pools and prizes.

5:45 AM EST: After some final words, I made my way back to the car for the 25-or-so minute drive home. Wow, a lot of people get up early on Saturday morning; the roads were quite busy. Kalmah’s For the Revolution kept my energy up long enough for me to make it to my bed and pass out. Wheeee!

All-in-all, the prerelease was a lot more fun than I expected it to be– even with my admittedly average performance (and excluding my pulls)! It was a bit annoying to have such a slow start time (and a whole freakin’ hour for deck-building!), but each round in the event did end up taking only about an hour. Also, I found keeping track of soulbonds to be a bit annoying when more than four creatures were on the battlefield.

I’d be lying if I didn’t say I was looking forward to this more than the paper prere so that I could spam a playlist, so I’ll get it out of the way now. Here’s what’ll be playing in my headphones as I’m rambling about my donkish play decisions and scrubtastic sealed thoughts: The Red Chord’s Clients, The Ocean’s Precambrian, Pig Destroyer’s Phantom Limb, Tomb’s Path of Totality, Assuck’s Misery Index. Metuuuuuuuul (mostly)!

Anyway, I hope you enjoy my overpriced experience as much as I am sure to enjoy it!

Whoa, that was quick (to film) and slow (to wait through the rounds). Soulbond seemed a bit strong (and miracle a bit random)…

Well, things were definitely different in the two events. It’s hard to say which was an overall “better” experience, but I am leaning toward the paper prerelease for it feeling fun (and the crap rares feeling slightly more exciting to obtain for cubing purposes). I’ll go through the pros and cons of each event before passing “final” judgment for this comparison (which I probably had a little bias for from the onset).

Paper Event. Cons (first, because that’s how I think!): Traveling sucks, especially when tired. People can be pretty loud. I didn’t read the soulbond FAQ (or the reminder text, apparently) for comprehension and definitely misused this ability (as did my opponents). Miracle in person is awkward when you’re not expecting it. Record-keeping is hard. Miscommunication creates awkward moments. Can’t listen to music while playing. Pros: Everyone I interacted with (including my own surly friends) were in a good mood and polite! The Helvault promotion was cute and exciting (even though a friend spoiled its contents to me)– I would’ve lost bowel control if we had one of the premium ‘vaults! (So cool.) The cards feel valuable in paper for me and my modest cube-based collection. Easier to turn cards opened into dollars to offset the entry cost if desired.

Digital Event. Cons: No real human interaction (possibly a pro? meh, wasn’t as fun as kind human interaction). EV feels lower due to non-chase cards being worth so little. Left a small impression for non-gameplay events. Miracles were awkward to play. Pros (surprisingly, interface-related): Magic Online forces both players to play the game with the correct rules. Deckbuilding is quick and offers myriad handy options. Event allows for multitasking. Can play without pants and not risk indecent exposure laws. Can drink and eat (and drink) while playing.

So how did they size up to each other? Well, you watched the videos (hell, you might not even have read *this*, but I’m betting you’ve watched)! The MTGO event was a bit lackluster. It may have been the lack of a first round, a soulbonded batch of beatings or the (comparatively) bad value opening, but I would’ve preferred to have twice as many paper prereleases this go-around! Trust me, I am shocked, too; I expected to enjoy the digital realm much more. Turns out digital is better for a clean, competitive game but not for enjoyment from non-competitive factors. Paper was just freakin’ fun.

Thanks for reading and watching!
Chris