For those of you that don’t know him, Joe Spanier is a Magic: The Gathering Online aficionado (and soon-to-be U.S. WMC competitor) that plays and tweets under the pseudonym FoundOmega. Without his innumerable, tweeted pictures of triple Dragon’s Maze draft decks and board states, I would’ve probably skipped playing during this Prerelease Event cycle. Look at these masterpieces: 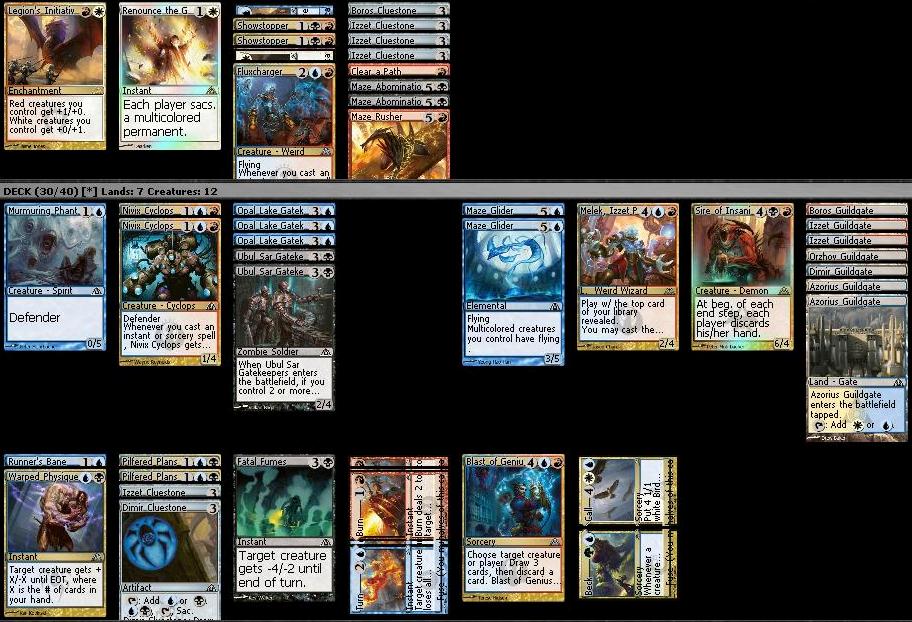 Luckily for everyone who wants to see manabase art, Joe’s strategy motivated me to fire up Magic Online and record a Swiss draft! Before we get to the videos, let me explain what the FoundOmega Triple Dragon’s Maze Draft Strategy (pending trademark) consists of:

Okay, maybe it’s a little more complicated than that, but a “mess” is the desired outcome! The strategy is a pick-order-based one; guildgates must be highly prioritized. The basic logic is to pick cards in the following order:

Most of my decks were base blue-black-green or blue-black-red, but I could see an aggressive base white-green-red (with Zhur-Taa Druids) or base black-white-blue (with Tithe Drinkers as Joe drafted) if they come around later.

The ability to audible into a three-color (or three-color with a splash) deck in the third pack is not a position to take lightly; set up your picks to stay mostly in a color triad if you haven’t secured a 3-5 gates in the first pack (or be prepared to pick gates over cards higher up on the pick order). A realized deck of this plan should have 7+ gates (of 17 lands), 4 bombs/large finishers, 3+ good gatekeepers (weighted toward blue ones), 5+ removal spells, 2-3 cluestones and a very top-heavy curve. You should adjust your pick order as needed to acquire the suggested composition or to shift away from it in the second pack (depending on your current gate count and color mix).

The Draft and Rounds

Warning: The videos don’t do this strategy justice (mostly because I made them), although, the games were quite exciting to play…