As you might expect from last week’s article, I love me some Pauper. But unfortunately, this specialty format does not come with any kind of 8-man, meaning that we enthusiasts are usually constrained to waiting in the 2-man queue. Yet what can we do with these M11 packs we win? Cracking them is a recipe for disaster, and selling them is boring and barely productive. So when I found myself with three spare M11 packs I decided to have some fun and hop into a draft. When I got to the draft room, there were even seven people waiting for me in the 8-4 queue. Is that fate, or what? While I waited for the first pack to load, I quickly rehashed my personal rules of Magic 2011 drafting:

3. Only go green if you can get multiple ramp or mana fix spells like Sylvan Ranger, Llanowar Elves and Cultivate.

Mulling these options over in my mind, I look at the first pack and see…

You can see how the rest of the draft went here:

I ended up building a very strong UG deck. Frost Titan and Overwhelming Stampede are two cards that will almost win you the game out right. And along with my Foresee and Scroll Thief, as well as ramp cards to thin my deck and Aether Adept+fatties to stall, I thought this deck would be an easy 3-0 almost every time.

Round 1 vs. UBR Act of Treason.dec

This seemed to be a variation on the fringe archetype of BR Act of Treason, with multiple Acts, Bloodthrone Vampires, and Viscera Seers.

Game 1, I sat up an early defense with some Sylvan Rangers and a Scroll Thief, which he played a Quag Sickness on. I was able to Aether Adept his blocker, and then Giant Growth the Scroll Thief, but I only drew into an extra land. After he had two Acts for my Giant Spider and Scroll Thief, and then sacced them to his Bloodthrone, the board developed into a stall, with him beating with a Cloud Elemental, while my Phantom Beast, Runeclaw Bear, and Sylvan Ranger held back his ground team. He played his last card in hand, a Barony Vampire, so I knew it was safe to Overwhelming Stampede for the win. 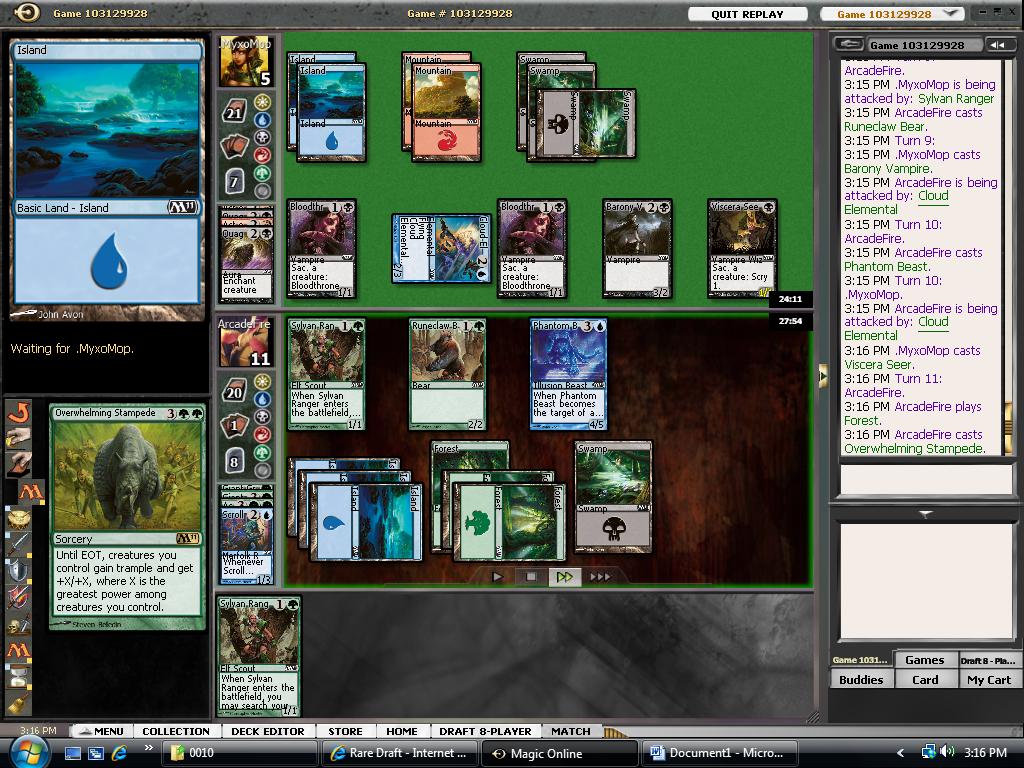 Game 2 was unfortunate for him, as he was stuck on 1, then 2 lands for a very long time, letting me play out two Gargoyle Sentinels and an Aether Adept as defense. Though he was able to kill the Adept and Quag Sickness one of the Gargoyles, 8 mana meant an activation of the remaining Gargoyle plus Stampede dealt an exactly lethal 6 damage. 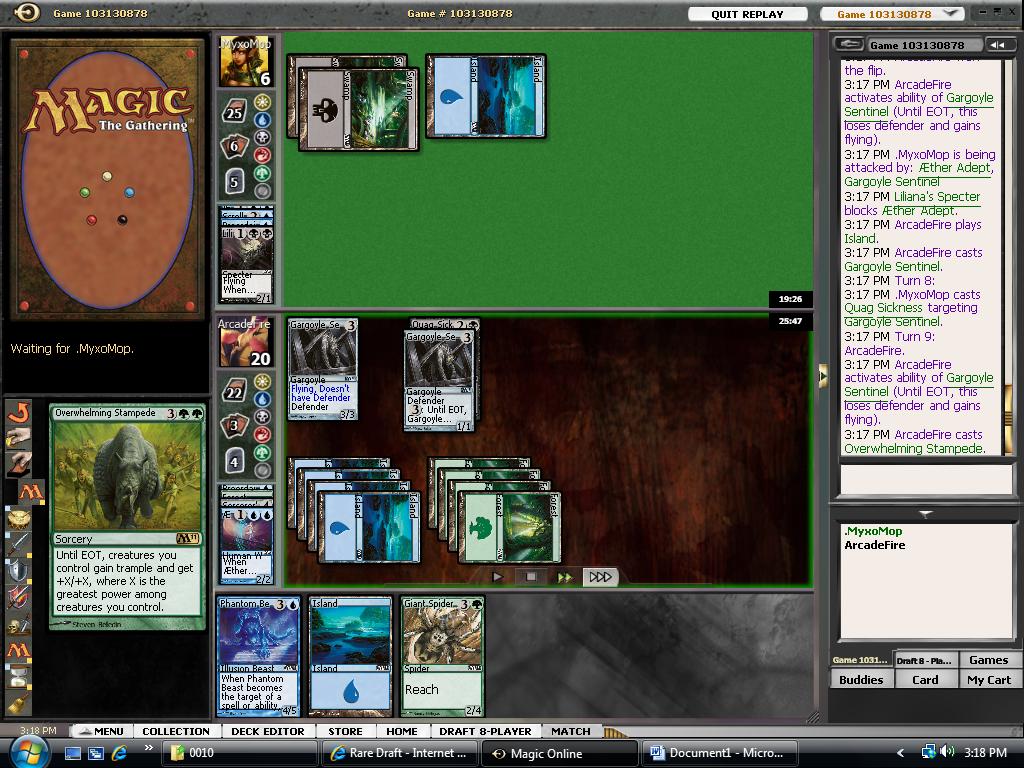 He was playing a slower version of UW, without very many aggressive fliers.

Game 1, he had a slow but powerful start with a Foresee, Infantry Veteran, and Water Servant. I was able to start racing him effectively with a Giant Spider and a Spined Wurm, especially I bounced the Servant for a turn with Aether Adept, then traded a Giant Growth, and my Adept for his Servant, leaving him with no offense. Stampede brought it home. 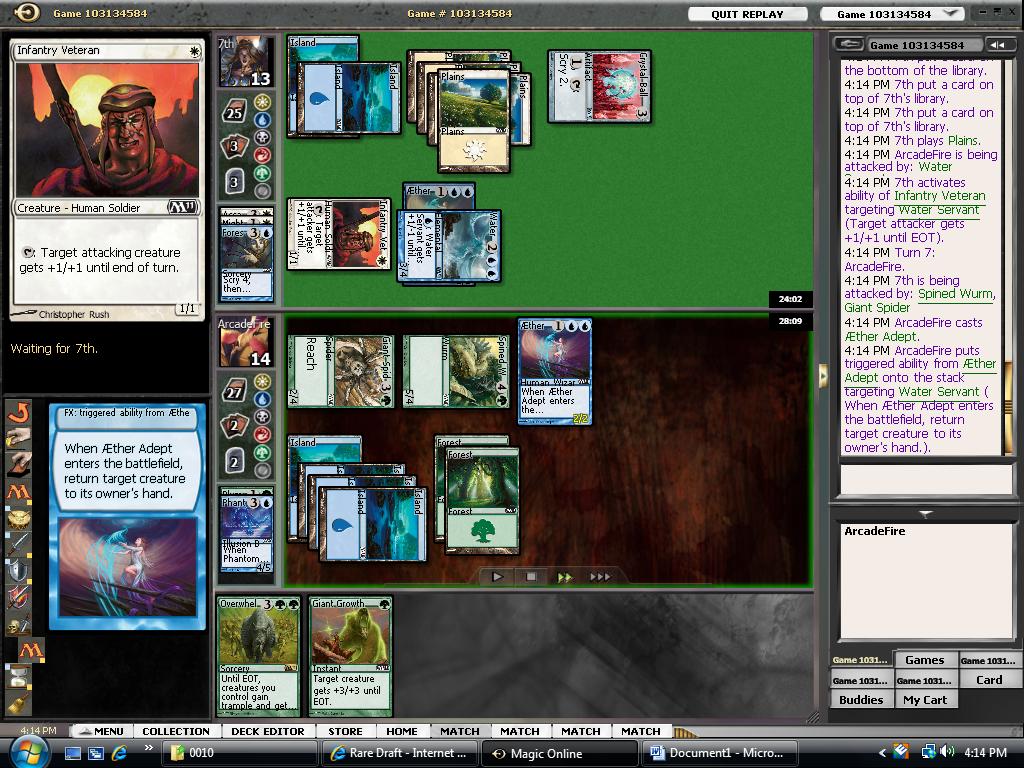 Game 2, he got out of the gates with a much better start. His Blinding Mage severely slowed me down, though I was able to get a two-for-one by Acidic Slime-ing his Juggernaut. I stuck a Frost Titan to tap down the Mage, but he had a Sleep and hit me for 4 with a Siege Mastodon and Augury Owl (putting me dead the next turn even through a blocker). Thankfully, I ripped a Doom Blade for the Mastodon, then Stampeded for the win when my guys untapped. 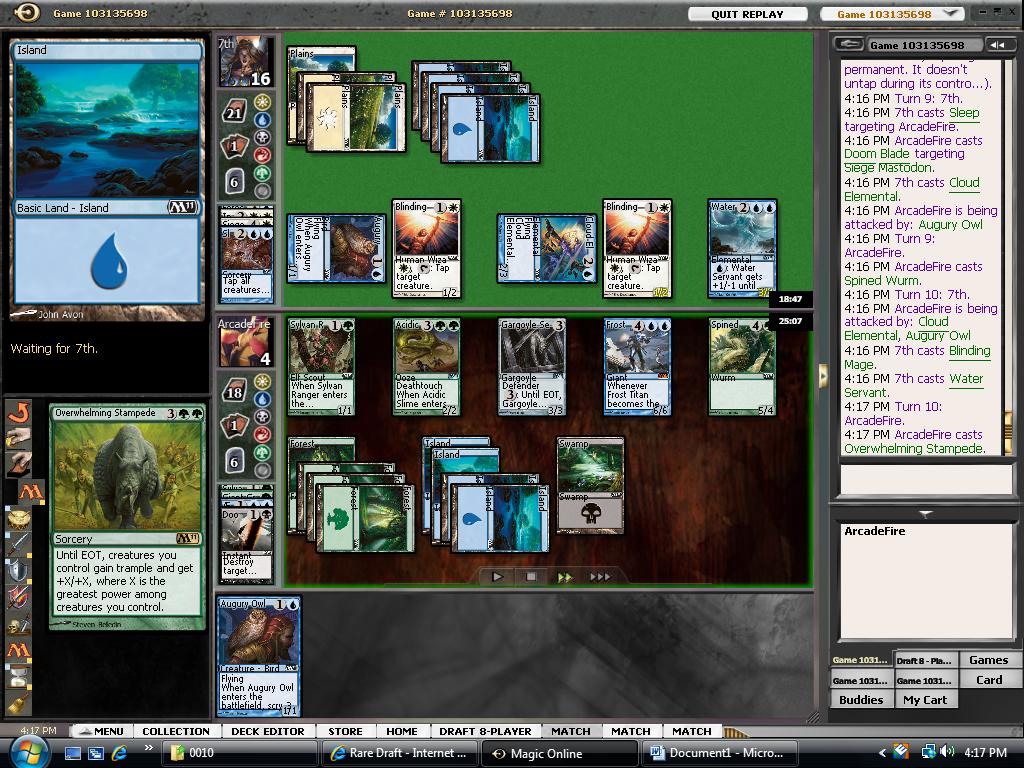 My opponent “no sir”-ed me on the split, so we played it out for the 8 packs. He had a slow put powerful GR deck with multiple Garruks Packleaders and plenty of big guys to trigger them, so my goal would be to set up a wall of countermagic early, and tempo him out with Aether Adept, Scroll Thief, and cheap fliers.

While the replay for Game 1 was lost, I recall him getting to 5 mana early, with a Turn 3 Cultivate, then Packleader on Turn 4, followed by two more 4 power men. I was quickly out powered.

I sideboarded the Flashfreeze that I had picked up in the draft, which served me well in the next games.

In Game 2, I had Sylvan Ranger into Scroll Thief, which he stopped with a Garruks Companion. Giant Spider kept the Companion on defense, which gave him an opening to drop a Cudgel Troll. My Flashfreeze stopped his Turn 5 Packleader, then Frost Titan came down, quickly dominating the board, and he never drew anything to stop it. 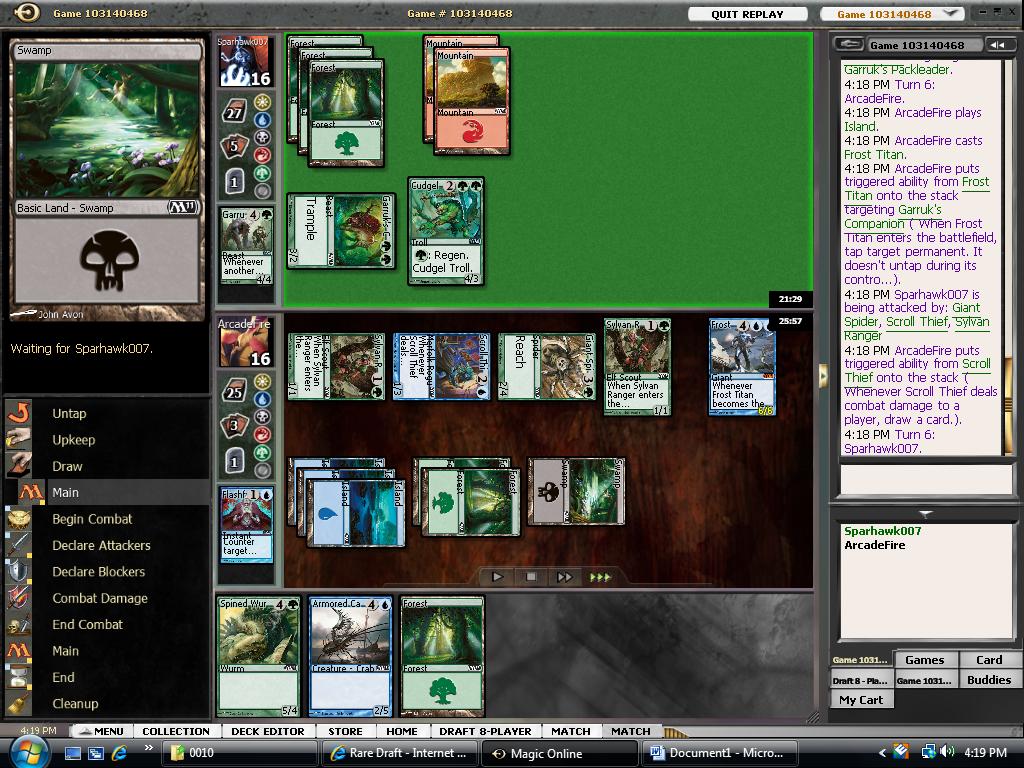 It all came down to Game 3. We started by trading cards one-for-one early, my countermagic for his creatures, which gave me enough time to play a Frost Titan. He played a Duskdale Wurm and swung into my Titan with a 3/3. Fearing a Giant Growth, I declined to block, then bounced his Wurm with an Aether Adept. Frostie kept his random 4/3 tapped down, and I played a Giant Spider post combat. The Spider blocked his Canyon Minotaur on the next attack, and he did indeed have a Giant Growth to kill the Spider. He then played an Ancient Hellkite, threatening to take the game on the next turn. I remained calm, played an Overwhelming Stampede, tapped the Hellkite on my attack, and hit for exactsies. 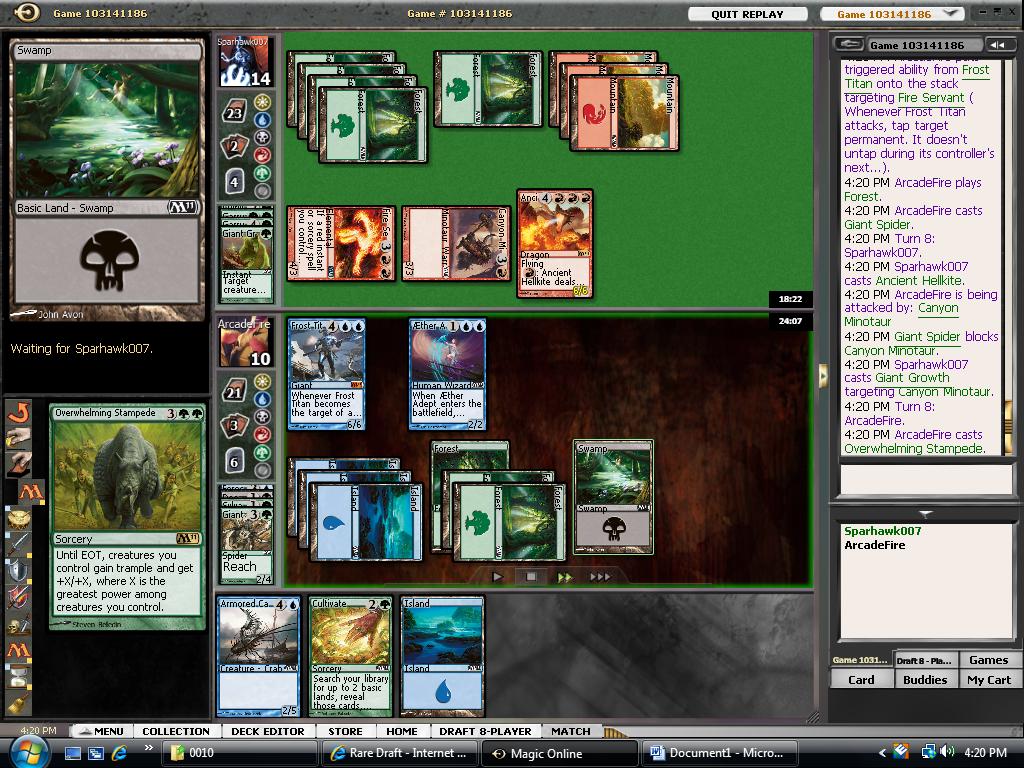 So that was a fairly easy 3-0, though admittedly powered through courtesy of drawing at least one of my bombs every game. But I hope that it still shows how powerful Blue is when compared to the other colors.

For your enjoyment, here’s a bonus draft, but no report, from my second M11 draft which I did the day after:

I started in blue again after the first pick Air Servant, which I think is always correct over the Lightning Bolt, and ended up UG again with an interesting splash for double Pacifism, which I got Picks 2 and 3 out of Pack 2. I got to the finals again, but split there, and I literally won all 4 of the previous game through setting up defense with random 2 power dudes, an Air Servant, and a Phantom Beast, and then casting Sleep for the win- every game. Yeah, it’s nice. But thus, I have discovered the secret of going infinite on Modo: draft M11. This works when you think about it logically too. All the most skilled players are preparing to win their PTQ, and so they draft Scars in order to get practice for the format. This means that the only people in the M11 queues are those with no interest in PTQing, meaning they are on average worse (I would also point out that the only formats that award Magic 2011 packs as prizes are the specialty and older formats, whose players are on average less competitive than the Standard players winning Scars packs every week). And in my experience, blue is almost always open, leading to some great decks, and great records. Give it a try, and let me know how it goes for you!