This is not a strategy article. This is an article in economics. Specifically, this is an article about Wizards’ recent change in the price of set redemption from $5 to $25. In my opinion, this is the most significant change Wizards has made to the MODO economy in at least 5 years.

For those of you not familiar with set redemption, it is a policy of Wizards that, if you complete a virtual set of cards (e.g. Gatecrash, or Innistrad), you can exchange that virtual set for a physical set. Availability of these sets is specified by Wizards and published in a table: 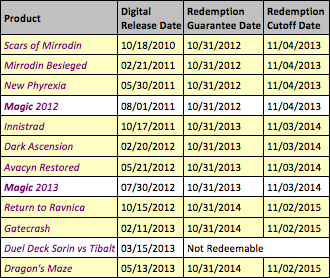 As you can see, redemption guarantee and cutoff dates are batched by year, defined by core set release. Scars Block and M12 are available through 11/04/2013.

Innistrad Block and M13 are available through 11/03/2014. Return to Ravnica Block (and M14, presumably) are available through 11/02/2015. In my opinion, these are reasonable time frames. This is long enough for sets to cycle out of Standard, which is a natural line to draw. Wizards originally included this feature to boost confidence in early MODO. With pack prices the same online and in real life, players needed reassurance that they were not simply throwing away money on worthless virtual product. This was a legitimate concern of players and an effective solution by Wizards. The idea was that connecting the virtual and physical markets would prevent virtual card prices from being too low to motivate online activity. If a physical set is worth $150, and a virtual set is only worth $50, then people will buy virtual sets, redeem them, and sell them as physical sets. This causes the price of virtual sets (and individual virtual cards) to rise, in part because redemption causes virtual cards to disappear from the system, thus decreasing the virtual supply. Ideally, this causes the markets to equalize in price, although they will remain separated by the value of the effort it takes to redeem and sell sets.

This feature was originally free in the US, except for a $3-per-shipment fee. At some point in the mid 2000s, however, Wizards introduced a $5-per-set redemption fee. This caused a stir because it seemed to go against Wizards’ guarantee to uphold the value of virtual sets. A $5 fee cut directly into profits from redeeming and selling sets, thereby separating the virtual and physical prices. Imagine, for example, that set redemption cost $500. No one would redeem sets because that costs more than a physical set on the secondary market. $5 is not the same as $500, but it had an impact, if only on players’ perceptions of being treated fairly by Wizards.

Being an avid MODO limited player, I often found myself with many sets. In particular, this was fueled by my love of sealed. Until recently, the best-value MODO events were the Sealed swiss queues that occur during the two-week release period after a new set has become available online. These 4-round, 6-pack, 16-player queues cost 24 tix and pay out 13 packs for 4-0, 8 packs for 3-1, and 3 packs for 2-2. In addition, you get to open 6 packs:

It is easy to see how this can turn into profit through redemption. Grinding this many queues provides as many commons and uncommons as you could ever want. Moreover, it provides a large number of rares and mythics, and often enough foils that it is fairly easy to finish a foil set. Until Wizards increased the price of set redemption from $5 to $25, this was the most effective way to pull winnings out of the system. This method turned tix into cash at a rate of about $1.15 per ticket. The alternative is to sell tix for money on paypal, which gets around $.95 per ticket.

Wizards, however, noticed the leak and decided to plug it. Their first attempt was several years ago, when they revised the structure of their Sealed swiss queues. These queues used to be even more profitable, when you could use 6 packs and 4 tix to enter the release Sealed swiss events, which at that time paid out 15 packs for 4-0, 10 packs for 3-1, and 3 packs for 2-2.

It may still make sense to redeem a foil set from time to time, or perhaps to redeem a set or even a playset for personal use, but the business of set redemption as a way to pull winnings out of MODO is over. If redeeming sets added about 20% in value, and sets typically sell for $100-150, then an additional $20 fee per set means that it is no longer worth the effort to redeem sets to sell. You are better off selling tix via Paypal for $.95.

This has several consequences for MODO. With commercial redemption off the table, more cards stay in the system. This increases the supply of virtual cards, which should decrease the price of those cards. This means that all limited play is devalued. Now, the best thing to do with extra rares is sell them as quickly as possible. Moreover, this should also cause the price of packs to decrease because the price of singles plays a large role in pack prices. And when pack prices fall, constructed profitability also falls.

The effect of this change was so drastic that I lost motivation to play the release Sealed swiss queues. I used to play up to 120 per release, but for Gatecrash, it felt as though I was not profiting by playing, or was perhaps even losing money, so I stopped playing those events entirely. Card prices quickly crashed and pack prices were low. In fact, I have barely played limited since this change. Last season I was not qualified for the MOCS, and I will most likely also not be qualified this season.

It is difficult to gauge the full scope of this change’s effects. It may be that the price of tix falls as people who used to sell sets instead begin selling tix. It may be that the price of physical sets rise due to decreased supply. It may be that card prices fall so low that it again makes sense to redeem, even with the $25 fee. It is hard to predict these things without company-level data about the size of set redemptions relative to the total market. Parity between the virtual and physical markets has certainly been damaged, although the extent of that damage is unclear. The one benefit of this change is that, when card prices fall, constructed Magic becomes more accessible because decks are cheaper to build.

One effect I am sure of is that I am no longer a limited MODO grinder. Much as Wizards’ recent changes to the pro club have made it difficult to stay on the Pro Tour, their addition of the numeral 2 in their redemption fee has made profiting from limited grinding nigh impossible. Drafts are still fun from time to time, as are weekend Sealed premiers, but the drop in expected value has considerably reduced my online activity. Whichever consultant came up with the idea of plugging this leak in MODO certainly earned his or her fee.

Currently, it is difficult to profit from MODO. You essentially have to do well grinding constructed Dailies or weekend premiers, or win a big event such as a release championship, PTQ or MOCS. Alternatively, you can own a bot or speculate on card prices. Little by little, Wizards has been finding ways of making MODO more profitable for them, and they just took a large step toward that goal. I fully expect that they will enact other ways to “optimize” their system. Unfortunately, this comes at the expense of players’ profitability and satisfaction.

thegreatdustini
The_Great_Dustini, aka Dustin Faeder, is an attorney and philosopher whose Magic successes include three Pro Tour Top 64 finishes, a 3rd-place finish at GP Toronto, and winning two MTGO PTQs.