A month has come and gone, and I am here to report some good news, some bad news ,and some opinionated rambling packaged as news. 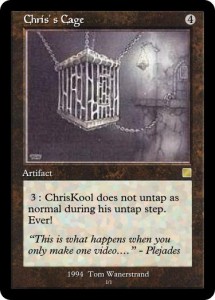 First thing is first (which makes sense- where else would the first thing be):  I messed up a bit this month. (Sorry. Oh…how delightful – you’ve already forgiven me!) You might have noticed that only one video went up this month.  That was not my intention, and next month will be structured to one video per intermediate week. I will detail the new plan of operations in December’s first article – so stay tuned!  (Tuning in frequently will assuredly treat you with much more than my writing too.  December is a big month for MTGO Academy!)

With that out of the way, I can let loose a large sigh of relief. PHEW.  This month’s lists have been rough on me, Goblins and Blue-Green in particular. They’re not my style, and frankly I don’t play well while piloting them. Also, coupled with client lag at the beginning of the month, my general ineptitude with Goblins saw Sledders and Sharpshooters going to the grave without any effect occurring on the table (or as some of you may know it: the battlefield). A huge headache ensued. (I should probably include this in the Goblin wrap-up section, but here is a tip worth remembering: NEVER DOUBLE-CLICK ON GOBLIN SHARPSHOOTER.)

For those of you that have not read this month’s starter article, you can find it: BY CLICKING HERE.

On to the lists (accompanied by those jumbled musings promised prior)!

Ah, Blue-Green- my nemesis. Out of this month’s trio, Con-Troll garnered my worst record by far. I tracked down the deck’s primary designer (check out Lundstrom’s July 8, 2009 list here) to see what I was doing incorrectly and which cards I should play in the main deck and sideboard.

Unfortunately, Lundstrom has been busy during 100 Card events lately (hope you can play more soon, bro!), but he offered the following suggestions that articulate my above list of Blue-Green better than my mere mortal words could ever hope:

My personal experience with Blue-Green has led me to one primary conclusion: PRACTICE if you want to play this deck. If you make a bad decision on whether or not to counter a spell, you can lose the game. (But the loss usually doesn’t occur for several or more turns, making it hard to tell what actually caused the failure.) This deck requires finesse and patience – don’t look to it if your desire is to progress with guns pulled and blazing. (For that outlook you might consider the next deck.)

I had the privilege of chatting with E. Hustle (father of my deck list, see his October 24, 2009 list here) after playing him in the Goblins mirror during a Weekend Premier Event (in which he triumphed against me). The talk proved quite insightful.

Mister Hustle has been playing Goblins since 100 Card Singleton was, well, wasn’t 100 cards. One might call him an expert on Singleton Goblins. He was not a fan of Goblin Taskmaster, too many non-Red lands, or worrying about White enchantments; all of which synchronized with my testing. Taskmaster’s benefit did not warrant his cost, I had many mana issues (I even added another land), and worrying is for the Blue-based decks! He made sure to mention that Kiki-Jiki, Mirror Breaker is included to “live the dream” of insane Goblin interactions and not for any overly valuable purpose (and thus is a fine inclusion for those with a love of flair).

He also liked the Ranger of Eos idea (which I am playing in place of Tarmogoyf). We discussed sideboarding and he suggested bringing in Death Spark, Pyrokinesis and Manriki-Gusari against creature-based strategies (citing the Manriki as an out versus Goblins iron executioner, Sword of Fire and Ice, and a general enhancement that allows creatures to win any brawls they may find themselves in).

In addition to sideboarding, E. Hustle suggested choosing to play last (as he does) in the mirror and against RDW to get an extra card to win the attrition war.

Against Control decks, he said that a Goblins player should take out the anti-Creature oriented cards (like Lash Out and Sparksmith) in favor of mana denial and Pyroblast. My list supplements E. Hustle’s with Ankh of Mishra in the board against Control and generally slower opponents; I tried it main but moved it to the board amiss this sea of Red heavy Aggro in which we sail. I rounded out the anti-Control/Combo package with Manabarbs and Aven Mindcensor. These two cards haven’t been tested and are replacing a clunky Disenchant effect for at least the time being.

In my testing, I tried cutting Arc-Slogger but found myself completely outclassed in Aggro matches; if I couldn’t win a quick all-in, I couldn’t win. So in a humbling fashion, I added back Big Slogs, the Sword of Fire and Ice, and Magus of the Scroll. Albeit clunky, these top of the curve cards (don’t be fooled by Magus’s one casting cost- he is very mana intensive) add power to the deck that it needs to seal the deal. (Side note: In a Goblins mirror, E. Hustle beat me when I had Sphere of Law out through the amazing power of SoFI.)

I rounded out the deck with a miser’s Ruination. It should bring the power level of the deck up a bit against non-RDW/Goblins matches and works nicely with the contingent of 20 Snow-Covered Mountains (that easily could be non-Snow-covered). You can thank Snuffleupogus for this inspirational addition.

Unfortunately, my closing opinion of Goblins is close to the opinion I had when I started out: This deck is not desirable for me to play. I didn’t like the lack of options that Goblins represents; its linear strategy often came to a halt with an opponent at approximately 7 life due to a timely Lightning Helix, Wall of Roots or Loxodon Hierarch. I think I understand the deck a bit more, with its slogan being pressure through power (and not necessarily blitzkrieg speed- perhaps the guns are pulled but only firing at a steady, moderate pace), but it’ll be a cold day in hell before I pilot this deck in another Weekend Challenge. Well, I guess with Goblins that it’d be a warm day.

(It should be noted that Red-based Aggro, Goblins included, has taken home several high placed Weekend Challenge finishes this month (for example, look at this November 28, 2009, Top 8). I am just a bitter, biased man – as can be seen with the declaration of my favorite deck of this month!)

Out of this month’s misguided mÃ©nage Ã  trios, this deck was definitely the pleaser. (Or at least it pleased me – even while losing!) In all seriousness, Reanimator was a lot of fun to play… but it surely wasn’t easy (nor did I actualize the full potential of the deck in many scenarios).

I played the deck in two Weekend Premiers and lost to Red-based Aggro four times. Fireblasts, Banefires, Goblin Lackeys, Moons and Stone Rain effects wrecked me throughout both events. The long arm of burn coupled with Reanimator’s lack of early plays made for a lot of uphill battles.

You can watch a video of me playing against Goblins with an older incarnation of Reanimator: by clicking here.

Beyond the Red weakness, my other ending observations were thus:

In addition to the above, I also found that knowing what reanimation target was an important skill. Here are the creatures (in a list that is by no means is exhaustive) that I tutor for in specific scenarios:

The other creatures are not really targets for Buried Alive or Entomb, although they certainly are not out of the question if a situation arises. Also, I will occasionally Entomb for Dread Return (emergency reanimation) or Deep Analysis/Mystical Teachings (versus Control mostly).

Remember how I harked about how fun I thought this deck was? It has so many decisions: what mana to get with fetch lands or land cyclers, what to pitch to a dump spell, what creature to reanimate, when to chump with a looter, what order to hard cast your fatties, when to cast a dump spell (sometimes you don’t have enough chaff to pitch), how to sideboard (almost every card feels integral), and the list goes on. Read so many trolls’s primer (click here to do so!) on the list to gain even more insight into these intricacies.

Hope you enjoyed the pilot month of Testing: One, Two, Three. I am looking for some feedback (comments below or via chris.MTGOacademy@gmail.com) regarding next month’s offering. I’ve already chosen three decks that look like fun, but any requests for how information is displayed or areas of improvement are appreciated.

On another note, I spoke with el_fake (a Weekend Challenge warrior of many formats) about a possible WotC restructuring of the Weekend Challenges. El_fake spoke with Mike Gills at Worlds about the times of our events, and Mr. Gills mentioned switching the timeslots to be: one on Friday night, both of the current Saturday slots and at a different time on Sunday. The goal is to make things friendlier for time zones other than the main US ones. So keep your eyes open for this (hopefully) forthcoming good news!