In my last article I discussed how building a deck around redundant cards can help you circumnavigate the inherit randomness of 100 Card Singleton. This time I’ll be tossing my playbook into the gale and shouting, ABANDON SHIP! Rather than adhering to a single, fine-tuned strategy, let’s go the greedy route and focus on sheer and irrefutable power.

This idea has been kicking up dust in the floorboards of my brain for some time now: a deck comprised of the very best of the best. I threw a haphazard list together for a test drive, not quite sure what to expect, but was I ever so pleased by the outcome. 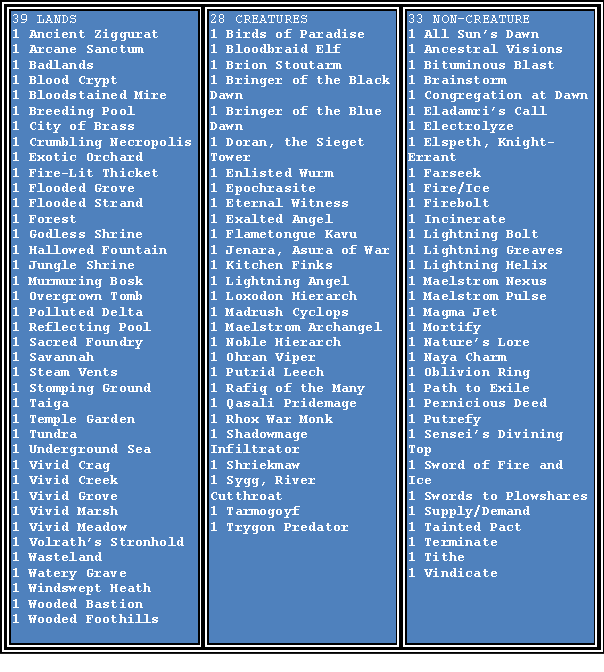 Of course, all power comes at a cost. In this case, it’s the reliability and speed of your mana.

At first glance, you may question why I am only playing four mana accelerators in a deck with a curve that starts at three and has its real strength beyond. The answer: I didn’t want to draw and/or Cascade into them later in the game, diluting the deck with cards that are only useful in the beginning. Acceleration isn’t as much of a concern as reliability. And with a compliment of every available dual, fetch, vivid, and tri-land, that’s not much of an issue either… The real problem is how many of these lands come into play tapped.

I initially had Krosan Verge, but found that the turn to activate it made the deck even slower. Any color was better than none. And, as I mentioned, turn three was where the party started. So I added a Basic Forest in its place. This was another measure toward cutting down the “come into play tapped” factor, and is helpful against the ever-popular Path To Exile.

Other than City Of Brass, Exotic Orchard, and Reflecting Pool, the rest of the mana took some tweaking. After some number crunching I decided that Flooded Grove, Fire-Lit Thicket, and Wooded Bastion were my best options. These three specific filter lands may initially strike you as seemingly arbitrary, but they have yet to disappoint me. They not only provide your core colors, but they smooth out the mana to hit the two Bringers and the Maelstrom Archangel and Nexus on curve. Ancient Ziggurat does this as well, with nominal impact since most of your non-creature spells cost three or less.

Despite being colorless, I couldn’t bring myself to take out Wasteland and Volrath’s Stronghold. They’re just too damned good, especially when you’re playing obscenely powerful men.

It’s important at this juncture that I remind you this is not a Domain deck. Cards that require one of every mana are not the same as cards that require land types in play. In the original build I played both Tribal Flames and Global Ruin, but neither were ever cast to their potential, often leaving me with less lands or damage than needed. Remember, the concept here is power, not theme.

I also tried to keep all double mana costs to a bare minimum, as it is easier to play two different colors usually than two of the same. There are five cards in total that have double mana symbols, all of which are strong enough to have a home in the deck.

Next I had to decide which men, exactly, would be worthy of inclusion. This was actually a lot harder than I anticipated. I had to reconcile what made a creature “good.” There was a multitude of options, and a lot of the creatures I thought were up to snuff ended up on the cutting room floor.

For instance, Etched Oracle. First off, he’s essentially a five-cast. Of course his ability is exceptional, but with Cascade as such a prevalent and dependable element of the deck, he’s a liability – I actually lost a match in the last Premiere Event when I cast Bituminous Blast into this guy, which subsequently cost me a place in the Top 8. He’s just not as good as the blue and black Bringers or Maelstrom Archangel as a five drop.

Sedraxis Specter was another to fall prey to quality control. With green and white being the heaviest colors in the deck, he felt like a stretch for a marginal benefit. Same with Sprouting Thrinax and Woolly Thoctar; they just didn’t do enough. Wild Nacatl, Kird Ape, and Watchwolf were never even in contention. Even Anurid Brushhopper proved to be something of a disappointment in the end. I wanted each and every threat to be enough to send my opponent scrambling for a solution, not a slew of big, fast dorks with eight lines of flavor text.

Zur the Enchanter was most definitely the hardest edit. I was very conscious of including creatures with a higher-toughness-to-power ratio because of Doran. The problem with Zur is you need to play a decent amount of support cards to make his ability worthwhile, most of which are best suited for a deck that revolves heavily around him. He couldn’t function as an afterthought in this deck, especially with only two cards for him to fetch. So out he went.

Then there’s the curve to consider. There’s a glut of amazing creatures in the three slot of the deck, but surprisingly not so many two drops. Turns one and two are best and usually used for getting down your vivid and Alara tri-lands.

Tarmogoyf and Quasali Pridemage were obvious inclusions. I toiled over Putrid Leech for a good long while, thinking him another proud member of the aforementioned aggressors-with-no-abilities. But he works a lot like Tarmogoyf: a cheap, obscene threat against control, and a formidable defender against aggressive decks.

Sygg is another card that really surprised me. I can’t count the times I’ve played Congregation At Dawn for Enlisted Wurm,

Bloodbraid Elf, and Sygg as the final target. Doran turns him into a two-mana card-drawing threat. And with the amount of cheap burn, it’s possible to even draw cards EOT on your opponent’s turn.

Epochrasite has also fallen into my recent good graces. I have to be honest with you. I was never been very impressed by this card. His ability seemed like some sort of weird Phasing; while he’s taking a breather in limbo – a necessary evil to get him past his initial inferior stats – you’re more than likely getting the holy hell beaten out of you. But he’s too good with Cascade to ignore. Beyond that, he buys you the time to stabilize against faster decks. Or he acts as a recurring thorn in a control player’s side.

I especially like that the majority of the deck’s card draw is attached to men. Your hand is always loaded with obscene threats and answers, so you don’t need too much in the way of additional drawing power.

I won’t bother pontificating about the rest of the creatures, as it’s pretty obvious why they’ve been included. Instead, let’s move on to the third part of deck: the removal, deck manipulation, and everything else that doesn’t have legs.

Another prospect that allured me into finally putting this together was the advantage of playing all the best removal cards in a single build. Particularly, I wanted to play Mortify, Putrefy, Vindicate, Maelstrom Pulse, Pernicious Deed, Terminate, Bituminous Blast, Naya Charm, Swords To Plowshares, Path To Exile, and Oblivion Ring.

There wasn’t much burn in the first draft of the deck: just Lightning Bolt, Lightning Helix, and Fire/Ice. Eventually I realized that Firebolt, Incinerate, Magma Jet, and Electrolyze were cheap and efficient enough to warrant inclusion. They gave me some early game against beatdown, and provided some reach against control. Most importantly, I had a better chance of killing Magus Of The Moon and the two Miners, which can easily lock you out of the game entirely.

Next was the deck manipulation. I opted to run a relatively low number of cards that accomplished this since I was more than satisfied every time I drew for my turn with no additional assistance.

Sadly, Fact Or Fiction didn’t make my final list. As strange as this sounds, it provided me with too many cards. And it didn’t fit where I needed to in my curve. Perhaps it will find its way back into the deck, but for now I can honestly say I don’t miss it at all. I chose All Sun’s Dawn in it place, which effectively functions as a tutor for whatever’s been played/killed/discarded/etc.

I’ve cited Congregation At Dawn a few times already in this article, so I’ll refrain from any further encouragement. Eladamri’s Call was the last card that came to mind for creature tutoring. Worldly Tutor is just too slow.

By that same logic, Mystical and Enlightened Tutor also fell short of par, as did Mystical Teachings – by virtue of cost alone. I ended up cutting Glittering Wish as well, as it felt like a mulligan in my opening hand game one.

Since you have zero duplicate cards in your deck, Tainted Pact is by far superior. Getting what you want when you want it at instant speed for a mere two mana is better than reasonable. Exiling unwanted lands and non-critical spells make Pact’s single drawback an actual bonus.

The last search spell is a personal favorite: Supply/Demand. With the vast majority of your spells being multi-colored, this gives you access to pretty much anything and everything you have. The other half of the card is no slouch either. I’ve made babies to push through for those final points late game on a few occasions. But primarily it can find you…

Wipe that scowl of disbelief off your face. This is quite frankly the single most powerful card in the entire deck. Cascade is just plain unfair. Why wouldn’t you want to play TWO of your ridiculously powerful cards for the mere price of one? And when you play this in tandem with another Cascade card… I mean, c’mon! It’s far from a pipedream, friend. I aggressively search it out whenever an opportunity presents itself.

Sword Of Fire And Ice and Lightning Greaves are self-explanatory. After some testing, Sword Of Light And Shadow fell by the wayside. I often side the equipment out against faster decks anyway.

My next article will actually be on the subject of sideboarding so I will leave the one I’m using for this deck a mystery until then.

For now I will just say, “stay tuned,” desperately hoping you pick up on the double entendre.