Tangle Wire and Gifts Ungiven have finally been fixed, and we can start to play real Vintage on MTGO again! It was hard to really look at the metagame and gather any concrete data though the end of July and into the first few days of August when such an important deck like Workshop had one of its key cards neutered. Now that those cards are fixed, how has the format shaken out?

I wanted to take a look at the results from the DEs that were posted to the mothership in the time since Wire and Gifts were fixed. To increase the sample size a little bit, I included the events from the weekend before the update. It is only a small sample of the total metagame since only the largest event that fires each day gets posted. The 1-2 smaller events (depending on how many fired and which day of week it was) don’t get posted. Nonetheless, there is still information to be extrapolated to form some observations about how the format is shaping up. This can be used to one’s advantage when building a deck or choosing which one to play.

The other complicating factor is that DEs are an imperfect barometer for success. Vintage is a format with a high amount of variance due to how powerful the cards are. Each deck will also likely have 1 or 2 other decks that are incredibly difficult, if not altogether impossible, to beat. Thus, getting to 3-1 or 4-0 a deck can feel more akin to dodging bullets than it is to dominating. This is why longer Vintage tournaments are much more conducive to finding “the best deck” or which decks are the most powerful. The lack of P’s moving forward is a concern that I’ll get to at the end.

Of the decks that went 4-0 across 12 events reported from August 2 – August 16, I wanted to investigate how often a deck finished in the money, and also how successful they were (i.e., how many times did they 4-0 the event?). To do this, I created a point system to weight the results. Any deck that went 4-0 in a DE got 3 points, whereas decks that went 3-1 in a DE received 1 point. It might not be the perfect way to evaluate this small sample size, but it seems to be a decent way to “reward” a deck for going 4-0, but also not losing track of those decks that showed up often at 3-1. Without further ado, here are the results: 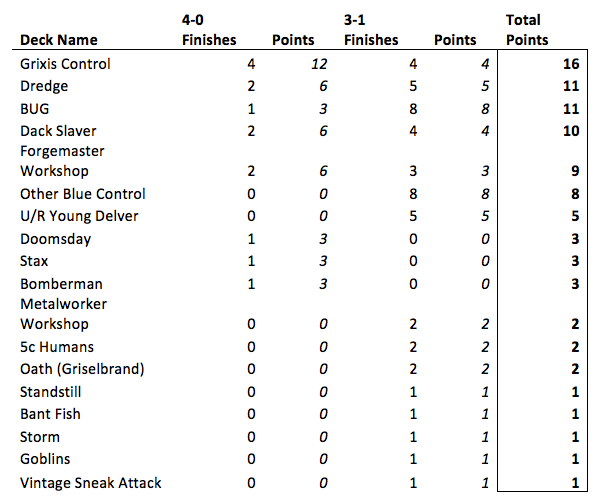 There are a few clear “winners” when it comes to success. Grixis Control led the way with 16 points thanks to the (4) 4-0 finishes as well as another (4) 3-1 finishes. Grixis Control decks have a nice balance of permission, card draw, tutoring, and win conditions, making the deck quite flexible to build. Here is a good representative example of a Grixis Control deck:

Dredge finished tied for second in this exercise with (2) 4-0 finishes and (4) 3-1 finishes. It appears that despite the difficulty in playing Dredge on V4 thanks to the inability to enlarge the graveyard is not deterring people from playing the deck. It is by far the cheapest Vintage deck to build on MTGO, which probably says more about the deck than how difficult it is to play on V4. Nonetheless, Vintage players cannot ignore it if they hope to have success in DEs. Here is a typical Dredge build:

BUG decks were tied with Grixis Control for the most total placements over this period, though just a tick behind with only (2) 4-0 finishes. Either way, the deck is just as popular, and for good reason. BUG decks can be played as very efficient “Fish” style decks. There are usually 13-15 creatures with permission and removal to deal with almost all threats. To me, the deck features Abrupt Decay as a card that is really powerful in Vintage due to the fact that it can’t be countered and it hits a very high density of cards. The creature package is where the deck really grinds players out as Dark Confidant preys on other “Jace” decks that have been popular lately, like the Grixis one above and the Dack Slaver decks I’ll get to shortly. Here is a great example of the BUG deck:

The Vintage community has started to rally around the “new kid on the block,” which is really just the evolution of the Control Slaver builds in the mid-2000s. The printing of Dack Fayden has breathed new life into the deck for the first time since Thirst for Knowledge was restricted. Rich Shay has seen a little success online as his Dack Slaver decks found their way into the public lists on a few occasions. My personal impression on the deck is that it’s powerful, but difficult to pick up and play. This is something you’ll need a lot of practice with if you are unfamiliar with it. There is good discussion over on The Mana Drain if you want to learn more about the deck. Here is the latest iteration that Rich Shay has been piloting:

Workshop decks have been underrepresented, in my opinion, even after having Tangle Wire fixed. Part of it may be due to the price of Wasteland scaring people off, but it could also be the sheer amount of hate being thrown at it in the form of maindeck Dack Faydens or multiple sideboard removal such as Ingot Chewer, Ancient Grudge, and/or Nature’s Claim. Still, the best performing Workshop deck remains the Forgemaster builds. Here is a typical example:

Analysis of the Metagame

The 5 decks listed above were the top-performing decks in my analysis. They are probably the top 5 choices if you want to perform well in the DEs too, though there are lots of other options. In total, there were 18 different archetypes that finished in the money, which is quite impressive. This also discounts the slight variances between the decks I lumped into “Other Blue Control”. Some of these lists were Mono-Blue Control featuring Back to Basics, while others were more standard Tezzeret-Time Vault decks.

There is also a heavy slant towards “budget” decks in the middle of the pack. This isn’t to say un-Powered decks, but rather decks that can be competitive without all the Power 9 or decks that don’t have Wasteland or other super expensive cards on MTGO. Delver decks don’t need a full set of Power, while Dredge doesn’t require any Power, blue cards, or dual lands. Surprisingly, there aren’t many Hate Bears decks.

One of the things that did strike me when looking through these lists is that most players only played one type of deck. Perhaps far more important than what deck you play is how familiar you are with the deck. The more games you get in with a deck the more likely you are to understand how to get out of situations or how to set up your own game plan in certain matchups. You are more apt to perform well with a “good” deck that you are experienced with than a “great” deck that you are inexperienced with. In short: Practice, practice, practice!

I know many of you have been waiting for me to post some videos of Vintage. Unfortunately, that is going to have to be held off for another couple of weeks, sorry. School is finally over and I’ll have a lot more time on my hands. The few videos that I’ve been able to record were not up to the high standards that I have to post here.

The fact of the matter, though, is that school wasn’t the only issue preventing me from playing in DEs. Last week, Wizards announced that they would be scrapping Premier Events for all formats after August 20. I’ve written and said a lot about this subject already, so I’m not going to re-hash it here. Hopefully, Wizards is sincere in wanting Vintage to succeed on MTGO and will fix the issue of unbalanced DE prize support for Vintage/Legacy in the very near future. Otherwise, I fear for the ability of the format to survive.