I have a 100 Card Singleton collector’s checklist for you today. My goal: provide aspiring 100CS players with a streamlined list of the cards that see competitive play. This might be interesting for some seasoned players, too, but I’m focused more on newer players with this article.

I figured that my list would be more useful if it was based on actual deck lists rather than just a bunch of cards that seemed good to me. Therefore, I started out by looking at Top 8 deck lists, cataloging each and every 100CS list posted on the Decks of the Week Archive since the start of 2010. I then sorted all of the deck lists into archetypes and classified each archetype as Aggro, Mid-Range, Control, or Combo. That gives us the following picture of the 100CS metagame:

*I made up the “Relevance Index” to tell me which decks are most prolific lately. I could have just looked at the last month or two of Top 8 data, but the 100CS card pool doesn’t change fast enough to completely obsolete decks from 2 months ago. So what I did was fashion an equation that gives partial credit for older Top 8s. I tuned the equation so the value of a Top 8 would be close to 1.00 for the first few weeks and eventually drop off to zero after about 20 weeks. 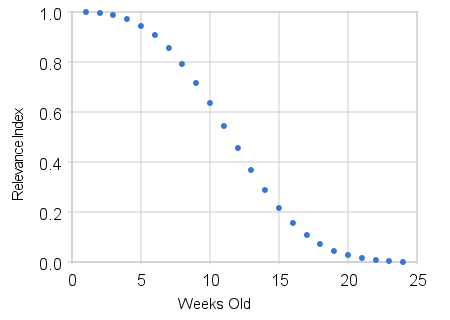 That’s the metagame. Moving on:

But it’s not quite that simple. There are lots of ways to build a RGW Aggro deck, or a Rec-Sur deck, or whatever, and we don’t need to account for all of them. Consider Goblins: about 250 different cards have appeared in Top 8 Goblin decks, but it only takes about 95 cards plus a pile of basic Mountains to actually build the thing. I don’t want a bloated checklist that includes all of the weirdest cards that people have ever tried in tournaments, just the usual build without the chaff. Therefore, all of the deck lists are 100 card lists with 15 card sideboards. Each represents just one version of a deck — hopefully something that is close to the “average” build.

So how did I come up with the deck lists? The goal was to create a consensus / composite deck list for each archetype. If you like reading about competitive decks from the core formats, you’ve likely seen this process before. In each case, the first thing I did was to sort all cards used according to the number of different deck builders who used the card. I automatically included all of the cards that were used most or all of the time. For the rest of the deck slots, I attempted to fill in the deck with cards that 1) seemed like format staples, 2) seemed best for the deck, 3) provided the usual balance of creatures and spells, and 4) gave it a decent mana curve. That was usually a tricky balance, so you should think of those lists as merely a place to start.

The sideboards are most keenly affected by personal preference and one’s particular view of the metagame. If you compare different peoples sideboards for the same decks, you’ll see that they’re all over the place. I tried to balance the same factors listed above while selecting those cards, and I also made sure to include answers to several strategies in each sideboard.

Boiling down the entire 100CS format into 12 deck lists has its caveats. Namely, we leave out a bunch of decks in a format that has at least two dozen viable and semi-viable archetypes. I think that is a fair concession in exchange for keeping the list down to a manageable size and minimizing the chaff. That said, here is a quick nod to some decks that have not had enough recent success to make the cut:

(1) Rock-ish Control Decks: GWB Rock and its 4/5 color cousins have been absent since March. They seem to have been displaced by Rec-Sur and/or Blue-based Control. Or if you prefer to look at it another way, Rec-Sur basically is a Rock deck with more graveyard tricks. Most of the cards for these decks are in the collector’s checklist anyway, and the remaining ones don’t feel like glaring omissions. In any case, these decks are all different enough from each other that it isn’t really the same deck appearing every time, so it would be pretty challenging to make a consensus deck list.
(2) 5-Color Greedy: this might still be a strong deck, but it hasn’t been played in a Top 8 since February. Accordingly, the checklist is missing Maelstrom Nexus and some other cards that the Greedy deck uses.
(3) White Weenie: After a long absence, Vazdru has brought this archetype back for a pair of recent Top 8 finishes. Maybe a few other people will take note of this sub-100-ticket deck and add a few more notches to its record. Until such a time, I will happily avoid the difficult task of deciding which White Weenie creatures deserve to be on a collector’s checklist.
(4) Red-Green Aggro: This might be the fastest, most aggressive deck out there, based on the number of good 1-drop creatures it can run. Last year, there was one Top 8 with three RG Aggro decks, but it hasn’t been a factor lately. I’m curious if this deck is still good and nobody plays it, or if it’s just better to run slower, more powerful creatures.
(5) Blue-Green: This used to be a frequently-seen Top 8 deck, but it has mostly gone away. It occupied a unique spot in the metagame, because it was the most tempo-oriented deck. It runs what looks like an odd mix of cards, but it works. Lundstrom, the person who was always seen playing the deck, switched to UGB, which is more controlling. Slug360 did very recently find the Top 8 playing UG, but he plays lots of decks, so I wouldn’t say that UG is back. I think it’s just so easy to get good mana that people don’t see why they shouldn’t play white or black to get some creature removal and other good stuff from those colors.
(6) Reanimator: part of the design logic behind this pedigreed deck was that it’s good in a metagame that is very light on control. Times have changed since then — we currently have a legitimate control presence, so Reanimator has gone off the radar.
(7) Crosis Control: this is another deck that has been MIA since last year. I think it’s in about the same boat as the Rock Control decks.
(8) Elves: this deck has not made a Top 8 since October 2009, and that seems crazy to me. This deck was reasonably successful last year, and I suspect that it is still decent. I’d love to see somebody put this deck back on the map. I recently tried, but I went 3-2.
(9) Polymorph/Oath/Nestcraft/Thopter-Foundry Combo: Finally we see a dedicated Combo deck in 100CS. The last time that happened was in 2009: Thalai did it with a Storm deck and a Sutured Ghoul deck. Here’s to combo!

The Decks That Matter

This would be an interesting archetype to dissect in more detail, because you can build it anywhere along a spectrum. It can be really fast and aggressive on one hand, or instead it can use a lot of bigger creatures and get more card advantage. You can also focus on land destruction (see Mana De-Naya-l). It depends on which decks you’re really trying to beat. I wasn’t trying to go one way or the other with my consensus build, and I think the data put me somewhere in the middle. If you look at the creatures, it has nine 1-drops and eleven 4- and 5-drops, which suggests a spread-out curve.

Some Goblin decks are Mono-Red, while others splash Green for Tarmogoyf and Tin Street Hooligan. The two are equally popular. Only rarely does somebody splash Black for Dark Confidant and Lorwyn block Goblin stuff. I somewhat arbitrarily went with a Mono-Red version here.

You might have noticed that even though Goblins has a bunch more Top 8s this year than RGW, the latter has a higher Relevance Index. That indicates that the Goblin menace has lost a bit of its steam. I’m not sure that’s good news; as much as I hate the Goblins, they’re easier to hate out of the sideboard than RGW.

For a while, it seemed like RDW was out of style, and Goblins was just better. But lately we’ve seen a mix of both, so choosing anti-Red sideboard cards has been more complicated. To the Red mages, my apologies for being a red hater! Anyway, Red Deck Wins runs more burn spells and fewer creatures than Goblins, though it still includes the best of the Goblins. It trades some of the crappier Goblins for stuff like Blood Knight, Jackal Pup, and Kargan Dragonlord. The consensus list wasn’t very hard to come up with for this archetype, because these decks have been around for a while, and people have pretty much figured out what the best cards are.

I’m a little fascinated by this deck. Having played it a little, I remember being frustrated by its lack of reach and vulnerability to wraths, so the pessimist in me wonders why anybody likes playing it. But it does have a few things going for it: 1) you’re good against Red, 2) wraths aren’t as common as you might think, because they’re bad against a number of decks, 3) you get to steal a lot of games with Armageddon. Those are apart from the fact that it’s just fast.

In case you’re wondering the difference between Dark Bant and a Rock deck with some Blue cards, here it is: Dark Bant runs a bunch of creatures (25-30), and it uses a pretty greedy mana base to help you cast better creatures than your opponent, especially in the 3-drop spot. It’s a pretty aggressive deck, except that it does runs a modest suite of removal and counter magic spells. A Rock + Blue deck, by contrast, will run closer to 20 creatures, and it’s going to have more removal, utility, draw, etc. You can check out Travis’ article about Dark Bant for more info. The consensus Dark Bant list is more skewed toward Blue, because ChrisKool has been tearing it up with his Blue-Heavy list lately. It still runs 29 creatures, including the good 3-drops, so it’s the same basic idea.

Bant and Dark Bant are obviously similar. You lose some pretty powerful Black spells (Mind Twist, Vindicate, Shadowmage Infiltrator, etc), but your mana base is less scary, and you certainly aren’t stuck running any bad cards for lack of decent stuff in Bant colors. I’ve been repeatedly wrecked by non-basic hate with Dark Bant, so I like having all of those basic lands. My consensus deck runs 36 creatures, which might be a little high; the Top 8 lists are anywhere from 30 to 39. The list already has every frequently used non-creature spell, and it’s just easier to fill the last few slots with good creatures than to figure out which of the remaining unused spells are the least weird.