What Is the Planeswalker Format?

The Planeswalker is a format that uses only gold-bordered cards from the Planeswalker Packs available in the Magic Online Store. The Planeswalker format, much like Duels of the Planeswalkers, was designed to give players new to Magic Online (or Magic in general) an affordable experience through Magic‘s past up to its present. The format doesn’t allow sideboards, and it features its own restricted list (cards that may only be included one time in a deck, comprising of mostly legendary creatures, low-cost mass removal and cards with the protection ability) that is listed below in the section “Making Decks for the Planeswalker Format”.

Since the cards are available in the Duels of the Planeswalkers console and computer games, the Planeswalker format is the perfect starting point for people that have mostly experienced Magic : The Gathering through that game. The new Mentor format also works with Planeswalker set cards, so players can take advantage of its special features to better learn (and teach) the intricacies of Magic beyond DotP!

What Comes In Each of the Planeswalker Packs?

Planeswalker Pack 1 contains 490 cards and features some all-stars from the Jund Standard deck from 2010, a playset of the obnoxiously resilient Troll Ascetics, many integral Elf cards, some White Weenie inclusions (including three of the ever-important Glorious Anthem), a few black-friendly cards (such as Royal Assassin, The Rack and Underworld Dreams and tons of great blue card draw spells. Also, included are several strong mass removal spells (Plague Wind, Violent Ultimatum and Wrath of God). With Planeswalker Pack 1, we will be able to build all of the Core Game decks from Duels of the Planeswalkers; click here to see the lists!

The second pack contains 262 cards and introduces a few new ideas to the Planeswalker card pool! Predominantly, Planeswalker Pack 2 features an artifact offering from Shards of Alara block, a tribal creature theme (warriors) and mill cards. With this pack, players can enhance their other Planeswalker decks or build the Cries of Rage, Mind of Void and Relics of Doom decks from the first expansion pack to Duels of the Planeswalkers. The second pack features cards such as Bottle Gnomes, Obsidian Battle-Axe, Platinum Angel and Razormane Masticore.

With this Planeswalker Pack installment, three new decks and many other cards are made available to players whom purchase it. The Eons of Evil deck harnesses the evil insanity of the Grixis shard to bring destruction, horror and dread to its opponents. Heart of Worlds finds its power in the lands that fuel all Magic (and the landfall mechanic). Players can also wield a plethora of damage-dealing spells in the Heat of Battle deck. Notable cards from Planeswalker Pack 3 include Blazing Specter, Evolving Wilds, Goblin Chieftain, Great Sable Stag, Planar Cleansing, Shadowmage Infiltrator and Zombify!

The 309 cards of Planeswalker Pack 4 are comprised of the third and final expansion pack decks to Duels of the Planeswalkers (as well as a small selection of cards to add to all of the previous Pack’s decks). The decks included are the red blue Root of the Firemind, the mono black Master of Shadows, and the mono white Weapons of the Warrior. Some standouts include Absorb, Drove of Elves, Karrthus, Tyrant of Jund, Malakir Bloodwitch, Rampaging Baloths, Tendrils of Corruption and Tinker.

Planeswalker Deck Pack 2012 is based on the Core Game decks of Duels of the Planeswalkers 2012 and contains 635 cards. This large pack comes with recent, new Magic Online accounts and introduces many unavailable cards to the format (along with a whole mess of new ideas to explore)! New elves and goblins and even new tribes (illusions!) appear alongside some standouts from recent Magic history, such as Time Warp, Inferno Titan, Primeval Titan, Puresteel Paladin, Thrun, the Last Troll and Hero of Oxid Ridge. All of the Core Game deck lists are available here.

The newest Planeswalker Pack has 240 cards to supplement the Planeswalker Deck Pack 2012 decks and make three new decks as seen in the first expansion to Duels of the Planeswalkers 2012- Auramancer, Grave Whispers and Cloudburst. The expansion pack has a ton of auras and cards that interact with them, from the faded icon Rancor to the more recent cards Kor Spiritdancer and Mesa Enchantress. There are also some powerful additions from the recent sets’ mythics- Massacre Wurm, Grave Titan, Ob Nixilis, the Fallen and Time Reversal.

Making Decks for the Planeswalker Format

Just like any Magic format, the Planeswalker format has specific themes that shape the decks in it. Should we want to construct our own decks with Planeswalker set cards, there are many ways to go in deck-building; we don’t have to play with only the preconstructed decks that each pack can build! When building a deck for the format, remember these simple rules:

Here are some card pool qualities worth considering for any enterprising deck builder. (If you do not yet know how to build a deck on Magic Online, you can watch this brief tutorial video; make sure the “All Cards (Online)” filter has been switched to “- Planeswalker”.) 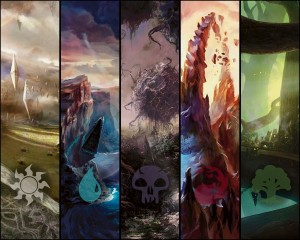 Marginal Mana Fix. The majority of competitive, Constructed Magic formats have quality lands and spells to “fix” a decks mana, to make it easier to cast spells of different colors or with stringent mana requirements. The Planeswalker format has only green cards(Rampant Growth, Cultivate, Explosive Vegetation, Borderland Ranger, etc.), Wanderers Twig, Pilgrims Eye, Terramorphic Expanse and Evolving Wild to ward away mana woes. A lack of high-quality nonbasic lands means that decks won’t be able to reliably cast cards of many colors or many different mana symbols early in a game; decks that want to cast cards like those will have to survive long enough to slowly assemble the correct colors.

Land Types Can Matter. Certain cards key off of the number of a specific basic land type that we have in play. Here are the cards that do so in the Planeswalker Packs: Forest (Howl of the Night Pack, Dungrove Elder, Blanchwood Armor), Island (Flow of Ideas), Mountain (Earth Servant, Spire Barrage, Claws of Valakut, Spitting Earth), Swamp (Nightmare, Corrupt, Tendrils of Corruption). Most decks that run these cards still want to be predominantly one color to maximize their efficiency.

Minor Artifact Theme. There is a small subset of artifact cards that interact with each other in significant ways. Some of these cards have the metalcraft keyword from Scars of Mirrodin block and beg to be used in a deck with a critical mass of artifacts. The others are mostly creatures that play well with other artifacts (Sharding Sphinx, Steel Overseer, Master of Etherium, Mirrorworks, Etherium Sculptor, Sanctum Gargoyle and Glaze Fiend). And, of course, there is Tinker the powerful tutor that places the sought after card straight into play (regardless of mana cost)!

Continuous, Extra Draw Effects. Howling Mine, Font of Mythos and Rites of Flourishing are all available and non-restricted in the format (and Exilir of Immortality is available to refill libraries). In the past, these decks have used Fog and Wrath of God effects to stall the board or bounce(such as Boomerang) and cards like Black Vise or Sudden Impact to kill the opponent quickly.

Combo Cards Not Very Numerous. Cards with unique abilities (such as Howling Mine and friends mentioned above), as well as tutors, are in short supply. Here’s a short, not all-inclusive list of cards that have combo potential for those players interested. Time Warp, Time Reversal, Seismic Assault, Treasure Hunt, Tinker, Mass Polymorph, Polymorph, Shape Anew, Traumatize, Vensers Journal, Furnace of Rath, Elvish Piper, Memory Erosion, Megrim, Zombify, Beacon of Unrest, Kor Spiritdancer, Mesa Enchantress, Three Dreams, Retether, Exilir of Immortality, Totem-Guide Hartebeest and Wheel of Fortune. Combining these cards with each other and others would be a great place for any playing looking to assemble a combo deck to start.

Very Little Land Destruction and Random Discard. Many players loathe the feeling of not being able to put up a fight in a game of Magic more than losing itself. As such, the Planeswalker Packs do not have many cards that destroy land cards or make players unwillingly (aka randomly) discard them. The Planeswalker land destruction cards usually cost a lot of mana- Violent Ultimatum, Wild Swing, the annihilator ability of Eldrazi and Lorthos, the Tidemaker. Cards with random discard are about as few- only Mind Shatter, Nath of the Gilt-Leaf, Hypnotic Specter are available, and the first two are restricted. 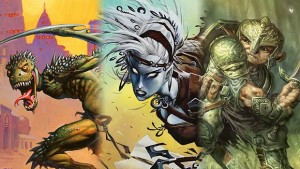 Creatures are a focus. Alternative, non-combat damage win conditions are in short supply. As such, a lot of Planeswalker games will be won through attacking with creatures. In any given game, creatures will meet in combat, pick up pieces of equipment, receive auras or die to removal. All decks must be prepared to face down the probable army of their opposition!

Tribal Interactions. Several popular creature types (or tribes) from Magic‘s history are present in the Planeswalker Packs (coupled with the inclusion of a few lesser tribes). Kor, soldier, goblin, warrior, elf, illusion, vampire and dragon creatures all have cards that interact specifically with their creature type.

Equipment. There are several white creatures that interact positively with equipment or being equipped. Most of them are kor too (and can gain from the kor tribal interaction). Of course, the two standouts are Stoneforge Mystic and Puresteel Paladin, cards that have seen play in Standard Constructed and beyond. And there are also plenty of pieces of equipment to pair with the creatures in our decks.

Auras and Enchantments. With the addition of Planeswalker 2012 Deck Pack Expansion, aura interactions have become more prevalent. As mentioned above, the Auramancer deck has many of these cards in it.

Protection from (Blank) Is Powerful. All protection from (blank) cards are restricted except for Goblin Outlander, Zombie Outlander, Brave the Elements and Etched Champion. This is probably due to the ability not promoting interaction.

Mass Removal Is Powerful. With the focus on creatures to close out games, cards that kill many creatures can often swing things in the favor of those that are casting them. Many of the lower-cost mass removal spells are restricted. This means that the risk for playing multiple creatures out at any given time is greatly diminished (especially if the opponent has already played a mass removal spell).

No Planeswalker Card Types (ironically). None of the powerful planeswalker permanent types are in the Planeswalker format. No Garruk Wildspeaker, no Garruk, Primal Hunter, no Garruk Relentless (Garruk, the Veil-Cursed). Currently, these cards can only be played in non-gold bordered formats.

Here is the fairly lengthy Restricted List for the format:

This format is primarily played in the “New Players” room, but it can also be played in “Anything Goes” or “Casual Decks”. The Planeswalker set is currently used in Phantom Limited events (link has the card pool used for these events) but has also been used once in the past as a competitive Constructed format on MTGO, as a special reward for the 2011 Community Cup team beating Wizards of the Coast!

So How Many Copies of Each Deck Should We Buy?

Of course, the answer to this question varies greatly on what sort of experience we want. For a few years, each new Magic Online account has come with a Planeswalker Pack (Pack 1 originally, now Pack 2012). If we just want to use the Planeswalker format to get a taste of Magic Online, this one pack will suffice. (Reading Plejades’s article In the Beginning: Oh, So Many Choices is necessary if this is your first time using Magic Online. It will cover what to do, step by step, once you’ve purchased and logged into MTGO.)

Following is a list of cards unique to each pack and their quantities; if we want to play more than the listed quantity, we will need to buy additional copies of the pack. (For example, we would have to buy four copies of Planeswalker Pack 3 if we wanted to have 4 Goblin Chieftains.)