Greetings, lovers of all things Limited! It’s time again for me to share a couple of my MTGO adventures; both sad and mildly interesting! How’s that for selling my article? I bet you guys can’t wait to get reading! Today I’m going to show you 2 drafts I did, first one was a 4/3/2/2 and the next was an 8/4. The 8/4 is particularly interesting/amusing/frustrating. But let’s get the sad one out of the way first. Here’s the draft and check out my comments in the viewer and let me know what how you think the draft went in the comments.

And here’s the final build:

I really liked this deck…sadly; me liking my deck and my ability to draw lands are not at all connected. I am on the draw and felt that a hand of 2xMountain, Kiln Fiend, Goblin Tunneler, Enclave Cryptologist, Akoum Boulderfoot, and Crusher was an okay if a bit shaky hand to keep. I felt because I was on the draw, I was okay. I was not. Here’s what Turn 6 looked like. 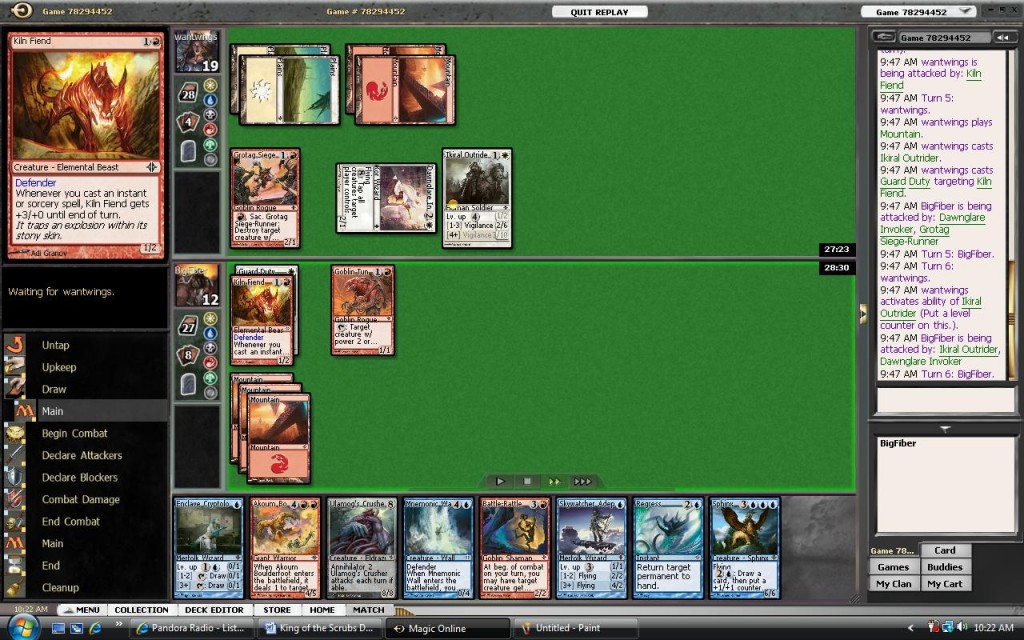 For those of you playing along at home, yes, that is 5 of my 6 blue spells you see in my hand by Turn 6. Boss man Marin says there’s no such thing as luck, good or bad… Hmm.

Game 2 I keep Mountain, 2xIsland, Tunneler, Hatcher, Flame Slash, Sphinx of Magosi. I choose to play first this game probably because I’m on tilt, but this hand is fine. Like a champ, I draw Cryptologist on Turn 3 and level her. Turn 4 I level her twice and this is what the board looks like on Turn 8: 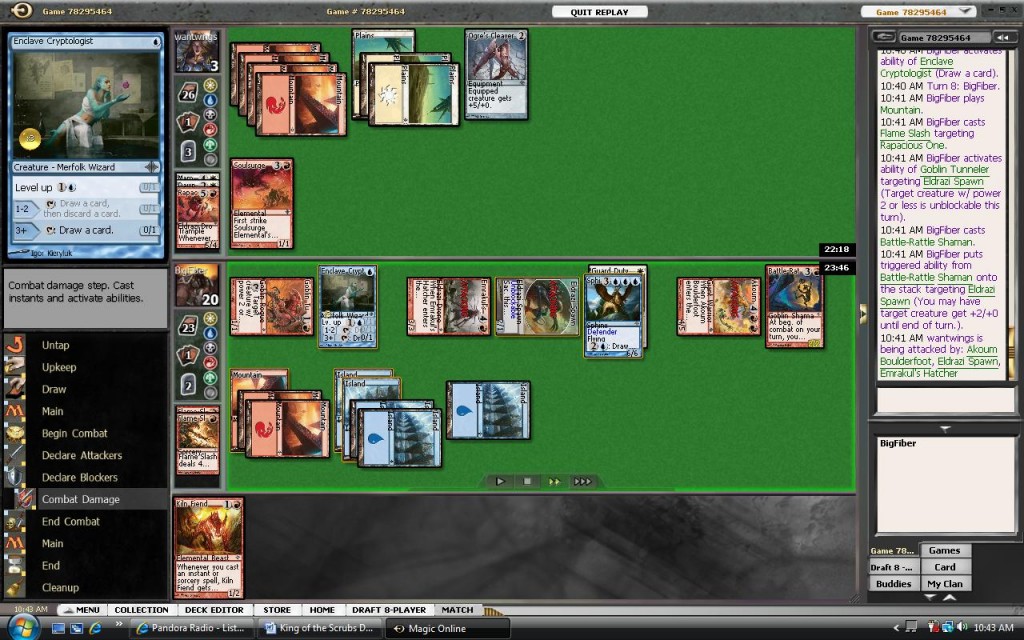 Magic is so much easier when you draw both your Flame Slashes and get to draw 2 cards a turn. I love this deck.

Game 3 I’m on the draw again and see 2xMountain, Cryptologist, Skywatcher Adept, Hatcher, Splinter Twin, Crusher. I keep because I’m on the draw, but that was definitely a mistake because I have no plays… at all. I’ve yelled at friends for making similar keeps, but I don’t do as I say. I think the possibility of Twin/Hatcher got me a little excited. {Facepalm} However, I did draw an Island and was able to play my Blue spells; the unfortunate part is that I was stuck on 4 lands for a couple of turns and my opponent was not terrible at Magic. There was a key turn where he had a Lavafume Invoker and Dawnglare Invoker. I had up 2 Islands and a Mountain and only a Cryptologist in play. He swung with both and I Staggershock the Dawnglare. He then enchants the Lavafume with Mammoth Umbra. I don’t draw my 5th land and can’t play anything. He swings and as I’m at 11, I chump with my Looter, and loot into a Flame Slash. He then plays a Rapacious One. On my turn I draw a 5th land, but feel like I need to kill the 5/4 or the game will get out of hand. I take 8 from the Lavafume (after he pumps himself) and now I’m at 3. Here’s where it gets really interesting. I draw Regress and I look and see my opponent has 1 card in hand and only has the Mammoth Lavafume in play. I could pass the turn and Regress his critter; pretty safe play, but I and every single person I asked, including Boss man Marin, agreed with my play of running out the Hatcher. I pass and my opponent draws and Flame Slashes my Hatcher and then Wraps my little 0/1′s in Flames… Wow. Nice. Top. Deck. Let’s move on to happier memories.

The 2nd draft is both interesting and frustrating, let’s find out why and don’t forget to check out my comments and find out when I should have jumped ship!

W/B control! If ever there was a deck that played for the long game, it’s this one. 2xGuard Duty, Vendetta, Corpsehatch and 2xSmite is a strong if unorthodox removal package that I think will do a good job to let me set up my win conditions of Trans Master, Crusher, Kozy! or random dude+Mammoth Umbra. The 2xAntelopes really turn this deck into a sort of toolbox and I love a deck that has reach.

Game 1 I keep Plains, Swamp, Antelope, Crusher, Wall of Omens, Cadaver Imp, Mammoth Umbra. Not the strongest opening 7, but fine because of the Wall of Omens. My opponent keeps his 7 as well. Turn 1 I play a Plains and he plays a Mountain. Turn 2 I draw Guard Duty and play a Swamp with my Wall drawing a Plains. My opponent plays another Mountain. Turn 3 I draw Repel the Darkness and put another Plains on to the battlefield. My opponent misses a land drop and has to discard… a Swamp?! Finally, someone else gets burned because they’re not paying attention to the game! Turn 4 I draw my Outrider and play him. My opponent does not play a land, ouch, and Forked Bolt‘s my Outrider. Turn 5 I draw a Plains, play it and pass the turn. My opponent draws and plays a Swamp and then puts a Lavafume Invoker on the battlefield. I draw my Transcendent Master (yea!), play and level him up one time and cross my fingers. I don’t hold out a lot of hope that he’ll live very long against a R/B deck. So far so good, as my opponent only plays a Bloodthrone Vampire. Turn 7 I draw my 2nd Swamp and Mammoth up my Master. Really the game pretty much ended right there, but my opponent didn’t think so. We went on for several turns but the Master with a suit of Iron Man armor is pretty hard to beat.

MODO ate the replay of game 2, but I remember that it ended with a fully leveled Master and my buddy Kozilek in play. The deck played out exactly the way I had hoped. It’s time for Round 2.

I have to throw back my opening 7 of 3xPlains, 3xSwamp, Smite for 3xPlains, Swamp, Antelope, and Dawnglare Invoker. Turn 1 we both play Plains. Turn 2 I draw Vendetta and play my Swamp while my opponent plays an Island and a Knight of Cliffhaven. I kill it at end of turn because I want to play my Dawnglare on my 3rd turn. I draw a Dread Drone and play my Invoker. For his turn, my opponent plays another Knight. I draw Dread Drone #2 and swing with my flyer. My opponent plays an Evolving Wilds and gets an Island with it and then plays Ogres Cleaver and hits me for 2. Opp (18) me (16). Turn 6 I draw a Swamp and play my Antelope. I think for a moment that the obvious choice is the Mammoth Umbra, but I realize that Guard Duty is the right call for my current position. I like this decision even more after my opponent plays a Halimar Wavewatch and an Outrider on his turn. Turn 6 I draw and play a Swamp and Dread Drone after swinging for 2 with my Invoker. Finally, I enchant his Knight with Guard Duty. On his turn, my opponent plays a Venerated Teacher and passes. Turn 7 I draw Repel the Darkness and pass the turn. However, my opponent draws and drops his bomb Deathless Angel. I take the opportunity and tap his 2 flyers with Repel and draw my bomb Transcendent Master. My decision to cast Repel looks brilliant as it got me that much closer to drawing Corpsehatch and casting it to kill the Angel. My opponent scoops in disgust.

Games 2 and 3 were also eaten by the MODO monster, but I remember that Game 2 went very long even though my opponent got out Time of Heroes and several levelers, including Brimstone Mage. I tried my best with a Umbra’d Dawnglare, but I was one turn too slow because I needed my 8th land to tap down his army of Crusher, Skywatcher Adept, and Hatcher. Pretty odd leveler deck… Game 3 was much more mundane as I recall going to 6 cards and keeping a 2 land hand and just not getting there. That was the Achilles Heel of my deck. I had a bunch of 5+ drops and if you draw poorly, it’s much harder to right the ship.

That’s it for this edition of King of the Scrubs and I hope you enjoyed my draft walkthroughs. That 2nd one was pretty wild and I’m sure that if I had gone Green early, I would have ended up with a stronger deck. Maybe not as interesting, but stronger.

Till next month, good luck and have fun!