I used to be a strictly competitive Magic player whose only aim was to do well in events, but as time has passed I’ve found that there is a lot of value contained in the casual/fun side of Magic. This is hardly news to most. Casual formats such as Cubing, Drafting, and Commander are more popular than ever. I enjoy these three formats on occasion but they suffer from being expensive and time-consuming forms of casual play, and if you’re anything like me, you’re looking for something different, something you can either play between rounds or for hours that also doesn’t have a massive price tag attached. Well, I’ve managed to come up with a few formats that meet those criteria, and I’m hoping that you’ll enjoy them as much as I have so far.

(This is analogous to the MTGO format “Momir Vig”)

My Free Magic deck is my pride and joy because even though the format has been around for longer than most forms of casual Magic, I rarely see anyone playing it, and now I’d like that to change!

For those of you who haven’t heard of Free Magic, it’s fairly self-explanatory. You have a community deck that each player draws from once per turn (no opening hand), and all spells/abilities are free. The upsides to this format are that it’s fast-paced, requires no setup (besides a bit of shuffling), and games usually end in just a few turns, but it’s very easy to start another. 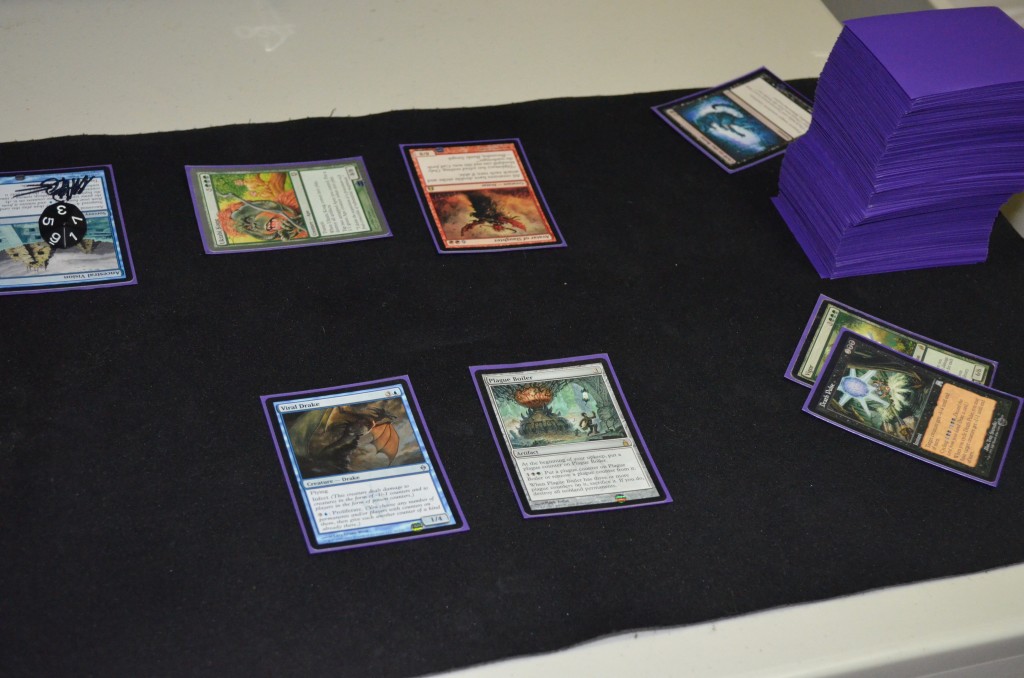 As for putting your own Free Magic deck together, you want cards that are big, impactful, versatile, and also fun! The only real construction rule is that you are limited to one copy of each card (I make an exception for 4 Accumulated Knowledge.). The specifics will become more obvious as you get acclimated with the format, but to help you get started, here are some guidelines on what to include and what you should stay away from:

I’ve been adding to my Free Magic deck for years, so it’s nearing 1000 cards, but you can start small and work your way up. Once you get started, adding new cards over time and as new sets are released will make the games more interesting and less repetitive.

Chancellors: Revealing a Chancellor on Turn 1 is fair game.

Cascade: If you hit something like Sickening Shoal you can choose a value for X.

Firebreathing: A lot of sweet cards can’t make the cut because of firebreathing (Akroma, Angel of Fury, Steel Hellkite), so I’ve given errata so that they pump -1/-0 instead.

Winnings: When you win a game of Free Magic, all the cards from that game are now considered your “winnings.” These are used for Wishing and also to determine the winner of a 2-player match.

Awkward Situations: Let’s say that in above picture the Viral Drake was controlled by the opposing player instead. This would create an awkward situation with the Plague Boiler. Both players would be able to activate their respective abilities infinitely many times, so who wins that fight? My group has decided to rule in favor of the defender, so in this case, the controller of the Plague Boiler would be allowed to remove the counters at will.

Variations of the Format:

Type 4: This is the same format except that you start with between four and seven cards but can only play one spell per turn. I consider this format slow and boring and thus not a great variation.

Star: A five-player format where rules are all exactly the same except that the winner is decided when the two players opposite him/her are dead. There are a lot of implications and politics in this format, which can make it pretty entertaining. For instance, if the person to your left is dead, you actually have to protect one of your targets or risk losing the game.

Money Games: In a two-player match, the wagering system is based on your winnings. You simply stack your winnings against your opponents at the end of the match and whoever has more wins a set amount (usually $0.10) per card that exceeds the opponent’s. Additional rules when playing for money are as follows:

Despite having a few superfluous rules attached, Free Magic is a pretty straightforward format that can be loads of fun to play. Hopefully I’ve inspired you enough to consider working on your on Free Magic deck, but we’ve still got more fun formats ahead of us!

(I refer to it as a “Pauper Cube” but it includes more than just commons, so it isn’t strictly that.)

Some may think that a Cube without rares is unexciting, but I would disagree. Just because it’s a budget-oriented format doesn’t make it a worse one. Rather than playing with all the best cards from Magic‘s past, you get to play with all the best Limited cards of Magic‘s past. Regular cubes will always be there, but if you want something different, something that more closely resembles a real Limited format, then this might interest you.

Much like with Free Magic, getting started on your own Pauper Cube is going to be the hardest part. If you don’t want to go all-in at once then I’d recommend starting with familiar sets and working backward. It’s very possible to make an entire Cube out of just the last few blocks if you so desire. But if you do want to go all-in on the idea or just need a good starting point, my Pauper Cube (and supplementary data) can be downloaded as an Excel file here, or you can just look at the lists of common and uncommon cards, respectively, in Google Docs here and here. There’s a lot of information available in the spreadsheet, and I’m sure that if you have any interest in the cube, you’ll have questions for me, which I will happily answer.

In regular cubes all the cards are usually shuffled together, ignoring all rarities, but since Pauper Cube is supposed to more closely resemble Limited, I keep the commons and uncommons separate and make packs in a fashion similar to a real pack (10-11 commons, 4 uncommons). This way the rarities still stand for something.

Variations of the Format:

2HG: Can be great when you have four players. We play this format often enough that I’ve added a few cards specifically for it (Urborg Syphon-Mage).

Free Magic: The uncommon section of my cube makes for a reasonable Free Magic experience. There are a few cards that wouldn’t normally be allowed (Rakdos Guildmage), but it’s still a fun way to spend some free time between rounds. Additional rules we follow when playing this are:

Team Drafting: I’d like to think that everyone knows about team drafting, but I figure I may as well mention it, considering it’s one of the most fun ways to draft/cube.

A lot of the time you won’t have eight people to draft (or maybe the cube isn’t big enough for eight), so having a draft that works with six people is great. For seating, you can either choose teams first and seat in alternating positions or you can seat randomly and decide teams randomly after the draft. I much prefer the latter because it tends to make the teams more interesting. Once you have the teams, you play in a 3v3 fashion until one team has 5 wins.

“Seven” is a format that a friend and I came up with to pass some time, which turned out to be something that I think is worth passing on. I wanted the format to eliminate some of the luck factor but still make for a fun, skill-testing game of Magic. In it, the most important skills to be tested and learned are mulliganning and planning out the turns of the game.

This is how it works: You start with a community deck that doesn’t include lands (Free Magic and the uncommon section of Pauper Cube have both made good stacks, but designing your own could make the format even better!). Decide who goes first, then both players draw their opening hands and make mulligan decisions. The catch is that each player gets a basic land of their choice on their respective turns, and there is no draw step. Your opening hand and an unlimited supply of basics is what you get to play with for the entire game. Naturally, draw spells are a little too good (and thus should be very limited in the design of the deck).

So far, in playing the format, I can say that I have not mulliganned as much as I should have, but I do think that playing more of it will advance my game and provide entertainment at the same time.

Being on the play in this format is always superior, so I’ve tried to come up with something to make it fairer. The best rule I’ve come up with so far is allowing the player on the “draw” to have a free mulligan. The people I’ve played with have yet to choose to be on the draw, but it at least makes it fairer.

I wrote this article in hopes that both casual and competitive players could find a new way to play the game of Magic, whether it be a quick round of Free Magic between rounds of a PTQ, a Cube draft among friends, or a new skill-testing format of your own to dabble in, and although I cited budget concerns at the beginning of the article, that’s not really what it’s about. For instance, my Pauper Cube originated out of a desire to build a cheap cube, but it’s grown into something more than that. It’s not the same old cube that, despite having sweet expensive cards, is something everyone has seen before. It’s something different that people might not recognize at first, and in that regard, so is Free Magic. I’ve had tons of people ask me what we’re playing, and I’ve always assumed that the phrase “Free Magic” would be enough of a response, but it never seems to be. But I don’t just want people to know what Free Magic is; I want them to take part in it themselves, to experience another side of Magic.

So, if you take away anything from this article, it should be that it was inspired by fun and the desire to spread it.

As always, you can reach me on…

…and right here in the comments (especially if you have anything to say/discuss about the contents of this article).