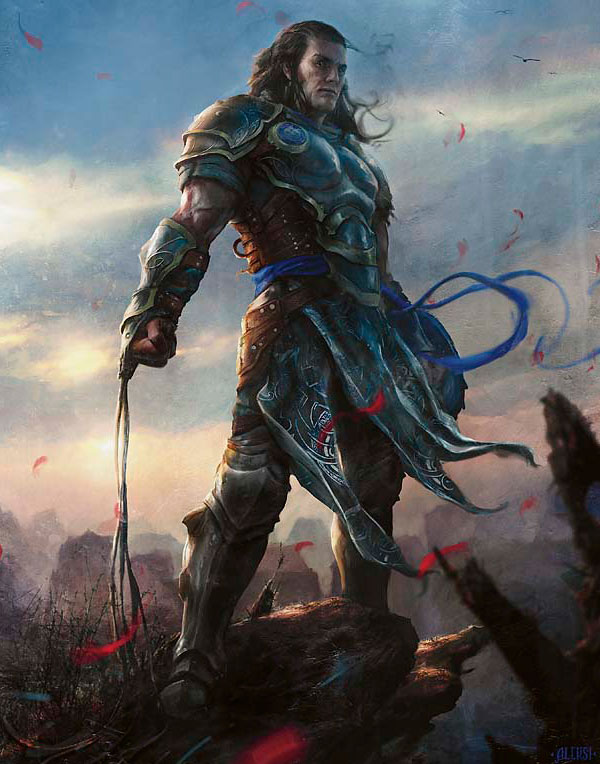 As I wandered through the desiccated ruins of the great hall, a wave of unease washed over me like water to the shore, chilling me to the bone. Cautiously, I scanned the room for the source while inching slowly towards my destination. One room to go and my quest for perfection would be at an end. It had been a grueling, yet terribly entertaining, path thus far, filled with bloody battles against snarling beasts and struggles for dominance against planeswalkers who would try to usurp that which is rightfully mine.

Turning the corner, my feeling of dread became enough to overpower the thrill of anticipation which had carried me this far. Someone was close. Someone powerful. I immediately began to gather my strength, seeking out the oldest of my sources of power—the plains of the countryside of my youth. Before I could find a good use for this power, the attack I had anticipated began.

A long howl echoed down the hallway behind me, accompanied by the skittering of paws on hard stone. I whipped around just in time to summon a wall of pure light to block off the young jackal as it lunged for my throat. The light of the wall served a dual purpose, temporarily blinding the jackal, as well as providing me an omen of things to come. The vision was brief—a small bluish vial filled with liquid knowledge.

The jackal snarled as it paced the hall, hackles raised, every so often stopping to test the wall of omens I had placed between us. A lupine grin crept over the jackal’s face, as if it knew that the ominous rumbling approaching from behind it was reinforcements. Rounding the corner into view came the two largest goblins I had ever seen. It looked like they would soon be able to overwhelm my wall and get to me. I had no other defenses available to me at the moment, simply forced to continue to grow my strength until a better opportunity presented itself.

Before I got the chance to set up any more defenses, a new threat entered the fray. At first, it appeared to simply be a massive log with a half-dozen little legs churning it forward. As it approached my barrier, I could see that it was actually a battering ram carried by a trio of small goblinoids. Together with their flunkies and the jackal, they charged right at the center of my wall. The flunkies, clearly not the most enlightened of creatures, became easily distracted by the flashing lights of my barrier. I was not so lucky with the other two. The jackal pup attached itself firmly to my heel, locking me in place as the ram plowed squarely into my chest. Hurtling backwards, I was relieved that I had at least been knocked clear of my attackers for this brief moment.

Now with a tad more breathing room, I reached into my coat and fished out a small vial of faintly glowing, bluish liquid. It was called serum, and it was fabled to contain purified knowledge, of which I was in desperate need. The portent offered by my barrier proved to be true, as the knowledge rushing through me gave me a new insight into my situation. I knew how I could survive this onslaught. Sadly, in my rush to enact my defense, I dropped a small, vaguely brain-shaped stone from my pocket. It was a small price to pay for the knowledge I gained.

With a start, I dropped to my knees and began to pray. As the incantation droned out, a faint light began to fill the chamber. It picked up intensity until it became as if the sun itself had come to rest in this very chamber. As soon as the light became so bright that I felt as though my soul itself would burn, it soundlessly exploded, leaving just the sound of my breathless panting behind. God’s wrath had spared none. Even my barrier of light had been absorbed by the pure light of His retribution. Unfortunately, now that it was clear that I was resorting to a little divine intervention, my opponent decided it was fair to return the favor. A demonic howl tore through the silence as a massive cloud of sulfur and brimstone erupted down the hall at me. It was fast, too fast. Before I could react, the hellish wave thundered over me and just as quickly dispersed. Its damage was done, though, and I was left reeling on one knee. I needed to enlist some more help, and soon.

Luckily for me, I had come to the aid of a fellow planeswalker on a previous journey, one that I could trust. At least I hoped I could. I closed my eyes and began to search him out.

No sooner had the thoughts entered my mind than a gleaming suit of armor appeared in the sky before me. Slowly, the form of a man coalesced within it. A tall man, well built with the bronzed skin of one who has spent much of his life under the sun, Gideon Jura always struck me as having the air of a soldier. No, more like a general. Simply his presence is commanding, though he seemed to command more through his actions than his surely spoken words. The thing about him that I will never forget, that struck me the most, were his eyes. Like pools of sadness, his eyes reflected a man with tremendous inner turmoil. Someone desperately trying to escape something. Regardless of what he may be running from, those eyes also spoke strongly of honor and conviction. Of one in whom I could trust, a rarity among our kind. It was because of those eyes I helped him in the first place. It was because of that help that he now came to my aid.

With a roar, he exploded into being in front of me, challenging all to test their worth. Solemnly, he surveyed the room before him before his eyes came to rest on me. He raised an eyebrow and let something of a small smirk to cross his face.

“This is…less than I was expecting,” he said with a small amount of disappointment in his voice.

“Don’t worry,” I told him with a smile, “This fight’s just beginning.”

Almost on cue, we heard the crackle of electricity resonate in the chamber. Bolts began to lick the air, reaching to all corners before condensing into the shape of a massive, jawed beast. The lightning beast was fast, charging across the floor at a blinding speed. I barely had time to cover my eyes before the beast lunged for me. After a brief second, the realization that the beast hadn’t made contact with me began to settle in. Along with the smell of burnt flesh. I’m not sure how he had managed to move so quickly, but Gideon had stepped in the way, taking the full force of the beast’s attack. Still smoking, he snarled as he shoved the beast back across the room.

Gideon unsheathed his sword and closed his eyes. A faint glow surrounded him as he opened them, glaring at the lightning beast.

“I dare you to try that again.”

With Gideon doing a great job of maintaining the beast’s attention, it fell to me to begin to take control of this situation, and I had just the thing to help. Reaching back into my coat, I pulled out a small pair of dull metal shackles. Though they may not look like much, these shackles concealed an incredible power, though their user must have a strong tie to the islands near their creation for them to be most effective.

Turning back to the fight, I noticed the familiar smell of sulfur and brimstone wafting up to my nostrils. I was ready. Just as before, a demonic thundering ripped through the air as a cloud of hellish vapor coalesced beside the lightning elemental. As they geared to charge, I quickly threw the shackles at the cloud. A bolt of energy sparked to life, connecting my outstretched hand to the cloud. Immediately, it halted in its tracks. With my free hand, I shot a beam of pure white light at the rampaging lightning elemental, sending it into exile right before it crashed into Gideon, who shot me a quick glance and nodded his head. No more than a second later, the cloud that I had imprisoned in my shackles melted away to nothing, the clang of the shackles ringing as they fell to the ground.

With this recent wave of attacks abated, Gideon shouted into the darkness, “Is that all you have? I’ve had ales stronger than you! Here I am, coward! Come out of that darkness and show me what you’re really made of.”

The silence that answered was deafening. I drew upon a part of my strength to summon another old friend. A mist began to fill the air above us. From the center of this glowing cloud emerged the figure of a man. Clad in long crimson and azure robes, the pale figure above us reached up to stroke the long ears he had tied back over his head. The runes that lie where one would expect eyebrows flashed in surprise as a smile crossed his face.

“And I was in the middle of such a good book, too.”

“Good to see you too, Meloku. I could use your help here.”

“You? Need help? Heaven forbid,” he said with all the fake shock and sarcasm he could muster. Out of the corner of my eye, I caught the briefest smile on Gideon’s face.

With a sigh, Meloku floated amidst a cloud towards the hall from whence the attacks had come. A light, bright enough to illuminate the unearthly shadow matting the hallway, erupted forth, headed straight for Meloku. In that flash, I could just barely make out the face of a man, contorted in what appeared to be pain. The fire he conjured raced for Meloku, and I had just enough time to send Meloku a portion of my power before the fire consumed him. The cloud surrounding him evaporated in a hiss as he burned away to nothingness, returned to the realm from which I had summoned him. All that remained was a small wisp of a cloud, vaguely humanoid in shape, that floated back to take position over my head. A parting gift from Meloku it seemed.

As if summoned by the vacuum left by Meloku, a figure stepped out of the shadowy hallway. He was a tall man, just a hair shorter than myself. His reddish hair was cropped close to his head, and a beard framed a mouth curled up into a devious grin.

“Two against one, eh. I can’t say I like those odds,” he chuckled as he began to pace before us. “And those shackles, nasty. Children like you aren’t meant to have toys that nice.”

As I made a desperate move to retrieve my shackles from the middle of the room, the planeswalker before me snapped his fingers and a small, gangly goblin burst forth from the shadowy veil behind him. In one swift motion, the goblin scooped up the shackles and danced around, smashing them into every hard surface he could reach, giggling all the while.

“There. With that attended to, shall we begin?”