The last few months have been rough for Vintage on MTGO. For a 2-3 month stretch, Daily Events rarely fired and it seemed like the format was on its death throes. A couple months back I made some suggestions to Mike Turian that I felt would help the format recover.

The first suggestion I had was to cut back on the number of DEs that were being offered. Far too often events would get to 8-12 people (sometimes even as many as 15) and fail to fire. This only leads to people getting discouraged and giving up trying again in the future, thus making them less likely to fire. It was clear that there were too many events being offered. Now, while I suggested to cut back on the DEs, it was not my wish that WotC eliminate all weekday DEs, but that was the path they chose to take.

The next suggestion that I had was to create a sort of Vintage MOCS where every couple of months there would be an invite-only large Top 8 Vintage event (people would qualify through DEs). It was with this in mind that the Holiday Festival Vintage Championship was born. I figured that such an event would be well received by the community, but I had no idea it would be this positive.

Over the course of ~10 days, players were able to qualify for the Holiday Festival Vintage Championship by either finishing 4-0 in a Legacy DE or by finishing 3-1 or 4-0 in a Vintage DE. When players requested weekday Vintage events be added to the schedule, WotC obliged and offered Tuesday and Thursday events in addition to the weekend events already being offered. The first Thursday afternoon Vintage DE (2:30pm EST) saw 48 people participate. Yes, forty-eight people. For a format that struggled to get just 16 people on Saturday afternoons in the weeks prior, we managed to get 48 people on a weekday afternoon. Clearly, the prize support offered by the tournament was a key driver to this success, but one can’t attribute all of it to simply the prize support for a tournament that they would need to qualify for first in order to even have the ability to play for the prizes being offered.

Nonetheless, this past Saturday, 134 people participated in premier-level Vintage on MTGO for the opportunity to win some great prizes. Presumably, far more than 134 people actually qualified for the event. I assume there were a fair number of people that either had no idea they qualified for the tournament or were unable to participate on Saturday. What struck me was how many players I had never seen before. While there were many names that I was familiar with from either playing in DEs or in the Tournament Practice room, there were lots of other names I had never seen before… most of which owned Power. I played miserably in the tournament, but all 3 decks that I played against were fully Powered. I played against a Grixis Control, URg Delver, and an Esper Jace-Tezz deck.

The story of the tournament was the performance and sheer number of Treasure Cruises (specifically Delver of Secrets decks) in the top levels of the field. Another sub-plot was the performance of the competitors of the Vintage Super League, which 9/10th’s managed to qualify and 3 made the Top 8 (including the top 3 spots!).

Delver represented 9 of the Top 32 decks in Saturdays Championship. This was in contrast to the Vintage Masters Constructed Championship in August of this year where 1 Delver deck made the Top 8 (finishing 5th) and only one other Delver deck finished in the Top 32 (31st). Clearly, the difference is that Cruise has pushed the deck into the top of the metagame (online, at least) since this summer. When looking at the overall pre-Khans metagame of the VMA Championship, the field was pretty robust. Here is a pie chart of both events Top 32 metagames: 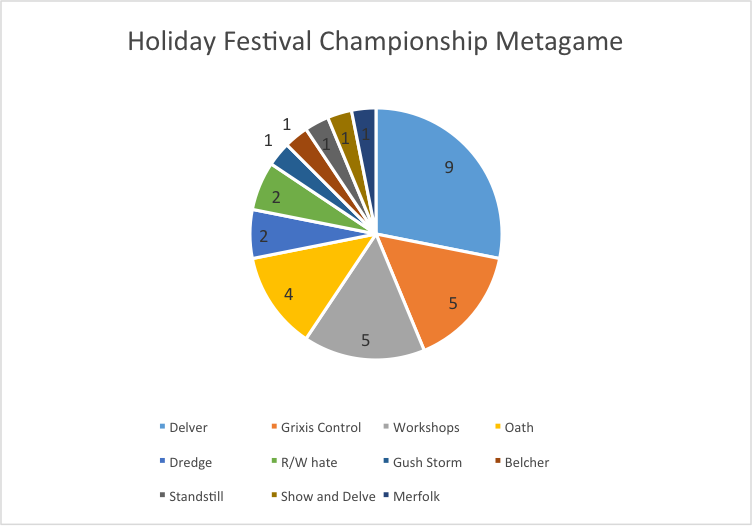 Perhaps more important than the sharp increase of Delver decks, is the overall number of Treasure Cruise across the tournament. 15 of the 32 decks played at least 1 copy of Cruise in their deck (all maindeck) with a total of 44 copies in the entire Top 32, an average of just under 3 copies in decks that sported the card. When you discount those decks that can’t possibly play Cruise, it looks even more oppressive as only 23 decks can reasonably cast a blue sorcery spell. As a point of comparison, 12 decks sported some number of Jace, the Mind Sculptor (2 were as a 1-of in the sideboard), however), yet only 18 Jaces could be found in the entire Top 32. In August, 15 decks sported Jace (all with at least 1 maindeck) with 31 copies in total. The decline of Jace and rise of Cruise is quite telling.

Of course, it’s premature to read too much into just 2 large events on MTGO and make definitive statements. They do, however, show the shift that is taking place. Many people question why such a drastic shift isn’t being seen in paper tournaments, and I can only assume it’s because people are not as experienced with the deck in paper and/or avoiding the deck altogether. There are clearly more people playing Delver on MTGO than there are in paper, and Delver isn’t taking over the paper tournaments when it is seeing play. It seems that it’s a combination of both factors.

Regardless, calling the results on MTGO an aberration is clearly ignoring the obvious. Delver is Tier 1 in Vintage and it’s arguable if there are any other decks that can stake that claim. Sure, just about any deck in Vintage is able to take down a tournament with the right amount of play-skill and fortuitous variance, but Delver is the most consistent deck, bar none. No other deck can easily shift gears between Control and Aggro… and not just in the same match, it can do it in the span of 1 turn in a single game.

Enough about Delver and Cruise, though, as the rest of the field showcased some interesting decks, starting with the runner-up, Randy Buehler:

Randy’s deck is a (relatively?) new take on Belcher and something that isn’t seen too often. I believe that Randy is quite experienced playing Belcher (not to mention a Hall of Famer), which would certainly explain how he was able to navigate a 134-person field. I’m not too familiar with Vintage Belcher, but it would seem that a field littered with Delver decks might be ripe for success. Also, almost no one is playing Null Rod these days, which would absolutely neuter this deck if someone dropped it.

Undoubtedly, the most interesting deck from the entire tournament is the RW hate deck piloted by Call1Me1Dragon and Lejay:

Decks similar to this have been called “The Mountains Win Again” and more recently, “Simian’s Mom”. Here, the deck tries to hate on the expected metagame of Blue Decks and Workshops as it packs plenty of “sideboard” hate cards for each matchup in the main deck. One might notice something that the deck is lacking: Power. On MTGO, it’s not really that much of a cost gap to pilot this deck than say a Delver or Workshop deck (thanks to the cost of Wasteland), but in a sanctioned paper Vintage match, this deck is clearly “budget”.

Perhaps what recently propelled this deck to another level is the addition of Containment Priest. There really hasn’t been a home for the new hate bear from C14 in Vintage due to the dominance of Volcanic Island and a lack of Tundras running around, yet it is a perfect fit for this deck. I briefly spoke to Call1Me1Dragon after the tournament ended and he informed me that the card did some yeoman’s work for him during the tournament. It’s a great card to have against Oath and Dredge and can shore up those two matchups where few other hate bears (in Red-White, at least) can do the trick. Ironically, this deck is (along with the single Merfolk deck) one of the only decks in the field to use Null Rod, and yet Randy Buehler was able to take the match against Call1Me1Dragon in the Quarterfinals.

Going forward, it’ll be interesting to see how many people keep up the momentum created by the Holiday Festival Championship and continue to play in the DEs without the lure of foil sets of VMA. The Holiday season might throw a wrench into the situation is many people are traveling. I’m not going to be able to spend much time on MTGO over the next 2 weeks, but maybe others will have more time than usual on their hands?

I’m sure the powers that be at WotC noticed how successful the tournament was and will decide to support Vintage with similar tournaments throughout 2015. The prizes don’t have to be so stacked; there just needs to be a large enough carrot at the end of the string, so to speak. I’d also like to see the return of weekday Vintage DE’s at the 5:30pm PST time slot, if possible.

Nearly everyone I’ve heard from thoroughly enjoyed the entire set-up and had fun playing in a large Vintage event on MTGO. If you want to keep seeing similar tournaments going forward, please voice your opinion to Mike Turian on Twitter (using the #MTGO hashtag) and please continue jumping in the DE queues!