It truly is a fortunate day for us at MTGO Academy (and, for that matter, all Magic Online players who love cards playable in Eternal formats). The kind folks at Wizards gave us two wonderful preview cards for the upcoming Masters Edition IV set, which will arrive on MTGO in early January 2011! Both preview cards hark back to the earliest days of cardboard spell slinging, and both will be gladly welcomed into the Classic cardpool. It’s Christmas in November â€” time to open our presents. 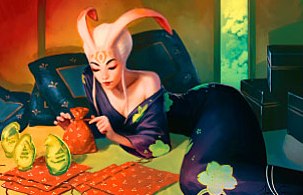 Competitive and casual players alike have always loved generating obscene amounts of mana. Got a nice Glimmerpost, Cloudpost, Vesuva land mix? You’ll have to do better than that. Just purchased a trio of Urza’s most coveted real estate? That’s nice, but there’s still room to impress. Now that all mages have overcome the burning pain of unused mana, there isn’t even a downside to accumulating ridiculous amounts of it early in the game. Even if it isn’t in the next $T4KS Classic/Vintage bruiser, this preview will surely please many MTGOers.

But our first spoiler spotlight doesn’t stop being useful for mana production alone, utility-providing lands will love it too! Thought Thawing Glaciers, Maze of Ith, or (the soon to come) Rishadan Port were annoying, ahem, powerful by themselves? Now, they have the potential to be precisely twice the thorn in your opponent’s side! This is proof again that, indeed, old cards can learn new tricks.

By this time, the majority of readers have most likely have skipped down to the spoiler tag and peeked at the card that has demanded so many words; if you’re still here, we implore that you resist the urge of instant gratification and join us for a brief journey into the colorful history of Magic: Long before we knew of planeswalkers and their ability to travel the Multiverse, the mages and wizards of Dominaria supplemented their land-based mana production with the relic about to be revealed. No doubt a spellcaster of yore would have used it for conjuring a blistering Fireball, harnessing an erupting Braingeyser, or wading in an overflowing Stream of Life. It’s a wonderful cog (one mana artifact) from a time of two brothers: Antiquities. With Urza’s namesake lands (Urza’s Tower, Urza’s Power Plant, and Urza’s Mine conveniently reprinted and taking the place of basic lands in MEIV) filling mana pools left and right, it’s no wonder that one of the great artificer’s understudies would follow in his master’s manalicious footsteps with such a creation. Trinket Mage, eat your heart out. 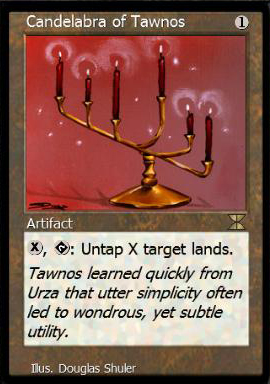 While our first preview card may be viewed to be more on the casual end of the spectrum, this second card is one that Spike will certainly be excited about. (Don’t worryâ€” Timmy and Johnny will love it too.) It’s flashy; it’s powerful. It even has a ton of synergy applications.

The timing of this preview is quite good, as if you’ve recently purchased the “Boltslinger” Magic Online Deck Series pack, this card will make a nice addition to your collection and go a long way in transforming the deck from Legacy to Classic (or Vintage). But this isn’t a “burn” cardâ€” it’s a brutal card. In fact, it’s been restricted in paper Magic for quite a long time (almost since the creation of the restricted list itself). It’s a combo card that even feels at home in a Zoo deck, and it has a drawback that could be misconstrued as a selling point. Wizards is bringing back Beta goodies in style. There’s not much more men without sparks can say, except that you have to see this for yourself! 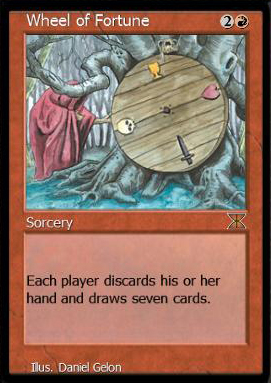 NOTE: This card’s actual rarity has been switched to “normal” rare.

Thanks for sharing in the joy of freshly spoiled Magic cards with us! Remember to watch the What’s Happening page for information on the upcoming release of Masters Edition IV this coming January!